for strong bloody violence, language and some sexuality/nudity. 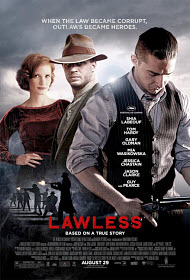 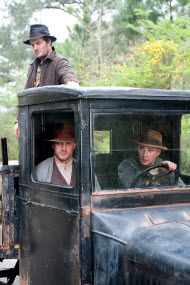 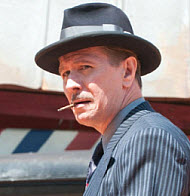 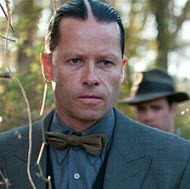 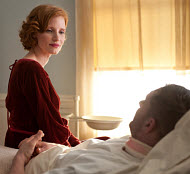 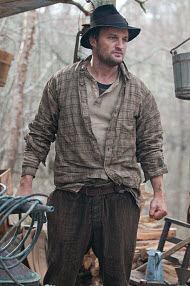 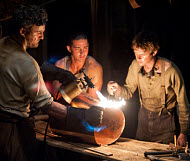 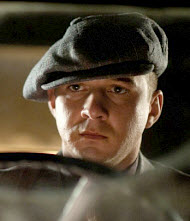 novel: The Wettest County in the World

“Lawless” is based on the true story of the bootlegging Bondurant Brothers in the Prohibition-era. The films open with the 3 brothers quarreling over shooting a pig. This auspicious start sets the tone for the violence to come. The Bondurant Brothers built the reputation of being invincible. While operating their bootlegging business, a new special deputy comes to town and demands the brothers grease the wheel. The brothers refuse, and the story take off.

Right off the top, the male cast is beyond superb, with stand outs being Tom Hardy (Forrest Bondurant) and Guy Pearce (Special Agent Charlie Rakes). I must also mention Gary Oldman, who has a smaller role (Floyd Banner); I wanted to see more of him. His acting is that good. The female cast, I felt, lacked and brought the film down. Even though I watched the film from beginning to end, I felt as if I walked in during the middle; there wasn’t enough backstory to fully hook me, and I relied on the actors and not so much the plot for substance.

With a film about Prohibition, alcohol use is a given; all the characters drink and some are shown drunk. Jack Bondurant (Shia LaBeouf) is shown drunk in church, attempting to court the preacher’s daughter Bertha Minnix (Mia Wasikowska). The violence is severe. From fistfights to gunfights and murders, I had to shield my eyes, and I couldn’t believe how horribly vivid the violence was. There is quite a bit of female nudity; I had to again shield my eyes. There is also a prolonged sex scene. The films is LITTERED with blasphemy and swear words; I lost count.

The Bondurant Brothers are portrayed as heroes, even though they are breaking the law, murdering their enemies, lying, drunkards. This portrayal is only pulled off because of the acting of Guy Pearce as the morally bankrupt evil lawman. The contrast brought me to view both men the way God views them and us. We are all sinners, even though we (me included) love to point the finger at those who we deem evil or wrong, and we rarely reflect upon ourselves.

1 John 1:8—“If we say that we have no sin, we are deceiving ourselves and the truth is not in us.”

We, as Christians, must remember, who we were before Christ and openly share who we are now with Christ to those who are now where we once were.

I do not recommend this film, at all. The acting is amazing, and there are bits of humor, but this was almost completely overshadowed by the objectionable content and gratuitous and insulting blasphemy.

Negative
Negative—If you think God is joking when he warns against taking His name in vain, then this is the movie for you. I personally walked out after about the 10th GD this, GD that in the first twenty minutes. In the first ten minutes, nobody says anything that isn’t profanity or blasphemy. In the edited version, this will be a silent movie. The story is good, the acting is good, the photography is good, but I wouldn’t want to be responsible for causing/subsidizing all the blasphemy, to say nothing of all the profanity. Wait for the edited version. It will be about 10 minutes long. It’s a pity Hollywood has to ruin such good stories with all this trash.
My Ratings: Moral rating: Extremely Offensive / Moviemaking quality: 5

Mark Summers, age 55 (USA)
Negative—Very rarely do I stop watching a film. Even if a film turns out to have more objectionable content than I’d expected, I usually see it through to the end, so I can be fair in my evaluation of it. I was prepared to skip the sex scene when watching this film… but I didn’t even get that far! I actually don’t remember hearing that much blasphemy, and the violence isn’t all that gory. But it’s the unnecessarily repugnant nature of the violence that caused me to stop watching this film.

First of all, there were no good guys during the part that I watched. There was no one I could root for, all the characters were incredibly depraved—if not in one extreme, then another. I don’t know (though I have my educated guesses) if any of them are made to look good in the end, or if the film teaches the truth that evil can’t be fought with evil. But ultimately, I don’t care, because I couldn’t recommend this film either way. I shut the film off at the scene where the lawman drops the jar containing a man’s severed, ahem, part of the male anatomy. I’d simply had enough.

It’s been a while since I felt so sick while watching a film, so I’m glad to have that scene to point to as my reason for shutting it off. Again, as a reviewer, I do my best to avoid making statements like this without seeing the whole thing, but I believe this film is unredeemable.

Gabriel Mohler, age 26 (USA)
Negative—I can usually make it to the end of a film, but the blood and violence just got to be too much. So, we turned it off. You want the local guys to stand up to bullies, except everyone is a bully with, it seems, no conscience. I just went away with bad images in my head and nothing to lift my soul.
My Ratings: Moral rating: Extremely Offensive / Moviemaking quality: 4
Jane, age 59 (USA)