for language throughout, drug use and some sexual references. 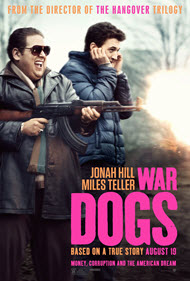 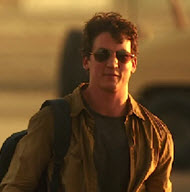 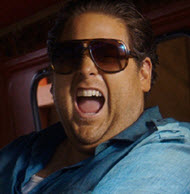 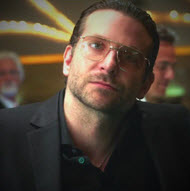 David Packouz (Miles Teller) hasn’t had the best of luck lately, especially in the work force. Working as a traveling masseuse in various rich neighborhoods is not making ends meet for him and his girlfriend, Iz; neither has working a second job as a nursing home linens salesman. To top it all off, Iz tells David that he’s about to become a father.

As luck would have it, while attending a funeral for one of his classmates, his best friend, Efraim Diveroli (Jonah Hill), is in town. Efraim confides in David that while he has been out of the region he has acquired great wealth. How? By means of bidding on military contracts and selling weapons to the U.S. military, through his own corporation AEY. Efraim offers David the chance to learn the trade, which in turn will allow David to go from “rags to riches.” Knowing he can’t support his family in his current field, David agrees to go into the international arms dealing business with Efraim.

Sure enough, it pays (pun intended) off. But it’s only a matter of time before the methods involved with accumulating that wealth catch up with David and Efraim… for better or for worse.

Clocking in at almost 2 hours in length, “War Dogs,” in my opinion, avoids dragging its pace. What really help is the strong chemistry between its two leads. Jonah Hill and Miles Teller balance each other out beautifully. However, it is Jonah Hill I found the most impressive. Mr. Hill has not done many films like this; for the most part, it film takes the subject rather seriously, rather than comedic. It is because of these two leads, though, that I found enjoyment with a film that is generally not a genre I often view.

Perhaps I had hoped for more comedic moments in “War Dogs.” Because of Jonah Hill’s comedic history (as well as that of Miles Teller), it could easily have been utilized more, which would have strengthened the character development between Efraim and David.

Please be aware this next section contains explicit sexual content and dialog. Viewer discretion is advised.

Sex/Nudity: This content is extreme and incredibly inappropriate. Sexual dialog includes, but is not limited to: Efraim telling David he’s had sex with David’s mom, a couple males telling David he “j*rks off people for money” (this is heard several times throughout the film, dialog involving prostitution, references to male genitalia, and references to sexual acts. In the beginning, while David is massaging a male client (and not looking), the client, while face down on the table, takes off his towel, exposing his bare buttocks to the camera. Other scenes include: Iz in revealing lingerie, passionate kissing (one involving a sexual scene that is cut off) between David and Iz, David and Efraim partying at a strip club (female dancers in revealing bras and panties), and women are seen in bikinis.

Violence: Violence includes a bar fight scene between Efraim and the boyfriend of a woman Efraim is “hitting on.” A man is taken out to a car, punched and has a gun pointed at his head. In another scene, a man is beaten severely. There is a violent chase scene involving armed Iraqi men and scenes involving dead bodies and blood.

Money is a necessity of life for most… plain and as simple. And yet, in peoples’ quest for wealth, many never seem to have enough of it. If they have plenty, they require more, and when their wealth fades, so does their apparent state of happiness—although money can never bring true happiness. In a world full of materialism, whether it be 2000 years ago or the present, Jesus warns us of the dangers associated with greed and the love of wealth, which leads to destruction:

“For where your treasure is, there your heart will be also” —Matthew 6:21

“No one can serve two masters. Either you will hate the one and love the other, or you will be devoted to the one and despise the other. You cannot serve both God and money. –Matthew 6:24

And in other parts of Scripture:

“Whoever loves money never has enough; whoever loves wealth is never satisfied with their income. This too is meaningless.” –Ecclesiastes 5:10

We are faced with the hold possessions can have on us. In the Gospels, a man comes to Jesus asking what he must do in order to inherit eternal life, to which Jesus replies:

“…If you want to be perfect go, sell your possessions and give to the poor, and you will have treasure in heaven. Then come and follow me. When the young man heard this, he went away sad, because he had great wealth. Then Jesus said to his disciples, ‘Truly I tell you, it is hard for someone who is rich to enter the kingdom of heaven.’” –Matthew 19:21-23

Our wealth, our fulfillment, MUST be in Jesus. Nothing else matters! He reminds us that this world will wither; its materials will wither, as well. But the Lord IS forever, the One we can rely on to stay strong and provide the fulfillment we seek.

“For I have learned to be content, whatever the circumstances may be. I know now how to live when things are difficult, and I know how to live when things are prosperous. In general and in particular, I have learned the secret of eating well or going hungry, of facing either plenty of poverty. I am ready for anything through the strength of the One who lives within me.” —Philippians 4:11-13

With all that “War Dogs” has going for it, cinematically, it is a shame there is such an abhorrent amount of objectionable material. I cannot, in good conscience, recommend “War Dogs” for viewing.

Negative
Negative—This seemed like an interesting movie (judging from the title and description), when I decided to go see it on the spur of a moment. The language was disgusting. The story would have been better off without it. It did make some interesting points here and there. But I can’t recommend it, especially for family viewing.
My Ratings: Moral rating: Very Offensive / Moviemaking quality: 2

Fred, age 62 (USA)
Movie Critics
…Jonah Hill is a standout in “War Dogs”… The film is loaded with a gripping plot and enjoyably sketchy characters but hobbled by an uneven tone that ricochets between zany comedy and serious crime thriller. …

Todd McCarthy, The Hollywood Reporter
…“War Dogs” is a self-satisfied testosterone fest …At best, “War Dogs” is a missed creative opportunity; at its worst, it’s a quasi-celebration of two vile schemers, one that ignores the brutality of the world they capitalized on. …

David Sims, The Atlantic
…a profane cautionary tale… a moral that should be pretty self-evident. And one that doesn’t require sitting through two hours and nearly 200 profanities to take seriously. [1/5]

Adam R. Holz, Plugged In
…too many expletives, too little honesty… the repeated ditching of scruples and truth, coupled with an unending stream of expletives and lots of marijuana use, weighs WAR DOGS down. …

Ted Baehr, Movieguide
…“War Dogs” is a film about horrible people that refuses to own the horribleness. It's too enamored with its glib arms dealer heroes…

Richard Brody, The New Yorker
An amoral movie about an immoral “true story”… dark comedy… There aren’t a lot of profound revelations or poignant observations…