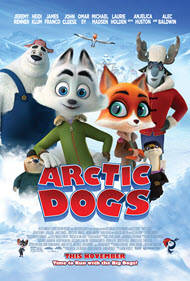 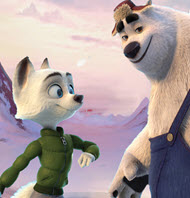 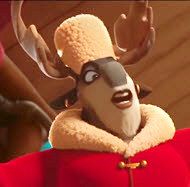 Feeling isolated, lonely and ‘invisible’—of no importance or value 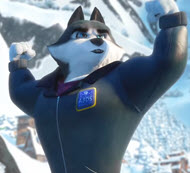 Wanting to be the ‘Top Dog’ 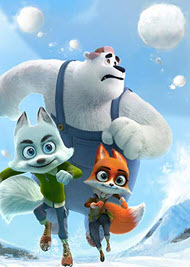 Realizing that what really matters is doing what you can, big or small, to make the world a better place

Being a true hero 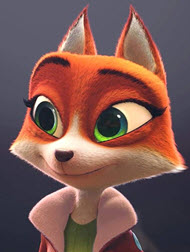 Depending on others is not a sign of weakness 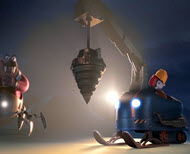 The villain wants to accelerate global warming by drilling in the Arctic and unleashing masses of ancient gas to melt the polar ice caps and flood the world. 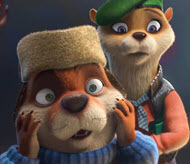 “I just wanted to be noticed.”

Featuring a host of famous voices, this latest offering from Entertainment Studios offers an original story-line and some surprisingly good messages, even if it’s not the best production quality.

A story of glory

A small, skinny, ordinary—but cocky—Arctic fox named Swifty (Jeremy Renner) has felt invisible during his childhood, so has dreamed of and worked towards becoming a famous mail delivery Top Dog. He thinks this accomplishment would also impress a beautiful engineer: his tough friend Jade Fox (Heidi Klum) who has just returned from traveling the world. But even though Swifty lands an important mail-room job, his boss Magda (Anjelica Huston) won’t let him ascend to the position he really wants. How else can he become the great hero he longs to be? What will it cost to get there?

Becoming impatient, Swifty tries to make delivery runs to prove his value. Reluctantly helped by a polar bear named PB (Alec Baldwin), Swifty’s quietly wise best friend, and Lemmy (James Franco), an Albatross with a fear of flying, Swifty discovers that a forced kind of victory is not sweet, when it’s not properly earned. It has landed both he and his friends in a lot of hot water and has damaged his honor.

Humbly doing what is right

Meanwhile a vengeful Walrus with ambition much like Swifty’s, hatches a plan to destroy the town and take over the world that rejected him, using B.A.D. Gas. The clues that Swifty and Jade have stumbled across can stop the evil Otto Von Walrus (John Cleese) in his tracks and save the town. But Swifty can only achieve it by humbly embracing the very thing he’s been running away from: invisibility. Perhaps he will finally realize that it’s more important to do what’s right than to chase a dream.

Though not as well-financed and artistically detailed as other ice-and-snow films like “Happy Feet,” “Arctic Dogs” does quite well. The opening credits are set on a creative picture-book background, and the remainder of the film steers clear of becoming glary or drab in the white polar environment. Bright colors, especially green, blue and orange, contrast cozily and are softened with careful texturing and lovely lighting. And although the villain does look grumpy, heavy and imposing, he’s not too dark and terrifying—nor likable—for youngsters. The voice cast, too, are interestingly diverse.

There’s nothing to get particularly excited about in the music soundtrack, neither great nor poor, but it works fine. I’m not sure how many people will end up liking the film enough to purchase it for their DVD collections, but it’s quite respectable and contains no great annoyances.

Most of the concerning content is mild and typical of movies for elementary schoolers, whom the makers are targeting. Bathroom jokes about animal nudity (which is natural anyway) and bad gas are most common. Violence is limited to snowball fights, comedic thumps (or squeaking noises, if a cute little puffin is the victim) and pistols that shoot sleeping gas.

“Darn,” “bloody” and “floody” (shortly thereafter) are the only instances of concerning language, though I was also surprised to hear one character randomly refer to her ex-husband running off with someone ten years younger. There is a small amount of theft, kidnapping and someone’s habit of ‘stretching the truth’… and of course, the villain does many unkind and selfish acts without care for the consequences. Two characters are French ‘conspiracy theorists’ who wear pullovers that have the Illuminati all-seeing eye symbol in the center, but no words, nor is any other mention made of this.

So, while some of these may raise opportunities for you to talk with children about real-world parallels, the film itself is unlikely to guide them astray or fill their minds or mouths with filth.

The film does include a politically correct global warming crisis message, but not nearly as heavy as I expected. So, by today’s standards, I would not consider this an especially troublesome film.

The main themes of this film are isolation and the loneliness of feeling ‘invisible,’ chasing a dream of fame, and realizing that “what really matters is doing what you can, big or small, to make the world a better place… being yourself along the way.”

Like many young men these days, Swifty trains with weights and tries to pep-talk himself into the sort of person he wants to become: a bulky, memorable ‘Arctic strong’ dog who can deliver all the important items that everyone in the Arctic relies on. But he is a small Arctic fox, not a big dog, and his delusions only get him into trouble. Like some of our kids, he needs to accept that he is loved just as he is, already, that fame wouldn’t make everything happy anyway, and he already has an inbuilt purpose that matches his personality and strengths. It’s good for children and teens to see this journey play out on the screen in a relatable and fun way, and especially to witness the confessions and repentance of two characters who have become carried away with their dreams and ambitions.

Adding the spiritual dimension found in The Bible, we can respond to this with the kind of deep comfort for our kids that we would have loved to receive during our own youth. It is true that sometimes as humans we feel unnoticed, unimportant or as if our work is going nowhere, but those feelings might not be the truth. Imagine how Jesus felt when He was growing up in a simple, ordinary village, doing mundane tasks with wood, knowing that He was able to do much more. Even when He became an adult and people started noticing Him, most still didn’t value Him, and tried to make Him ‘disappear.’ It would have felt very difficult to not try to grab at power and fame impatiently, as Satan tempted Jesus when he was starving in the desert (Matthew 4).

As our Creator, God always notices us, and when we shine His character to the world, everyone else notices too, even if they don’t say so. Deep down, other kids admire kindness more than good looks or physical strength. The mission of love, loyalty, hard work and fighting evil is important and worthwhile. And it’s realistic to not expect recognition or rewards during this lifetime… because the true ‘Top Dog’ is the Lord who gave us all those gifts and joins us together into a strong team, using our differences and unique strengths to make something even better than we can be individually… and we’ll get more pleasure from giving that honor back to Him.

Overall, “Arctic Dogs” is a relatively worthwhile film for children and addresses feelings that many kids struggle with as they develop and react to peer pressures through their schooling years. The film can be a great reminder to not chase fame, especially if it involves doing sinful things to get there. As Christians, we can further extend our young ones’ benefits from this story by affirming to them that God notices, loves and kindly honors them, just the way He made them, even if all they do is be who He made them, as they follow Him. Even if we feel invisible, we’re never invisible to God our Creator, and anyway, He knows exactly what it’s like to really be invisible!

So go out, enjoy the film and have a great conversation afterward, that will encourage your kids and build them up in the Lord. The suitable age bracket for “Arctic Dogs” seems to be approximately 7-15 years, give or take a little depending on each child’s interest and sensitivity to scariness, so it’s nearly one for the whole family!

Positive
Positive—…I just saw the movie “Arctic Dogs,” and I thought it was decent and Godly. A little cliché, but a decent film. There are only one or two moments that I found inappropriate.

1. There are a few gas jokes and at times, they are inappropriate. Not as much as the trailer would have you think, but they are.
2. Swifty strips to his underwear in the last act. It should be noted that he does this to camouflage himself with the snow, and his girlfriend never makes lustful remarks. Still, he probably should have worn white clothes like in the beginning when he’s a child.

I was really expecting this to be a mixed rip off of “Balto” and “Zootopia,” (with the writing quality of “Norm of the North”) but it was actually pretty fun. Swifty learns that being there for others is more important than fame, the evil puffins quit serving their selfish boss, and Jade’s arc gives a good warning about serving someone blindly.
My Ratings: Moral rating: Better than Average / Moviemaking quality: 2½