for language including some sexual references, and brief bloody images. 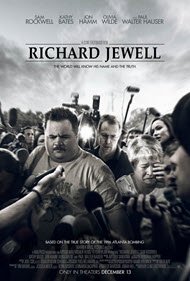 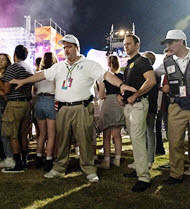 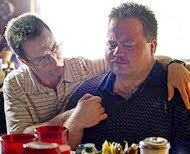 While working as a security guard for AT&T at the Centennial Olympic Park, Richard discovered a backpack filled with three pipe bombs and alerted the Georgia Bureau of Investigation and assisted in evacuation of the area. The bomb exploded, killing Alice Hawthorne and injuring over 100 others. Richard’s alertness and quick help saved many other people from injury or death. 3 days later he was falsely accused of planting the bomb himself.

What happens to people’s lives when what is reported in the news AS FACT obscures the real truth?

Being unfairly vilified by the press and public alike

Fighting the combined powers of U.S. Government and the press

Innocently trusting people who are trying to manipulate and destroy you

Being used as a scapegoat 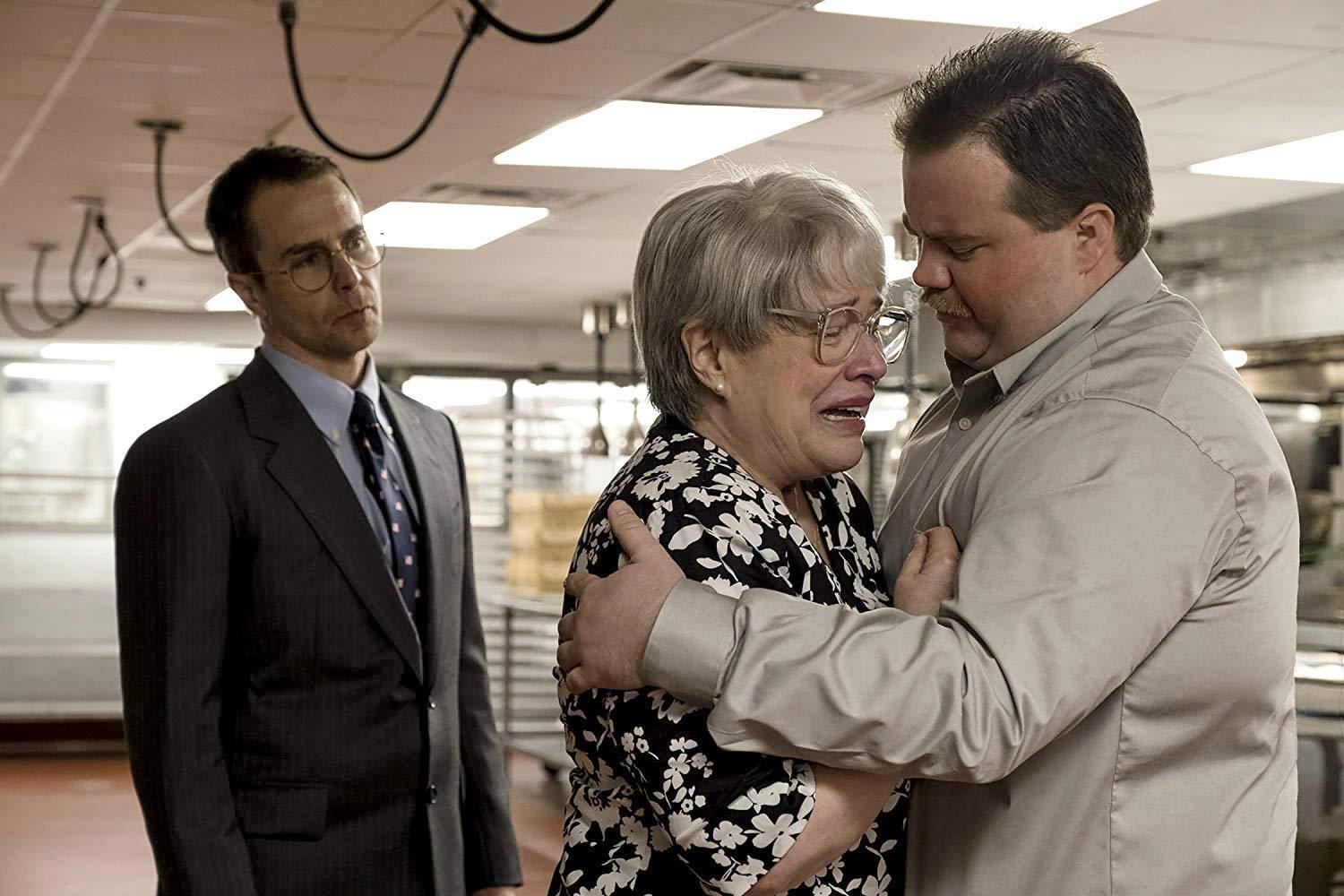 Richard Jewell has devoted his entire being to law enforcement. Richard cannot imagine any other career worth pursuing, no higher calling. However, Richard has had some difficulty holding law enforcement positions: whether as a police office or in his recent position as a security guard at the local college in Atlanta. Why? Well, for many, it is because of Richard’s consistent overreacting to even the most minute of situations and acting in capacities that are NOT within his position (e.g., giving a student a speeding ticket on campus in his capacity as a security guard).

Fast forward to July 1996. The Olympics have arrived in Atlanta, Georgia at the glorious Centennial Park. Athletes, spectators and performers from around the world have gathered together to celebrate the momentous event. And who just happens to be working security for the event? Yep, Richard Jewell. While celebrating the first night of the Olympics at the park, Richard thinks he spies a suspicious bag being carried by a man. Once confronted though, the bag is just filled with beer. No harm, no foul.

However, during the second night of the Olympics, after resolving an issue regarding teenage-drinking, Richard discovers yet another suspicious bag… under a bench… in front of the media tower. Richard doesn’t panic. “I have to call this in,” Richard says to himself. After Richard reports the bag, and the local police discover the bag is, indeed, a bomb, Richard and the police establish a somewhat large perimeter before the bomb detonates.

Sure enough, the bomb detonates. Two spectators are killed in the blast, 100 others are injured. However, the fatalities and injuries would have been FAR worse had Richard not discovered the bomb when he did. And so, Richard, for a time, is dubbed a hero by the media and the police for his quick and heroic actions.

But then some serious questions are asked: How was Richard able to spot the bomb as quick as he did? How is it that Richard knew where to stand to avoid being hit by the blast (he walked away without any injuries)? Is Richard actually the bomber and did all this to make himself some sort of a hero (his history, as others stated, for wanting to get back into the police force, would make him the ideal suspect).

Soon, the FBI makes Richard their prime, and only, suspect. To make matters worse, the media gets a hold of the fact that the FBI is only focusing on Richard as their suspect. Now Richard’s life goes from “hero” to “public enemy number one.”

“Richard Jewell” addresses the imbalance that can occur when dealing with matters of reputation.

There was a time when men and women would gather information, from both sides of an argument, before rendering a judgment. There was a time when people would actually engage in reasonable discussions, check their information and balance the impact on individual lives before releasing their opinions and information to the masses. But as humans grew desperate for the incessant need for immediate responses to everything, the use of “quick judgments” and “demonizing individuals” became a tool that, unfortunately, many, in both the media and non-media setting, took to quickly.

I say all of this because, at its heart, “Richard Jewell” is a story of libel, slander and quick judgment. It is a reminder of what happens when information is missing and when it is easiest to go with what is most convenient rather than patiently wait for the proven truth to be discovered. Richard Jewell, as many may remember, was a target from the very beginning, yet he was innocent. He saved the lives of perhaps thousands of attendees at Centennial. And yet, instead of having everyone rally around him, some of his friends and co-workers denied him and threw him to the wolves.

The film “Richard Jewell” does an incredible job of reminding its viewers of the dangers of conclusion-jumping, slander and libel through some jaw-dropping performances (particularly those of Kathy Bates, Paul Walter Hauser, John Hamm and Sam Rockwell) and terrific plot and overall pacing (for a film that clocks in at a whopping two hours and ten minutes, it didn’t really feel like it overstayed its welcome).

The real strength of the film, however, can be found, particularly in the third act. Without spoiling the film, there is an incredible, heart-wrenching moment with one of the characters that left me speechless.

While the film, in my opinion, is a cinematic marvel in many areas, there is some content to be aware of before deciding whether or not to see “Richard Jewell.”

Violence/Violent Dialog: Moderately Heavy. A shrapnel bomb is seen detonating at Centennial Park. As a result, we witness people lying on the ground (some bleeding), other attendees are running in a panic (this scene is brief though). In one scene, Richard, as a security guard at the college, is seen pushing a student onto a bed (lightly) in a college dorm. Richard’s lawyer discusses a few times about how people only want to see how Richard is going to “fry” (be executed). Someone threatens to chop a person’s hands off and “shove them back up their a**.” In a dream, a character places their face near a bomb as it explodes (the character wakes up before anything happens). Richard lays out a bunch of hunting weapons (guns, knives, etc.) on his bed when the FBI raid his home.

Sexual Content or Nudity: A female character is seen seducing an FBI agent for information (she touches his thigh, kisses him, flirts with him). It is implied that she has sex with him for information (off-screen) as she tells the agent that they should go off and have sex, though their time will be limited. She also wears form fitting clothing. There are two homosexual references. There is also a brief kiss.

Alcohol: Students are seen drinking alcohol (underage) at the Olympics. This is dealt with by authorities. Richard breaks up students in a dorm who are partying with alcohol. Characters are seen drinking in three other scenes (two of which are at a bar).

Drugs: People are seen smoking cigarettes at an event.

Other: Richard is seen being bullied by those around him. The FBI is shown, in a few scenes, trying to trick Richard Jewell into incriminating himself (one in which he is tricked into thinking he is going to create a recruiting video, but he is actually going to surrender his Miranda Rights and such, and one in which they try to gather a voice sample of him making a statement that was made by the actual bomber). In a pretty, but brief, offensive scene, Kathy is seen mockingly praying to God when she finds out who the bomber is before the rest of the media does.

There are many themes “Richard Jewell” touches upon, but the one that clearly stands out to me is “truth.” In the film, the media, the federal investigators all try to twist whatever information they can find so that it “fits” within their own misguided preconceived “truth”: that Richard Jewell was the bomber.

What is truth? Jesus was once asked this by Pontius Pilate after Jesus told him that “You say correctly that I am a king. For this I have been born, and for this I have come into the world, to testify to the truth. Everyone who is of the truth hears My voice” (John 18:37). To follow Jesus means to abide by His teachings, living in the Light and not falling into the temptation of listening or partaking in gossip, slander or bearing false witness, such as what occurred to Richard Jewell. Here is what Scripture states about Truth and living IN the Truth.

“For I have given them the words that you gave me, and they have received them and have come to know in truth that I came from you; and they have believed that you sent me.” —John 17:8 ESV

“So Jesus said to the Jews who had believed in him, “If you abide in my word, you are truly my disciples, and you will know the truth, and the truth will set you free.” —John 8:31-32 ESV

“And you also were included in Christ when you heard the message of truth, the gospel of your salvation. When you believed, you were marked in him with a seal, the promised Holy Spirit” —Ephesians 1:13

“These are the things that you shall do: Speak the truth to one another; render in your gates judgments that are true and make for peace” —Zechariah 8:16 ESV

“Therefore, having put away falsehood, let each one of you speak the truth with his neighbor, for we are members one of another.” —Ephesians 4:25 ESV

And this is what Scripture states about bearing false witness against friends, families and neighbors:

“You shall not bear a false report; do not join your hand with a wicked man to be a malicious witness. “You shall not follow the masses in doing evil, nor shall you testify in a dispute so as to turn aside after a multitude in order to pervert justice;” —Exodus 23:1-2 ESV

“Do not be a witness against your neighbor without cause,
And do not deceive with your lips.” —Proverbs 24:28 ESV

“Richard Jewell” is an emotional rollercoaster of a film—from start to finish. If you’re like me, you’ll laugh, you’ll be outraged and you may even cry in a couple areas, especially at how poorly Richard was treated. Eastwood does a fine job of simplifying a devastating, yet important piece of our history that reminds us to “think for ourselves and not believe everything we read.”

Amongst this, however, there is a plethora of crude and profane language and some other questionable material that may dissuade viewers from attending “Richard Jewell” (supposedly, Kathy Scruggs’ character was taken completely out of context despite Mr. Eastwood having verified the information from several sources before shooting). If you can put aside the vulgarity and some of the other questionable material, I actually do recommend seeing “Richard Jewell,” as it does serve as a strong reminder to take time to gather your thoughts before being quick to action, especially when one’s reputation is at hand (a side note: while Richard Jewell was given a formal apology, it wasn’t until 10 years after the events had occurred and then he passed away a year later in 2007).

Due to the profanity and vulgarity, viewer discretion is advised.