for strong bloody violence throughout, grisly images, language and some drug use. 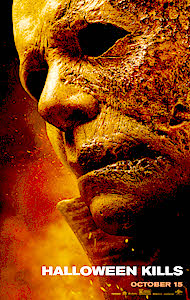 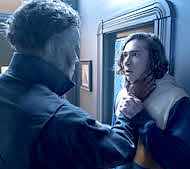 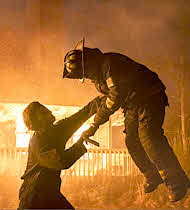 About HUMAN DEPRAVITY and its origin

In 1978 a young Officer Frank Hawkins and his rookie partner of the Hatfield Police Department are called to a home. Knowing full well that Michael Myers is out and about, when they arrive they notice the lights are off and that someone has broken in. They start to look around and unfortunately realize they are not alone. Suddenly, the infamous Michael Myers appears and attacks the rookie officer. Before Officer Hawkins has a chance to think, he instinctively attempts to shoot Michael, but instead accidentally hits and kills his partner. When Michael is caught, Dr Loomis, Michael’s prison psychiatrist asks Officer Hawkins if “Michael killed again.” Well…

Fast forward to 2018. Several things have happened in the interim. For one, Laurie Strode (Jamie Lee Curtis) and her family have escaped her burning house, after successfully trapping Michael in the basement to be burned alive. However, while Laurie is being rushed to the hospital with her family, she is unaware that Michael survived and is on the rampage once more.

Meanwhile, in a nearby bar a man named Tommy Doyle (Anthony Michael Hall), one of the kids Laurie babysat in 1978, tells the story of how he recalls living next door to Michael Myers and that he has set up a fund to help survivors. However, once he and the survivors hear the news report of Laurie’s house being burned and that the firemen who tried to help were slaughtered by Michael, an all out manhunt begins for Michael Myers.

To stay in the spotlight these days, filmmakers feel the need to out-do each other or even themselves. In terms slasher gore movies, like the “Halloween” franchise, it’s, “How can we add more shocking violence?” “How can we be more creative in our murders?” “How much should we raise the body count?”

Early previews by critics warned that “Halloween Kills” was going to be far more gratuitous and horrific than any of the previous Halloween movies. Indeed, they weren’t wrong. Nothing, and I mean NOTHING, will prepare you for what you will witness if you decide to see “Halloween Kills.” There are scenes that made my stomach churn, and I’ve been reviewing for Christian Spotlight for over a decade. From butchering, stabbing, gouging to an on-screen extremely graphic suicide jump from a building window, NO HOLDS ARE BARRED. Even if there was no violence, the vulgar language and the overall macabre tone alone should be enough to make anyone seriously cautious about viewing “Halloween Kills.”

The cast performances are fine. The story contains some throwbacks to Halloween II. But apart from these things, this film lacks any moral substance, any heart, and any empathy. It’s one grotesque murder after another. I found no redeeming morals or themes to draw from this film.

VIOLENCE: Extreme. Please be aware that this section contains descriptions of graphic and horrific violence. Reader discretion is strongly advised. Please skip it, unless you are actually seriously considering watching this movie.

Viewers witness Michael brutally and graphically skewering into the chest and deep buzzsawing through 3 firemen, though we hear he killed 11, and viewers are later shown their corpses—one with his face burned through. A teenager’s bloody head is impaled by a pole. There are numerous very bloody murders with gory injuries, heads decapitated, dismemberment with details shown, bones broken, disembowelment, slashing, deep stabbings, killing with an firefighting ax, stabbing a person in the eyes, throat wounded person gasping for air, shotguns, machine guns, many shootings—including directly in the eyes, eyes gouged out, choking, car crash, vicious mob violence and chaos, and repeated heavy blows with various weapons—including violent head bashing with brains prevalent. A boy apparently bites a razor blade hidden in Halloween candy, and viewers are shown the bloody vomiting results. There is also graphic surgery.

There is a graphic fall from a great height with the camera featuring the gory splattering impact (viscera, detached limbs, and blood pool). Someone has their head stomped on followed by their hand. Some of Michael’s horrifying murders are shown in lingering slow motion. A older man’s head is brutally bashed into shards of glass, and his wife—stabbed in the neck with a long fluorescent light tube—is subjected to the psychological torture of watching the murderer riddle her husband’s body with multiple kitchen knives while she is watching and slowly bleeding out. The film’s climax involves Michael killing a large mob one by one in increasingly brutal ways.

After the viewing tonight I walked out and remarked, “That was all in POOR taste.” The teens next to me reacted like I lost my mind. I don’t think I have. If anything, I think the problem is our world has gotten so used to “soft-core” (smaller amounts) violence that it constantly needs more and more to please their tastes. This brings us the hard-core violence that is “Halloween Kills.”

Like Michael Myers himself, “Halloween Kills” is a stain on all that is good in this world. Pure evil is on display here, just like in the previous film. I didn’t think it could get any more graphic than it did in the first film. I was wrong. And with that, I plead with every Christian and viewer to stay far away from this detestable film. This film will grieve the Holy Spirit. Cling to what is right, what is good, what is just and…