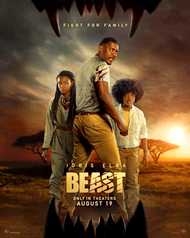 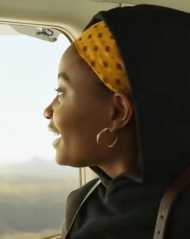 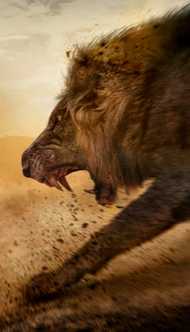 LIONS in the Bible 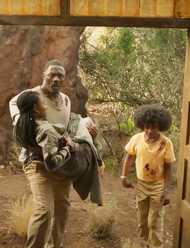 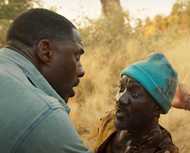 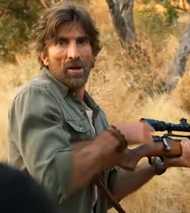 Dr. Nate Daniels (Idris Elba) would like nothing more than to forget the past few years. The best way he can is by spending time with his daughters, Meredith and Norah. After losing his ex-wife to a long and difficult battle with cancer, Nate figures he can reconnect with his daughters by taking them to visit their mother’s hometown, Monapi, in South Africa.

On their first day in Monapi, Nate’s dear friend Martin (Sharlto Copley), who’s the manager of the Monapi Game Reserve, takes Nate and his daughters on a private tour of some of the more restricted areas of the reserve. Nate and the girls have a blast, coming across a pride of lions along the way. While safely at a distance from the pride, Martin explains to the girls, “The lionesses primary job is to hunt while the male’s role is to protect the pride from anyone or anything that tries to threaten them.” Good information to keep in the back of the mind, perhaps.

While on their way back, they come across a town that’s been deserted… or has it? Martin and Nate look around the various buildings and discover dozens of lifeless bodies mauled by some kind of creature. “Who or what kind of creature could have done such a heinous act?”

Martin, Nate and the girls quickly return to the jeep and try to hurry back to the reserve, when all of a sudden a villager from the town they just visited jumps in front of the jeep. Having barely survived the attack the only word he can get out to Martin is “devil.” “Devil?” everyone wonders.

Ever since the first survival film came out back in the early 1930s (yes, it really goes back that far; I actually did the research), many survival films have followed a somewhat predictable format: we start out with the average “Joes” (or characters, with somewhat complicated backstories) who are going off somewhere dangerous and they have to work together (or not) to survive and usually one or more of the characters doesn’t make it, but everything works in the end for some of the characters. The number of survival films that have followed this formula is endless, with only a handful having broken away. The problem is that many of these survival films take so much time focusing on the survival aspect they forget to make sure the audience learns to CARE about the characters and their survival (ironic isn’t it?).

Thankfully, “Beast” is in the minority. It takes the time to develop characters we actually care about. It does so in two ways: first, it ensures that there are very few characters to focus on (too many survival films have a plethora of characters that have backstories that intertwine or have thinly-made backstories that have no-real importance to the arc of the story). Second, the film takes a few “breaths” in between the action sequences to allow the audience to see the relationships between characters (such as Nate and his daughters or Martin and Nate). Speaking of action…

I knew going into “Beast” that the violence was going to be a major issue. However, I think the most pressing concern for me is the realism of not only the violence itself but the movie as a whole. *MINOR SPOILERS* Now, am I saying that a lion in real life would go out, commit revenge and attack entire villages just because his pride was hunted down by poachers? *END SPOILER* No, that’s not realistic. However, lions HAVE attacked people in real life and watching the violence play out here on screen is beyond frightening, brutal and graphic.

LIONS— What does the Bible say about them?

Thankfully, the film’s plot is simple enough to follow. As a reviewer from Plugged In stated, with a film like “Beast,” viewers are probably not looking for anything overly complicated, just a film to thrill and excite, and occasionally scare, and this film’s plot and pacing accomplish this easily. Additionally, the performances are relatively, and evenly, strong from all those involved.

VIOLENCE, BLOOD and GORE: Very Heavy to Extreme. I’m not going to list every instance as it’s not appropriate for this site. However, in the beginning we witness poachers shooting a family of lions and see the dead lions later. A surviving lion kills the poachers one by one (offscreen). There are several scenes where we see the Lone Lion (let’s call him that) attacking characters and cutting and injuring, or killing them with his claws (we can see the aftereffects on the characters, as the characters are usually bloodied). In one truly horrific and disgusting scene, however, we come upon a village and a hut full of dead men and women that the Lone Lion killed (they are severely cut open, internal organs showing and bleeding and flies are all around them) (we get brief glimpses of the corpses). There are scenes where we see the “aftermath” from the Lone Lion (dead corpses such as poachers, another villager, etc.). Children are attacked by the Lone Lion while they are in a car and one is injured. A character dies in a car fire. There is an incredibly graphic fight between a man and the Lone Lion resulting in severe injuries. Gunshots are fired in two scenes

SEX OR NUDITY: None

ALCOHOL: Characters are seen drinking at someone’s house and they become drunk (one even talks about waking up with a hangover).

OTHER: Someone performs open surgery in a jeep. They perform some first aid on someone and have to sterilize the area (the patient screams during the sterilization). There are some jump scares throughout the film. Meredith says some pretty incredible hurtful and disrespectful things to her father in a few scenes. A bloody civilian stops the jeep to try and talk to Martin. We see some machetes in someone’s house. A lioness has a bloody paw.

At one point, Nate, when he has a moment of peace, tries to speak to Meredith about how sorry he is and that he should have tried harder to make things better with their mom, especially before she died.

No one knows how much time we are given on Earth. Sure, if we are presented with terminal illness doctors can do their very best to give time frames, but they are NOT God. Our time on Earth is limited and only God knows the exact day and time we have left. The Apostle James (brother of Jesus) says,

“…yet you do not know what tomorrow will bring. What is your life? For you are a mist that appears for a little time and then vanishes. —James 4:14

So take every moment you can to serve the Father and His Son, Jesus, fully. Not a single second of your life is guaranteed.

To best sum up “Beast,” I am reminded that “less is more.” I say this in reference to the violence and the abhorrent, stomach-churning nature of the scenes that occur on screen (particularly the one at the end of the film). As a Christian and as your reviewer, I advise you to please refrain from attending this film and advise other Christians to do the same. It is also far from appropriate for children. If you do feel inclined to see this film, however, I warn you not to eat anything while watching. You’ve been warned.

Positive
Positive—“Beast” reminded me of a cross between “The Ghost” and “The Darkness” and “Jaws.” Idris Elba, as a widowed father, and Sharlto Copley, as the uncle, did a great job. Iyana Halley and Leah Sava Jeffries were outstanding as teenage daughters torn with grief while trying to connect with their father on a trip to South Africa. Together while out in the bush they all try to survive and escape an aggressive rogue lion. The natural beauty of the film location and the isolated wilderness adds to the intense action. Brutal attacks and realistic bloody injuries emphasize the danger they face. Characters risk their lives to try to help others.

Scriptures that came to mind: Colossians 3:20, Ephesians 6:1 and 6:4, 1 Peter 5:8.
My Ratings: Moral rating: Average / Moviemaking quality: 4½
Tori, age 50+ (USA)
Neutral
Neutral—I had really looked forward to this movie. I like scary movies, but not horror movies, and this one was to fit the bill. Was a little concerned when I first discovered it had an R-rating, but after reading here on Christian Spotlight it was Sex/Nudity free we decided to go. We went with one of our adult sons and dil. I was massively disappointed!

Not only flawed in so many ways but the acting was subpar. Even On a tiny detail the kids complain dramatically how hot it is, but continue to sport around in winter gear. Another thing so obvious of a flaw, even to set the table for a scene, was they were supposedly so terrified when reaching the poachers hide outs,but yet opened ALL doors and never shut them! This could have been a spectacular film but fell so very short on many avenues. Truly sad! I would recommend going to see it as it's still entertaining, but more of TV streaming worthiness. Still not sure why it garnered an ‘R’!
My Ratings: Moral rating: Average / Moviemaking quality: 3
Carolina, age 49 (USA)