for rude/suggestive material and language.

Check back later for review coming from contributor David Cook 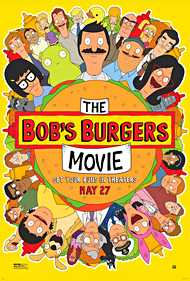 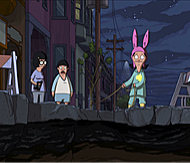 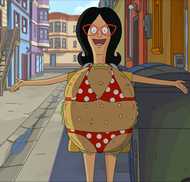 Adult animation based on a quirky comedy TV series 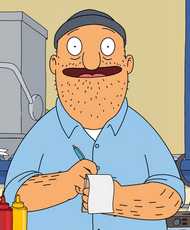 I was hooked on the Bob’s Burgers TV series when, in the pilot episode, Bob Belcher gathers his wife and kids for a family meeting and honestly states, “You’re my family, and I love you, but you’re all… terrible… at what you do.” It was so contrary to my expectations that I couldn’t resist giving the new show a chance.

Twelve seasons later, the series has followed a similar path as “The Simpsons.” It began with intimate stories about this singular family, but it has gradually introduced a plethora of new characters—and eventually an entire community of unique and colorful storylines.

Where “Bob’s Burgers” separates itself from other adult animations like “Family Guy,” “King of the Hill,” or the aforementioned “The Simpsons,” this series—somewhere around season 3—seems to have intentionally made an attempt to become a show more acceptable to families. It shed some of the adult humor from early seasons and replaced it with more family-friendly scenarios, and somehow it avoided politics altogether (which is a borderline miracle). Don’t get me wrong, “Bob’s Burgers” still delights in its potty humor, periodically includes jokes that only adults will understand, and sometimes sneaks woke ideology into episodes. Despite that, it still focuses on a family that truly cares for each other, which differs from most current programming.

I feel that “Bob’s Burgers” hit its sweet spot from seasons 3-9. The last couple of seasons have been a bit disappointing, so when they announced “The Bob’s Burgers Movie,” I immediately felt uneasy. I worried that the creators of the show would stray from their silly-yet-sweet family stories and intensify everything for the big screen.

Bob Belcher (H. Jon Benjamin—“Archer,” “Wet Hot American Summer”) is the proprietor of Bob’s Burgers—a struggling restaurant in a beach town somewhere in the northeast. His wife Linda (John Roberts—“Gravity Falls”) helps him run the business while trying to raise their three kids—Tina, Gene, and Louise. When Bob is notified that they have only one week to catch up on their business loan, things get even worse. A sinkhole collapses directly in front of their restaurant. With no way to make money, their best customer (and self-proclaimed best friend of Bob), Teddy (Larry Murphy) tries to help Bob and Linda creatively pay their debt. Meanwhile, their three curious kids discover a skeleton in the sinkhole. They assume it must have been murder, so together—Tina, Gene, and Louise seek to discover the truth of what happened, and that truth may impact the entire town.

The Bob’s Burger Movie sets out to be a cute treat for adults, teens and preteens. Fans of the TV series may be delighted by the time focused on key character traits such as: Bob’s artistry as a cook, Tina’s adolescent confusion, and even the origin of Louise’s trademark bunny ears. Viewers are also introduced to the geography of their community with sweeping 3D shots showing the stores and landmarks with which viewers have become familiar. Included are multiple songs designed to entertain and further the plot. Eacg member of the Belcher family overcomes their individual struggles and grows closer as a family.

For people unfamiliar with the TV show, a cute duet at the beginning of the film from Bob and Linda will introduce them to all the necessary details and set the tone for the story about to unfold. Very quickly, newcomers will understand Bob and Linda’s constant struggle to keep the restaurant afloat, Tina’s teenage angst, Gene’s pursuit of creativity, and Louise’s insecurities that she tries so hard to hide.

The soul of this film is certainly the Belchers’ family dynamic. Despite their differences, their love for one another is undeniable. There is no evidence that the Belchers are Christ followers, but the characters still possess certain characteristics encouraged in the Scriptures.

Bob is patient through the constant chaos in his life, but above all, he is a very hard worker. As Christians, this is commanded of us in Colossians 3:23 “Whatever you do, work at it with all your heart, as working for the Lord, not for human masters,” and in 1 Corinthians 10:31 “So whether you eat or drink or whatever you do, do it all for the glory of God.”

Linda is a constant source of positivity, even when the world is collapsing around her. Again, this is a Christian trait that Paul encouraged in Philippians 2:14-16,

“Do everything without grumbling or arguing, so that you may become blameless and pure, children of God without fault in a warped and crooked generation. Then you will shine among them like stars in the sky as you hold firmly to the word of life.”

The three kids are rascals, but they are possibly the most loving siblings on television today. This is refreshing, and it is another command for Christian families and beyond in Hebrews 13:1-3.

“Keep on loving one another as brothers and sisters. Do not forget to show hospitality to strangers, for by so doing some people have shown hospitality to angels without knowing it. Continue to remember those in prison as if you were together with them in prison, and those who are mistreated as if you yourselves were suffering.”

Though the overall message of “The Bob’s Burgers Movie” is positive and supports family values, it still comes from a secular perspective. As a result, the film has some material that will be objectionable to certain audiences. The main characters are often frazzled and frequently take the Lord’s name in vain by saying, “Oh my God” (13) or “Oh God” (11). There are multiple vulgar terms like “My penis area,” “Grab your meat,” “You gotta punch 'em in the nuts,” “a**,” “Get your head out of your boobs,” “fart,” “d*mn,” “cr*p,” “cr*ppy,” “h*ll,” “Son of a butt,” and “Jeez.”

There is some mild sexual content. The eldest daughter Tina is in her early teenage years, and she is struggling with puberty and her new attraction to boys, specifically her classmate Jimmy Jr. She is very attracted to his butt and imagines him in his underpants a couple times. She also imagines “sexy” zombies, which is a reference to earlier episodes. Linda wears a burger costume, puts a bikini over it, and a character says, “Sex sells, baby!” And, there is a statue that opens a secret door when the nipples are turned.

Since there is a murder mystery aspect of the plot, there are also a couple scenes that may be scary to young audience members: a skeleton falls on Louise and some characters get trapped underground and fear they will run out of oxygen.

I think “The Bob’s Burgers Movie” is an worthy addition to the series. Diehard fans will be entertained by the countless Easter eggs throughout this film, but I imagine some will be disappointed that many of the supporting town’s characters are not featured. For anyone considering watching the TV series, beware that it definitely includes questionable material—even more so than this movie adaptation.

I, personally, relate more to Bob Belcher than I like to admit, and I’m glad they made this film. I’m especially glad that they didn’t push boundaries and kept the film firmly in the PG-13 rating. The TV series was starting to lag, but “The Bob’s Burgers Movie” has rekindled my love for the Belchers… even though they’re all… terrible… at what they do.