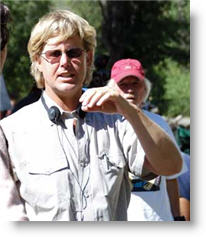 Michael Landon Jr. on the set of “The Last Sin Eater” 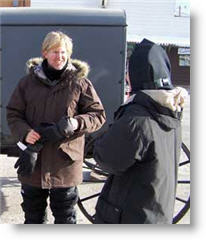 Michael on the set of “Saving Sarah Cain”

Michael Landon Jr. is no stranger to the world of movie-making. The TV series (“Bonanza”, “Little House on the Prairie”) that his father, Michael Landon played in, made a lasting impression on Michael Jr. and strongly influenced the genre of films that he prefers. Now in his early forties, Michael is dreaming bigger and directing family-friendly films that really sell. Last year, he formed Believe Pictures with close friend Brian Bird, a writer and producer for “Touched by an Angel”. The partnership has resulted in “The Last Sin Eater” a very successful film adaptation of the book by Francine Rivers’ as well as “Saving Sarah Cain” which was based on Beverly Lewis’ novel and aired on Lifetime. Michael’s version of “The Velveteen Rabbit”, filmed as 70 percent live action and 30 percent animation, is tentatively scheduled for a Christmas 2007 release. Michael spoke with ChristianSpotlight™ about his faith, his films and his upcoming projects.

Spotlight: What inspired you to make “The Velveteen Rabbit?”

Michael Landon Jr.: “It’s a great, great classic story with the theme: Love makes us real. I’ve always loved the Marjorie Williams version and the classic versions and animated shorts, but those were all from the rabbit’s perspective. I wanted to do it through the little boy’s point of view. So the story is from Toby’s perspective.”

Spotlight: And you also have “Loves Unfolding Dream” coming up…

Michael: “Yes, we do. I want to say November. It’s hopefully something audiences will continue to enjoy… I’ve stepped back a bit in the last two “Love Comes Softly” films. I’m not directing. I did have my hand in the screen play for ‘Loves Unfolding Dream’.” 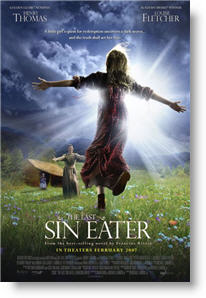 Spotlight: How is “The Last Sin Eater” performing?

Michael: “It’s doing well, picking up through word of mouth mostly. It’s not a deterrent when people see it. [Laughs] In polling, it scored A’s across the board for gender and age groups.”

Spotlight: You’ve done a number of book-to-film features in recent years. What do you look for in a book that you consider adapting for screen?

Michael: “I look for theme of film, characters’ arc, a main protagonist, hidden messages in it—I guess it’s a spiritual side, how it speaks to my heart. Also, really strong plot twists, where you think you’re headed in one direction, but you’re not—that have that element of surprise.” 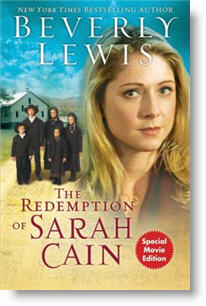 Spotlight: Your most recent film was an adaptation of Beverly Lewis’ novel “The Redemption of Sarah Cain,” about a young city woman and her Amish nieces and nephews. What can families learn from the Amish characters in “Saving Sarah Cain?”

Michael: “There is a fascination with Amish culture. Beverly Lewis has pointed that out—she’s sold a lot of books! And there are other authors too, who write about that genre, Wanda Brunstetter, and others. The Harrison Ford film “Witness” was extremely powerful. It’s amazing that these people are somehow able to stop the clock and preserve innocence from a lifestyle that we are caught up in. We are definitely a culture of distractions. They’re not using any of these advances. I have met with some wonderful Amish people; there is an innocence preserved in their children because they haven’t been exposed to certain things—like entertainment.”

Spotlight: What would you say characterizes a Michael Landon Jr. film?

Michael: [Laughs] “Hopefully, evokes some sort of pathos, some sort of good cry. It touches, and has heart, and is moving to people. It usually has a spiritual theme.”

Spotlight: Is there any feedback you’ve received from viewers that brought home the impact of one of your films?

Michael: “We’ve had a lot of nice things said to us about lives that were changed. For example, with “The Last Sin Eater” the main group impacted by the film is teens and we weren’t really expecting that. Churches used it to show to their youth groups… The film prompts discussion of big issues like guilt and redemption, and that film really hit a core.”

Spotlight: What is your approach to the spiritual side of these films?

Michael: “With storytellers, I like to think about it like the parables Christ tells. If Christ came right out and said what his point was, it takes away from the parable.”

Spotlight: With so many people in the entertainment industry claiming religious affiliation. Do you ever feel like you have to prove your faith to members of the Christian media or community at large?

Michael: “I can’t say that I go out of my way to prove that I’m genuine. I started pursuing this way before “The Passion of the Christ,” before there was a market for these types of films. I started working on the “Love Comes Softly” film in the 1990s. I took ten years to get that done because everybody thought it was too soft. But you know, I’ve always been somewhat outspoken in my faith. Each film has something of a soul, and I think people can smell a fake.”