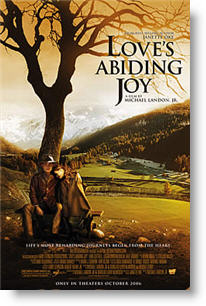 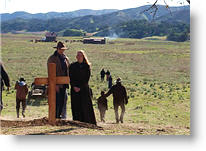 Death and the Bible

This is the fourth installment of Janette Oke’s Love Comes Softly series. The previous three films (“Love Comes Softly,” “Love's Enduring Promise” and “Love’s Long Journey”) were television releases by the Hallmark Channel and are available on VHS and DVD. “Love’s Abiding Joy” follows Missie (Erin Cottrell) and Willie (Logan Bartholomew) Lahaye and their struggles with the difficulties life has for them as they try to establish themselves as ranchers during a drought and as a family in the midst of death.

First of all, I have to say that because of the typical theater-released movies, I rarely ever go to the theater, even though I really do enjoy it. So I was glad that this movie was released in a theater for that very reason: It gave me a good excuse to go to the theater. That being said, and that the other three were made for television, there was nothing in this film that was better than any of the others, and it still has that “made-for-tv” look and feel to it. Still, even though I feel the first two movies were the best, I enjoyed this one as well as I did “Love’s Long Journey.” It is a little slow-moving and on the melancholy side, so it is not what you want to see if you need to be cheered up, but it has a lot to offer in teaching Christian principles and portraying real people dealing with life.

I really liked how it portrayed Missie Lahaye struggling in her faith. As a young inexperienced woman, forced to deal with the sudden death of her daughter, she isolates herself from her family, society and from God. We watch as she slowly learns to get through this period of anger, guilt and loss, to let her father, husband and God help her cope and move forward.

I think it is so important as Christians to understand that it is fine for us to be angry, even with God. He loves us so much, and He knows that we are not perfect, and we cannot understand or always be strong in trials, that is why we have Him. If we are just honest with Him and with ourselves, I believe He will help us to go through the emotions—which is better than holding them in and letting them fester. My favorite scriptures in dealing with difficult times are always The Psalms, David pours out his heart and feelings—following it with God’s love, compassion and care. In Psalm 4, he begins by saying “…Give me relief from my distress…” and ends it by saying “…I will lie down and sleep in peace, for you alone, O Lord, make me dwell in safety” (NIV).

Missie’s father (Dale Midkiff), while also grieved by their loss, is older and stronger in his faith and shows us a great example of a mature Christian. He has already gone through hardships, is steadfast and determined to help his daughter through this time, not letting her rejection dissuade him. The timing of his visit was not a coincidence either.

While Missie is grieving at home, her husband has to find another job to support his family. He is pressed into the position of Sheriff, working under Judge Sam Dorose, who has gained his wealth by taking advantage of less fortunate people who are suffering from the drought, forcing Willie to go against his friends and neighbors. To further complicate matters, the daughter of Judge Dorose becomes attached to the adopted son of Missie and Willie Lahaye, and when Judge Dorose finds out, he does what he can to cause further trouble for the Lahaye family.

Overall, this is a good movie. The acting is decent, the film quality is decent, there is no foul language of any kind, and dress is completely modest. There is one short scene of the teenagers kissing, however, it is not very graphic or sensual. There is no real violence; however, there are guns, as with any western. This filmis appropriate for the entire family.

As an added bonus, the “Love’s Abiding Joy” Web site by FoxFaith has downloads that include a discussion page and movie clips. While these are intended for Sunday school or church groups, your family could use them at home as well. The material contains lessons that coincide with elements from the film, as well as corresponding scriptures to read. (See: foxfaithmovies.com/lovesabidingjoy)

See review of the sequel to this film: Love’s Undending Legacy

Positive—I just finish watching “Love’s Abiding Joy” and “Love’s Long Journey,” and I totally enjoyed them. Since I guard what I watch as a rule, I really loved these movies. There is rarely anything on TV that is worth my time. I am definitely going to buy the movies and the books. Anything that comes out that is this decent, is a rarity. I do not go to movies anymore, and I hate going into video stores because of what is rented there. They are decent family movies for all ages. It makes for a good Bible study, watch them and discuss the material. It teaches faith, love, about death, anger and so forth. These are issues that we ALL deal with at one time or another. I know that I have three times over and more are coming. As christians we need to show Christ to this lost and dying world.
My Ratings: Excellent! / 4½

Ruth, age 21
Neutral—I waited to buy “Love’s Abiding Joy” before seeing it. I have to say that my husband and I loved the last three movies in the series, but were very disappointed with this one. We both felt it had an eerie feeling to it. Also, the word “h—l” is used once in the movie. Although that is not the worst word, we do try to stay away from cussing of any form even mild and were very disappointed.
My Ratings: Better than Average / 3

Dawn, age 27
Neutral—I have followed all of the movies in this series. I read the books by Janette Oke as a child and again this past year. Though none of the movies follow that closely to the books, there was nothing in this movie that followed the book! The book is so good, I’d love to know why the writers felt the need to create a whole new story. While the movie was good, it wasn’t at all the book, so don’t be expecting that! Overall, I was dissappointed and am confused as to where the next movies will go from where they left off.
My Ratings: Excellent! / 3

Karen, age 24
Comments from young people
Positive—Watching this movie was a great way to spend some quality time with my friend. “Love’s Abiding Joy” (LAJ) was a wonderfully done movie, but just a little boring. …a worthwhile film that had just the right amount of everything. …overall a great family film that I will buy and treasure forever.
My Ratings: Good / 3

Lauren, age 16
Positive—I thought this was a great family movie. There was nothing at all that was bad. It went great with the other three Love’s Abiding Joy movies. I was glad they kept most of the same actors. It had a touching and inspiring story.
My Ratings: Excellent! / 5

Mycah, age 13
Positive—This was a great movie! It shows how it is hard when tragedy strikes God is still with you. Good values, great acting, just all around a great family movie!!
My Ratings: Excellent! / 5