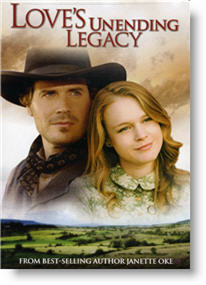 The “Love Comes Softly” series has hit entry number five and the novelty is still wearing thin, for me. This installment finds Missie (Erin Cottrell) three years later: being a single mother after her husband Willie was shot during a poker scuffle. She and Maddy move back in with her parents Clark and Marty (Dale Midkiff and Samantha Smith, taking Katherine Heigl’s place). She finds a new home, and finds a new teaching position that she settles right into, but Missie has lost all faith in herself, until a chance encounter at her father’s church where she adopts homeless orphan Belinda Marshall (Holliston Coleman).

Missie didn’t want to adopt another child into the family, as she is already taking care of Maddie (Brett Coker), but decides to welcome her in with open arms.

Missie also finds interest in Zack Tyler (Victor Browne), the town’s Sheriff. There are subplots and incidents that mirror Missie’s tragic losses, and through the experiences will she ever find a way to bring hope and joy?

I watched this movie when it debuted on the Hallmark Channel a year ago, and looked at the message boards on IMDb. A lot of loyal fans were outraged at the inclusion of Missie’s kids Jeff and Abel, as they are nowhere to be found, but they were even more furious at how Missie’s husband was written off, and how the storyline in the fifth novel is different than the movie’s synopsis. There are a few deaths: Willie’s death is shown, but not his face, and Clark kills a horse (despite the objection of Belinda; nothing is shot as the editing switches from Clark holding a shotgun to Belinda’s expression on her face, but the gunshot can still be heard in the film’s sound track).

Missie does maintain a strong sense of God’s involvement and how they measure up to the lives of others.

Michael Landon Jr. directed the first four installments in the series, and has passed the reigns to Mark Griffiths (although Landon serves as executive producer for the next two films). Both Griffiths and Landon bring the series to an all-time low. As much as there is strength in the movie, there is also weakness; the movie runs on the level of a regular soap opera television series. Some Christians may find redeeming values in the movie, such as the decent storyline, but all the plot holes and the sappy dialogue isn’t enough to save the movie itself.

This film is followed by a sixth movie that aired on Hallmark Channel, and will be out on DVD on May 9, which I’ve seen and will submit my review when the time approaches.

See review of the prequel to this film: Love’s Abiding Joy

Positive
Positive—Awesome, clean, very family friendly which says a lot for today’s movies. So what that some of the acting could have been better, I would rather have it that way than to have trash. Great Movie Must add to your collection. Good job Michael Landon, Jr. For keeping Family Values!
My Ratings: Moral rating: Excellent! / Moviemaking quality: 4½

Melissa Poole, age 34
Positive—This was a feel-good movie, my daughter and I enjoyed. It taught valuable lessons about patience, opening you heart to others and realizing that things happen in life one may have no control over. Trusting in God was a strong undercurrent in this film as well. Although I wouldn’t rate it as a “must see” film, it was a worthwhile way to spend a couple of hours and one the whole family could watch.
My Ratings: Moral rating: Good / Moviemaking quality: 2½

Angie, age 48
Neutral
Neutral—I have seen all of the movies in this series so far. I appeciate that Michael Landon Jr. is making these movies. The moral content is excellent and definitely family friendly. The quality of this movie is not as good as the films preceeding it. The movie making seems choppy, and the story kind of flung together. Still, the movie is clean and represents high values, courage, and good examples to young people, though I think young people would find this one boring.
My Ratings: Moral rating: Excellent! / Moviemaking quality: 2½

Maggie Hays, age 60
Comments from young people
Neutral—I never really liked any of the movies from this series. I still stick to my opinion that the first movie (“Love Comes Softly”) is the best of the series. This film probably takes second place. There is obviously nothing offensive content except for Belinda’s bratty attitude at the beginning. This movie had good messages, it was just a boring movie.
My Ratings: Moral rating: Good / Moviemaking quality: 4

Joseph Hughey, age 14
Positive—When my family bought it, we loved it! It is a fantastic video! I thought Missie LaHay (Erin Cottrell) was a very good actress! I think it is a very good video to see! It has no bad language. I would prefer it for anyone! But it is a fantastic video, with some very good characters. It is probably my favorite one out of the whole series!
My Ratings: Moral rating: Good / Moviemaking quality: 4½