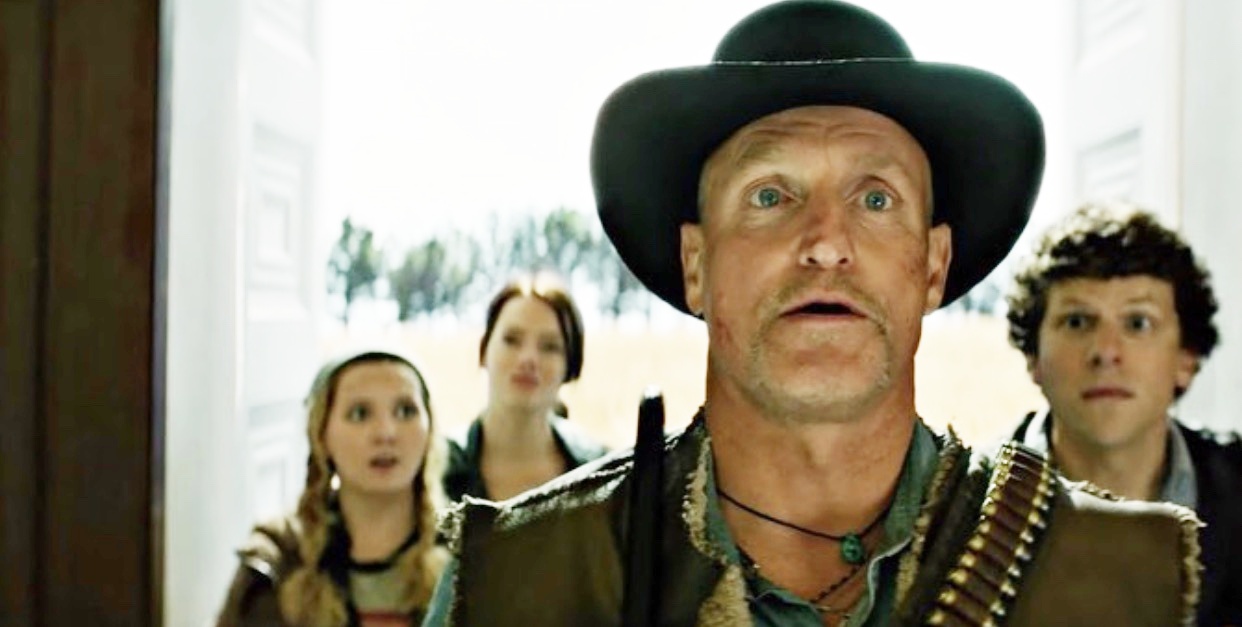 for bloody violence, language throughout, some drug and sexual content. 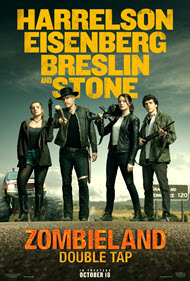 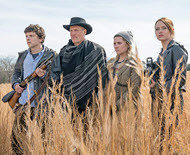 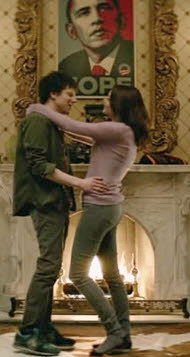 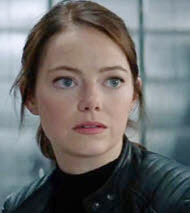 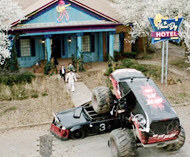 For those of you unfamiliar with the situation, in the first “Zombieland” film an unknown virus made its way around infecting others, out of nowhere, turning people into flesh-eating zombies. The first and second films focus on a small group of survivors: Columbus (Jesse Eisenberg), Tallahassee (Woody Harrelson), Wichita (Emma Stone) and Little Rock (Abigail Breslin). It’s been ten years since these survivors found each other in their travels and decided to stick together, like a family, while trying to survive zombies.

Over the years, things have changed. The zombies have gotten smarter and have adapted more to their surroundings. Some zombies have even become more genetically enhanced (no explanation of how that’s possible), with some almost being dubbed “super-zombies” or like T-800s (from the “Terminator 2” film), with invulnerability—even after a “double tap” (a double tap is shooting a zombie a second time to ensure it is undoubtedly dead). But zombies aren’t the only thing on everyone’s mind.

Little Rock (Abigail Breslin) has aged quite a bit; she’s practically an adult now. She’s tired of being babied and being called a “little girl” by Tallahassee and everyone else. She wants to explore and spend time with adults her own age. As such, Little Rock decides to leave the nest, unbeknownst to the rest of the crew, with a college student from Berkley (or what use to be Berkley) to wherever the road takes them.

Columbus, Tallahassee and Wichita fear for Little Rock’s safety (hello, it’s Zombieland! There’s hundreds of thousands of zombies on the lamb!). So they decide to go after her and bring her safely back.

The stakes have never been higher.

I’d be lying if I started off this review by stating that there isn’t some fun to be found in this film. The humor, when appropriate, is gut-busting—especially when it comes to the onscreen chemistry between Tallahassee, Columbus, Wichita and occasionally newcomer Madison (Zoey Deutch). The violence, while graphic at times, is played as a spoof on slasher and zombie films that have come before.

But, once the humor has settled and the characters have stopped slashing zombies for a second, and once you’ve left the theater for good, you may feel guilty about what you found humorous when you should have been appalled—how the violence perhaps barely fazed you during the movie. And then perhaps you ask yourself, like I am right now, “Where is my heart? Would Jesus approve?”

And therein lies the issue with “Zombieland: Double Tap.” Cinematically, it is a step up from the first film. The dialog is stronger, the humor is more intact, and the violence has definitely DOUBLED UP (not in the best ways, either). But when you’ve become so comfortable with the violence and the language that even when large amounts of conversations in the film devoted to making fun of blond females (i.e., the character Madison), pass you by, there’s something wrong. A film should not desensitize, and “Zombieland: Double Tap” certainly does.

VIOLENCE: Extreme. There are numerous scenes, including an extended fight scene, in which zombies are killed in a variety of fashions with a variety of weapons and tactics (some zombies are beheaded, some are plowed over, some have things dropped on them from above, many are shot in the head and chest, some are stabbed, some fall from buildings, one has his head graphically squished). Zombies are seen biting victims in the face and arms. Many of these scenes contain large amounts of blood pouring from the zombies’ mouths and bodies. One of these graphic scenes is presented in slow-motion.

SEX/NUDITY: Heavy— Innuendos, euphemisms and double entendrés, couples kissing in bed and elsewhere, casual attitudes toward fornication, woman straddling and kissing man in bed, saying “We're doing this” (followed by loud sexual sounds), another couple has sex, men quarrel over who gets to use a woman’s “driveway,” references to group sex, comments about Elvis’ hips and a**

DRUGS AND ALCOHOL: Little Rock asks Berkley if he has any weed on him, and he holds up a large bag of marijuana. They later smoke the marijuana and get high. Strong alcohol is also consumed by most of the main characters. One is shown smoking, as well.

Other: When a character refuses to have sex with Madison at first, she asks, “Why? Is it because of Jesus?” Tallahassee, when visiting Graceland refers to Elvis as the King of Kings and that traveling to Graceland is a trip to the Holy Land. There is a road sign that states “Jesus Will Save You” (I believe this was written after the Zombie attacks began, and is an empty claim that is meant to be insulting to believers).

Of course, the whole concept of zombies is dark and silly foolishness—people coming back to life on Earth from a physical death to eat you. In Hebrews 9:27-28, the Bible states,

“Just as people are destined to die once, and after that to face judgment, so Christ was sacrificed once to take away the sins of many; …and he will appear a second time, not to bear sin, but to bring salvation to those who are waiting for him.”

When we die, we face God Almighty’s judgment on our actions and our decision about whether we truly accepted His gracious and undeserved gift of atonement for our sins, giving our lives to Him, or whether we stubbornly rejected Him. We will either live eternally in Heaven with our Savior or be forever separated from Him, living in the bowels of Hell for all eternity, following The Final Judgment.

And I heard a voice from heaven saying, “Write this: Blessed are the dead who die in the Lord from now on. Blessed indeed, says the Spirit, that they may rest from their labors, for their deeds follow them!” —Revelation 14:13

If Tallahassee were a real person, he might say something to the effect of “Zombieland: Double Tap is as good as a yellow, delicious Twinkie.” Then again, perhaps he might look back at this movie, in disgust, and ponder the morbid humor, ultra-violence (squashing heads, flying intestines, decapitation, split skulls, blood and gore, etc.), and his choice of extremely vulgar and profane language.

So in short, “Zombieland: Double Tap,” certainly doesn’t earn a recommendation in my book. Please also be aware that the number of stars definitely does NOT warrant a recommendation (this is based on the moviemaking quality of the film ONLY). It’s far too graphic for children; most definitely leave them at home. You won’t do the Holy Spirit or your own spirit any favors by seeing this film. Skip it, please.

Every time you buy a movie ticket or rent a video you are in effect casting a vote telling Hollywood, “I’ll pay for that. That’s what I want.” What enables Hollywood Liberals to continually attack the Bible in movies and present immoral and even abhorent programming? Money. Christian, are YOU part of the problem? Read our article

Secular Movie Critics
…If you liked “Zombieland,” you’ll probably like “Zombieland: Double Tap,” just not as much. …“Double Tap” isn’t the first time I’ve been let down by a sequel that feels the need to regurgitate the original rather than moving forward into new territory. …[2½]
James Berardinelli, ReelViews
…Gore and guffaws go hand… There’s certainly no paucity of carnage… [3/5]
Neil Smith, GamesRadar+
…It’s just a time-killer we didn’t much need, a decade after we hardly needed the first one. …
Tim Robey, The Telegraph [UK]
…It’s rushed and dusty, a film more belonging on Crackle than the big screen, more expensively budgeted than the first yet mostly creatively bankrupt. …
Benjamin Lee, The Guardian [UK]
…Behind the self-awareness and the irony is merely a hollow emotional core, a lack of anything to say because saying something would require ambition rather than complacent winks and nods…
Steven Scaife, Slant
…Pointless …a repetitive, uninspired, and ultimately braindead sequel. …[C-]
Charles Barfield, The Playlist
…the magic is MIA… there’s not a lot of overwhelming evidence for this movie’s need to exist. …
Bill Goodykoontz, The Arizona Republic