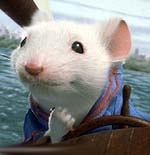 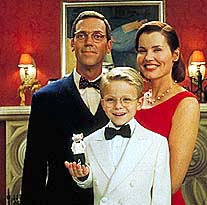 What do you get when you combine the technology of “Babe”, the story of “Annie”, and a couple of chapters from E.B. White’s novel Stuart Little? “Stuart Little”—the movie!

The film version diverts from the book immediately when Stuart is adopted rather than being born into the Little family. All of our children (ages 4, 6, and 10), us parents included, enjoyed watching Stuart try to gain love and acceptance from his “brother” and the family cat, who are both the cause of much heartache and all of the action in the film.

It was wonderful to see Mr. and Mrs. Little happily married and a loving family portrayed so respectfully. The only negative would be one “d--” and other cynical comments by the house cat and his partners in crime. Happily, the cat has a change of heart, and the alley cats get their just reward in the end.

The best thing about this movie is that it has motivated us to dust off our old paperback and sit down together as a family to re-read an old favorite during Christmas break!

regarding adoption… It was a nice movies in most ways. But, it did make me sad. Why? As an adopted person, I’ve seen the reaction in real life that was shown by “Stuart’s” older brother. As a marriage counselor and others who are thinking about adoption, tell them not to adopt if they have children or are planning to have children in the future. While I had a tremendously happy childhood, my adopted parents didn’t have any children of there own. They did raise over 57 welfare children. An adopted child very seldom feels as complete as a “natural born” child in the same family. Did not really have a good experience with this film because of my background. My Ratings: [3/5]

Ray P. Burriss, age 62
“Sad portrayal of adoption”… I like the thought that they adopt outside of their norm but that is the only positive from the adoption world point of view. Particularly when the supposed birth or “real” parents (language that cuts at the heart of almost every adopted parent) come back and say that the Littles could never love him the way “they” do. That simply is not true! We love our adopted daughter as much as we love our biological sons. They are all our children and precious gifts from God! Another sad event is when the “real” parents turn out to be fakes. What terribly confusing messages for an adopted child to see. I am reading the story currently and so far the movie just does not hold up. But then what is new for Hollywood! My Ratings: [2/2]

Becca, age 36
enjoyable… I took my 8 year old daughter and 4 year old son to this movie. We all really enjoyed it! I have taken my kids to see “A Bugs Life,” “Toy Story,” and “Toy Story 2.” We decided that “Stuart Little” was the best by far. You just don’t see stories like this anymore. Movies where both parents are together and have a stable family. Movies where the worst part is being chased by a cat. My Ratings: [4½/4½]

Carol Erickson, age 33
upsetting… This film COULD have been an entertaining film, but we could not help but leave feeling upset. Why do moviemakers insist on gratuitous language in films today. There was no need for any of the language from the cats and no need for the innuendos. I can’t believe that we can look past that to feel good about the movie. That to me is very offensive, to target a movie towards children and then fill it up with trash. My Ratings: [2/4]

Brad Denton, age 28
who is the target audience?… Although the movie itself was quite nice, I had trouble seeing what age group it fit into. “Stuart Little” was rated PG because of several instances of light profanity. This could have been a rated G film if there was none at all, and it could have easily been designated as a film suitable for children ranging from age 5 to 12 (including those young at heart of course!). I think the world’s perception of acceptable language in children’s/family films has been dulled to the point at which they are assuming that children have heard and are used to that kind of language. Unfortunately, they’ve jumped to conclusions. Excluding those things, technically, it was impressive, and it was overall a good family film. I recommend it, but personally, it didn’t quite click with me. Being an avid E.B. White fan, I think they did a fair job of adapting the book to film. My Ratings: [4/4½]

Aaron O., age 14
foul language and gross innuendos… Though the general content was cute and entertaining, the foul language and gross innuendos related to passing gas and a cat licking itself were way out of line and completely unnecessary. …I could not, in good conscience, recommend it to anyone. As the movie is being heavily marketed specifically to the very young, I find this movie very offensive. My Ratings: [1½/2]

Pat Branine, age 38
“cute”… But I had trouble getting past the opening scenario of how the Little family acquired Stuart in the first place. Now, I understand “fairy tales,” etc.—and find no trouble in stretching my imagination for the sake of a good story. However, I had huge problems with the Littles going to an orphanage full of lovable children needing homes (the film-makers even made sure we saw them!)—and coming away with a talking rodent. Give us a break—I wouldn’t have liked him to have been born into the family, either—but how ’bout placed on their doorstep in a basket or something? I’m surprised no one else has remarked about this. My Ratings: [3/3]

Richard Tennesen, age 62
a good film, but had its disappointments… Great portrayal of the wonderful E.B. White book! Absolutely loved the film, yet was *very* disappointed that the cats were scripted to use swear words. If parents are careful to not say d**n and h**l in the presence of our children, why do moviemakers continue to desensitize everyone? Had I known those words were in the script, I would have waited for the movie to come out on video so I could edit it for my children. This kind of thing makes the wonder and greatness of the movie fade. My Ratings: [3/4½]

Karyn Davies, age 28
disappointing… I went to “Stuart Little” with hopes that this would be a cute, funny, and entertaining movie that even people my age would enjoy (like “Toy Story 2”). I must say that I was very disappointed. To start off, this movie just didn’t make any sense. A family adopts a mouse… why? Why a mouse?! Why couldn’t they adopt little Bobby who has freckles or Jill who can do handstands? Think how this must affect the morale of the children! And how can this mouse talk? I understand that this movie is aimed towards children, and often times animals can talk in children’s movies, but there is always some confusion to why they can talk. But in this film the couple just starts right on talking to the little mouse, not even considering the fact that that is a little strange. The only time the whole mouse-acting-like-a-human thing is even touched on is when the little snotty son sees his new “brother” and wonders why he didn’t get a human. That’s it. And what was the plot of this film? There was no obvious purpose that I could see. There were just a few sections of stories that made up the film (i.e. boat race, cat chase). Overall, this is just plain disappointing. My Ratings: [4/2½]

Jonny Leggett, age 14
“a cute movie”… DEFINITELY not anywhere near reality, but that’s what makes it cute. My Ratings: [4/5]

Gina, age 13
why the bad language?… This could be a positively adorable movie, except for the cussing. My friend and I were shocked when we heard the cat swear. It turned a perfectly clean movie into PG. Why was it needed? I think they’re taking it too far when they have to work d*mn and h*ll into children’s movies. My Ratings: [3½/4]

Leshell, age 14
funny—a winner… My 7 year old son and I saw this movie together and he commented afterwards that it was the funniest movie he’s ever seen. I agree that it was quite funny, very well acted, written, animated and produced. The movie would have been better without the three or four choice words used by one of the cat characters. I guess that’s what made the difference between a PG rating and a G rating. Nevertheless, this movie is a winner and provides GREAT entertainment, if you can filter out the unnecessary explitives. My Ratings: [3/5]

Rob, age 37
strong emphasis on love… “Stuart Little” is a fun family movie. It revolves around a family of three, and their adoption of a “little brother” in the form of an adorable talking mouse. The trouble begins when the family cat isn’t too fond of the newest member of the family, and Stuart’s attempts at fitting in with the human family that he loves so much. There are a few mildly offensive words in the film, but I feel that the strong emphasis on the love and importance of family, far outweighs any offense that the viewer might take because of the language. The animation in the film is wonderful, and I found myself believing that Stuart Little really would live happily ever after.

Kathy Jaffer, age 35
“grand and whimsical”… This movie was so fun! Stuart is one of the cutest little non-humans in a movie that I’ve seen since “Babe”. The producers of this film paid a lot of attention to all those minute details that make up for a grand, whimsical whole. I went with my parents and my 19 yr. old sister, and we all enjoyed it just as much as the children in the audience. :) The emotional themes are those of loyalty and love and family. My Ratings: [4/4]

H.K., age 22
“delightful”… My 9 year old son and I saw this movie together. We enjoyed it very much. It’s well made and the use of beautiful colors was visually fascinating, as was the delightful animation. I didn’t find the content objectionable at all, but it did contain some bad guys, or should I say, bad cats. The worst of the cats, Smokey, was a mobster-type character that used expletives like d--, maybe three times. If your kids are very young and/or sensitive, be aware the main character does get lost and the cats are “out for dinner.” I thought the movie was good because Stuart was accepted for who he was although he was different, and the movie emphasized the importance of a loving family. My Ratings: [4/5]

Denise, age 38
a good movie… This is a good movie. There were just a few cuss words that Smokey said. Smokey had a mafia voice. There are cat villains, and a boy villain. George gave Stuart a Roadster. It was a red convertible car. I liked his ship, The Wasp. Stuart really wanted a family, but nobody would adopt him because he was a mouse. The movie is very interesting. I highly recommend this movie. My Ratings: [4/5]

Ian, age 9
a lovable mouse and good family values… This is a light weight movie with a loveable little mouse character and good family values. Love and family pull it all together for a happy ending story, even if it is all quite predictable. We have some slightly crude dialogue of characters, mostly about passing gas. Nothing too heavy. I enjoyed the film aside from almost falling asleep about 3/4 way through it. Great computer animation, but I would recommend “Toy Story 2.