“Sue Thomas: F.B.EYE,” a groundbreaking, original drama premiering Sunday, October 13 with a two-hour opener (9:00 - 11:00 p.m., ET/PT) on PAX TV, is inspired by the true story of Sue Thomas, who although profoundly deaf from the age of 18 months, overcame significant obstacles to work surveillance for the F.B.I. This 9:00 p.m. Sunday night series is a coming-of-age, suspenseful drama starring Deanne Bray, a severely deaf actress who like Sue Thomas, was strongly encouraged by her parents to speak and read lips. "Sue Thomas: F.B.I." is entertainment aimed not just at hearing audiences but at the more than 28 million deaf and hard of hearing individuals in the United States (10% of the population). 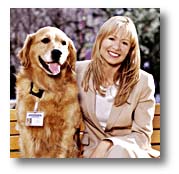 As portrayed in the series, Thomas (Bray) is a somewhat sheltered young deaf woman who has recently graduated from college and is about to start her first real job - which happens to be with the F.B.I. Disappointed when she is relegated to the tedious task of analyzing fingerprints, Sue doesn't remain there for long. A new acquaintance, F.B.I. agent Jack Hogan (Yannick Bisson) discovers her unique lip reading ability and enlists her to join the bureau's elite surveillance team. Suddenly Sue and her hearing dog, Levi, are "G-men," caught up in a good deal more action than they ever bargained for. But what they lack in experience, they make up for in spirit and enthusiasm.

"We believe this is a precedent-setting series," says Dave Alan Johnson, creator of "Sue Thomas: F.B.EYE." "Never before has there been a television show about the real life experiences and career of a deaf person - who is also portrayed by a deaf actor. When Deanne came in and auditioned against numerous other actresses - both hearing and deaf - she won the role. We knew right away what an incredibly gifted woman she was and that she perfectly embodied the persona of Sue Thomas."

"Each week, we'll present a fast-paced, inside look into high-profile F.B.I. cases based on actual recent and current events," said Gary R. Johnson, series creator. "Corporate scandal, diplomatic immunity, abuses of power and terrorist activity are just some other areas we'll explore. But the show is about more than that. It's about the courage, perseverance and humor of Sue Thomas. It's a series that will keep you on the edge of your seat, but will also make you laugh and cry."

"Sue Thomas's story is one I deeply understand because like Sue, I'm deaf," said Bray. "My hope is that this show will not only entertain - I'm sure it will do that - but that it can also be a bridge between different worlds, that it can help everyone understand that we are all more alike than we are different."

"Finally, audiences will be able to gain a deeper understanding and respect for the individuals who walk the path of silence," said Sue Thomas, now a motivational speaker and author, who serves as a consultant on the show. "I feel blessed that PAX will bring this message to television in such a powerful and positive way."