Sue, it is rare for us to hear such high praise on any televised program, but your consistently has received kudos from young and old! Your fan base continues to grow and I'm sure you speaking ministry will receive a big boost too. 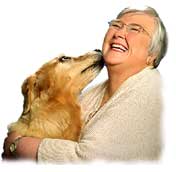 Thank you for the opportunity to interview you about your exciting new show called “Sue Thomas: F.B.Eye” (see our review page). And congratulations on the news that your story has become PAX TV's highest rated show ever!

"Sue Thomas: F.B.Eye" is based on your life story, right? Just how much of this series is real, and how much make believe?

The series is based upon my F.B.I. days in undercover surveillance. The 2 hour premier dealt with my life pretty directly. We are talking about 80% being real in varying natures.

How is it that your story became a television show? I mean did you just one day wake up and say "my life would make an interesting tv show"? What was the process whereby your story was taken to the small screen in "Sue Thomas: F.B.Eye" (first aired in October 2002)?

In 1990 I wrote my autobiography, Silent Night. Columbia Motion Pictures bought the movie rights and held them for one year. A short time later a second production company bought the rights and hired Dave and Gary Johnson to write the screen play. After 3 years, the option right expired and the Johnson brothers never forgot the project, and took it to television.

Does "Sue Thomas" have elements that make this an enjoyable and rewarding experience for both young people and adults?

It is a TV series made for the Mom & Dad—AND the kids!

The actress who portray you—Deanne Bray—is also deaf in real life. Is this a rare thing: having an actually deaf person in real life play one on tv?

This is very rare and history in the making—a television series about a real deaf persona being played by a deaf person is the first of its kind.

How did you and the creative team behind "Sue Thomas" (also the creators of the top-rated “Doc” program) decide that Deanne was just right for the part of Sue?

I saw it in her eyes—which conveyed a loneliness and separation but held the inner strength. I told the producers to look no further—they had found the actress.

I understand that the Animal Kingdom lends a crucial element to your story: your "hearing dog" Levi. Having never heard of a "hearing dog" before, can you please explain more about what this is?

Hearing dogs are trained to alert the deaf & hearing impaired to every day sounds by physical contact. When the sound goes off, the dog will jump up on the person and lead them to the sounds. Various sounds are: doorbell, doorknocker, telephone, fire alarm, smoke detector, boiling water, someone calling their owner's name, oven time, baby crying, etc.

What are you hoping will be some of the end results for viewers? Do you have a personal mission that you want to see happen?

I hope the series will inspire hope to all who watch it—that they can do anything.

How long did you work with the FBI? Do you have any stories you can share with us where your unique ability to read lips proved most useful?

I would imagine that, growing up, you must have wondered why God allowed you to become deaf at 18 months, even perhaps finding yourself angry with God. What kind of encouragement from your life experience can you give our readers who may be suffering with similar difficult circumstances?

God took my deafness, which at one time was my worst enemy and made it into my best friend. I wrestled and struggled and God always waited patiently for me. He never left me and I always knew His presence.

How big a role has your relationship with God through Jesus Christ played in your personal journey, including your career with the FBI?

Major! He is my Rock to whom I cling! I simply say “Yes” to Him and hung on for the most incredible ride of my life!

You are now involved with a Christian ministry in motivational speaking. Please explain what exactly you do in this ministry.

I regularly speak at women's and church weekend retreats, along with speaking in churches on Sundays and for special functions. I also speak to corporations as a true motivational speaker, which is a ministry. I am on the road about half the year doing this.

What kind of buzz for "Sue Thomas: F.B.Eye" is there among the 10% of the U.S. population who are deaf or hard of hearing?

There is a “roar” that even the deaf can hear. The deaf and hard of hearing have embraced this show as their own.