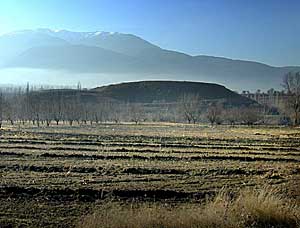 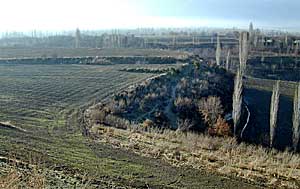 This was a city of Phrygia, on the Lycus River, which is a tributary of the Maeander River. Its inhabitants are called Colossians.

It was about 12 miles above Laodicea, and near the great road from Ephesus to the Euphrates, and was consequently of some mercantile importance. It was also near Hierapolis.

It does not appear that Paul had visited this city when he wrote his letter to the church there (Col. 1:2). He expresses in his letter to Philemon (verse 1:22) his hope to visit it on being delivered from his imprisonment. From Col. 1:7; 4:12 it has been concluded that Epaphras was the founder of the Colossian church.

This town afterwards fell into decay.

“That this city perished by an earthquake, a short time after the date of this epistle, we have the testimony of Eusebius.” (Adam Clarke’s Commentary on the Bible)

“…the tributaries of [the Lycus River] …brought a calcareous deposit of a peculiar kind that choked up the streams and made arches and fantastic grottoes. In spite of this there was much fertility in the valley with two other prosperous cities some ten or twelve miles away (Hierapolis and Laodicea).” —Robertson’s Word Pictures