keys in the Bible

Figures of ancient Egyptian keys are frequently found on the monuments of Egypt, also of Assyrian locks and keys of wood, and of a large size. The earliest lock and key device was found in Nineveh. Lock boxes with keys were commonly used by affluent ancient Romans. 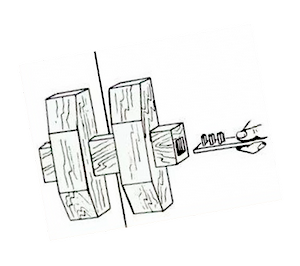 Example of an Egyptian wooden pin lock with key

Keys to the Kingdom of Heaven

Key of the House of David

Referring to Eliakim the son of Hilkiah, the Lord God of hosts said,

“Then I will set the key of the house of David on his shoulder, When he opens no one will shut, When he shuts no one will open.” —Isaiah 22:22 NASB

In the above verse, the word key is used figuratively of power or authority or office, as it is in…

“And to the angel of the church in Philadelphia write, ‘These things says He who is holy, He who is true, “He who has the key of David, He who opens and no one shuts, and shuts and no one opens” —Rev. 3:7 NKJV

Key to the bottomless pit

Then the fifth angel sounded: And I saw a star fallen from heaven to the earth. To him was given the key to the bottomless pit. —Rev. 9:1 NKJV

Then I saw an angel coming down from heaven, having the key to the bottomless pit and a great chain in his hand. —Rev. 20:1 NKJV

The “key of knowledge” (Luke 11:52; compare Matt. 23:13) is the means of attaining the knowledge regarding the kingdom of God.

Christ: “Woe to you lawyers! For you have taken away the key of knowledge; you yourselves did not enter, and you hindered those who were entering.” —Luke 11:52 NASB

Power of the keys

The “power of the keys” is a phrase in general use to denote the extent of ecclesiastical authority.