What are the…
Pools of Solomon 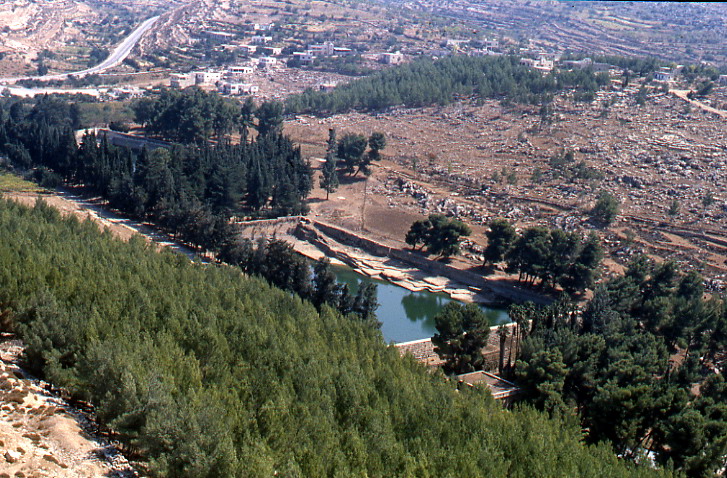 These pools derive their chief supply of water from a spring called “the sealed fountain,” about 200 yards to the northwest of the upper pool, to which it is conveyed by a large subterranean passage. They are 150 feet distant from each other, and each pool is 20 feet lower than that above it, the conduits being so arranged that the lowest, which is the largest and finest of the three, is filled first, and then in succession the others.

These pools were primarily designed to supply Jerusalem with water. From the lower pool an aqueduct has been traced conveying the water through Bethlehem and across the valley of Gihon, and along the west slope of the Tyropoeon valley, till it finds its way into the great cisterns underneath the temple hill. The water, however, from the pools reaches now only to Bethlehem. The aqueduct beyond this has been destroyed.

It has been estimated that these pools cover in all a space of about 7 acres, and are capable of containing 3-million gallons of water.

They were, as is generally supposed, constructed in the days of Solomon. They are probably referred to in Eccles. 2:6. On the 4th day after his victory over the Ammonites, etc., in the wilderness of Tekoa, Jehoshaphat assembled his army in the valley of Berachah (“blessing”), and there blessed the Lord.

Berachah has been identified with the modern Bereikut (Wady Bereikut), some 5 miles south of Wady Urtas, and hence the “valley of Berachah” may be this valley of pools, for the word means both “blessing” and “pools;” and it has been supposed, therefore, that this victory was celebrated beside Solomon’s pools (2 Chronicles 20:26).