Is there any evidence for the Biblical story of Sodom and Gomorrah's destruction by fire and brimstone (sulfur)? 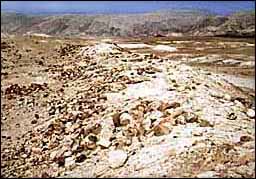 View east along the southern wall of the destroyed city of Sodom (Bab edh-Dhra) southeast of the Dead Sea in modern Jordan. Copyrighted. All rights reserved.

The ruins of Sodom and Gomorrah have been discovered southeast of the Dead Sea. The modern names are Bab edh-Dhra, thought to be Sodom, and Numeira, thought to be Gomorrah. Both places were destroyed at the same time by an enormous conflagration. The destruction debris was about three feet thick. What brought about this awful calamity? Startling discoveries in the cemetery at Bab edh-Dhra revealed the cause. Archaeologists found that buildings used to bury the dead were burned by a fire that started on the roof.

What would cause every structure in the cemetery to be destroyed in this way? The answer to the mystery is found in the Bible. “Then the Lord rained down burning sulfur on Sodom and Gomorrah—from the Lord out of the heavens” (Genesis 19:24). The only conceivable explanation for this unique discovery in the annals of archaeology is that burning debris fell on the buildings from the air. But how could such a thing happen?

There is ample evidence of subterranean deposits of a petroleum-based substance called bitumen, similar to asphalt, in the region south of the Dead Sea. Such material normally contains a high percentage of sulfur. It has been postulated by geologist Frederick Clapp that pressure from an earthquake could have caused the bitumen deposits to be forced out of the earth through a fault line. As it gushed out of the earth it could have been ignited by a spark or surface fire. It would then fall to Earth as a burning, fiery mass.

It was only after Clapp formulated this theory that Sodom and Gomorrah were found. It turns out that the sites are located exactly on a fault line along the eastern side of a plain south of the Dead Sea, so Clapp's theory is entirely plausible. There is some evidence for this scenario from the Bible itself. Abraham viewed the destruction from a vantage point west of the Dead Sea. The Bible records what Abraham saw: “He looked down toward Sodom and Gomorrah, toward all the land of the plain, and he saw dense smoke rising from the land, like smoke from a furnace” (Genesis 19:28). Dense smoke suggests smoke from a petroleum-based fire. Smoke rising like smoke from a furnace indicates a forced draft, such as would be expected from subterranean deposits being forced out of the ground under pressure.

The destruction of Sodom and Gomorrah became an example in the Bible of how God judges sin. “Now this was the sin of your sister Sodom: she and her daughters were arrogant, overfed and unconcerned; they did not help the poor and needy. They were haughty and did detestable things before Me. Therefore I did away with them as you have seen” (Ezekiel 16:49-50).

FOR FURTHER READING (available from Associates for Biblical Research): “The Discovery of the Sin Cities of Sodom and Gomorrah,” by Bryant G. Wood, Bible and Spade, Summer 1999, pp. 67-80.

Copyright © 1995, 2001, Associates for Biblical Research, All Rights Reserved—except as noted on attached “Usage and Copyright” page that grants ChristianAnswers.Net users generous rights for putting this page to work in their homes, personal witnessing, churches and schools.