What about continental drift?

See this page in: Bulgarian, Spanish 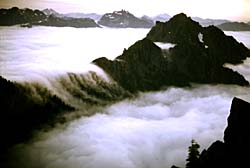 Before the 1960s, most geologists were adamant that the continents were stationary. A handful promoted the notion that the continents had moved (continental drift), but they were accused by the majority of indulging in pseudo-scientific fantasy. Today, that opinion has reversed—plate tectonics, incorporating continental drift, is the ruling theory. Interestingly, it was a creationist, Antonio Snider, who in 1859 first proposed horizontal movement of continents catastrophically during the Genesis flood.1 The statements in Genesis 1:9-10 about the gathering together of the seas in one place, which implies there was one landmass, influenced his thinking.

Geologists put forward several lines of evidence that the continents were once joined together and have moved apart, including:

The current theory that incorporates seafloor spreading and continental drift is known as “plate tectonics.”2

The general principles of plate tectonic theory may be stated as follows.3 The Earth's surface consists of a mosaic of rigid plates, each moving relative to adjacent plates. Deformation occurs at the edges of the plates by three types of horizontal motion: extension (or rifting, moving apart), transform faulting (horizontal slipping along a fault line), and compression, mostly by subduction (one plate plunging beneath another).

Extension occurs as the sea floor pulls apart at rifts, or splits.

Transform faulting occurs where one plate slips horizontally past another (e.g., the San Andreas Fault of California).

Compression deformation occurs when one plate subducts beneath another, e.g., the Pacific Plate beneath Japan and the Cocos Plate beneath Central America, or when two continental plates collide to produce a mountain range, e.g., the Indian-Australian Plate colliding with the Eurasian Plate to form the Himalayan Mountains. Volcanoes often occur in regions of subduction.

One argument advanced for plate tectonics is seafloor spreading. In ocean basins, along mid-ocean ridges (e.g., the Mid-Atlantic Ridge and East Pacific Rise), observations are interpreted to indicate that plates are diverging, with molten material from the mantle4 rising up in the gap between the plates and cooling to form new crust under the ocean. The youngest crust is at the ridge axis, with progressively older rocks away from the axis. Worldwide, it is estimated that currently about 20 cubic kilometers of molten magma rises each year to create new oceanic crust.5

At the time of cooling, some of the rocks' minerals acquire magnetism from the Earth's magnetic field, recording the field's direction at the time. Evidence indicates that the Earth's magnetic field has reversed many times in the past. So, during the cooling, some of the oceanic crust was magnetized in a reverse direction. If seafloor spreading is continuous, the ocean floor should possess a smooth magnetic “tape-recording” of reversals.

Indeed, the zebra stripe pattern of linear “magnetic anomalies” parallel to the mid-ocean ridge crest has been recorded in many areas.6

While the zebra-stripe pattern has been confirmed, drilling through the basalt adjacent to the ridges has shown that the neat pattern recorded by dragging a magnetometer above the ridge is not present when the rock is actually sampled. The magnetic polarity changes in patches down the holes, with no consistent pattern with depth.7 This would be expected with rapid formation of the basalt, combined with rapid field reversals, not the slow-and-gradual formation with slow reversals assumed by uniformitarians.

Evidence indicates that the continents have moved apart in the past, but can today's supposed drift rates of 0.78 - 5.9 inches [ 1.98 to 14.99 centimeters] per year be extrapolated far back into the past? Is the present really the key to the past, as uniformitarians earnestly proclaim? Such extrapolation would mean that an ocean basin or mountain range would take about 100 million years to form.

The Bible does not speak directly about continental drift and plate tectonics, but if the continents were once together, as Genesis 1:9-10 suggests, and are now apart, how does that fit into a biblical view of geology with a time line of only thousands of years?11

Dr. John Baumgardner, working at the Los Alamos National Laboratories (New Mexico), has used supercomputers to model processes in the Earth's mantle to show that tectonic plate movement could have occurred very rapidly, and “spontaneously.”12 This concept is known as catastrophic plate tectonics. At the time of writing, Baumgardner, a creation-scientist, is acknowledged as having developed the world's best 3-D super-computer model of plate tectonics.13

The model proposed by Baumgardner begins with a pre-flood super-continent (“Let the waters… be gathered together into one place” Genesis 1:9) and dense ocean floor rocks. The process starts with the cold and dense ocean floor beginning to sink into the softer, less dense mantle beneath. The friction from this movement generates heat, especially around the edges, which softens the adjacent mantle material, making it less resistant to the sinking of the ocean floor.14 The edges sink faster, dragging the rest of the ocean floor along, in conveyor belt fashion. Faster movement creates more friction and heat in the surrounding mantle, reducing its resistance further and so the ocean floor moves even faster, and so on. At its peak, this thermal runaway instability would have allowed for subduction at rates of meters-per-second. This key concept is called runaway subduction.

Thus, crustal spreading zones would rapidly extend along cracks in the ocean floor for some 6,000 miles where the splitting was occurring. Hot mantle material displaced by the subducting slabs would well up, rising to the surface along these spreading zones. On the ocean floor, this hot mantle material would vaporize copious amounts of ocean water, producing a linear geyser of superheated steam along the whole length of the spreading centers (perhaps the “fountains of the great deep”? Genesis 7:11; 8:2). This steam would disperse, condensing in the atmosphere to fall as intense global rain (“and the flood-gates of heaven were opened” Genesis 7:11). This could account for the rain persisting for 40 days and 40 nights (Genesis 7:12).

Baumgardner's catastrophic plate tectonics global flood model for Earth history15 is able to explain more geological data than the conventional plate tectonics model with its many millions of years. For example, rapid subduction of the pre-flood ocean floor into the mantle results in new ocean floor that is dramatically hotter, especially in its upper 60 miles, not just at spreading ridges, but everywhere. Being hotter, the new ocean floor is of lower density and therefore rises 3,000 to 6,000 feet higher than before and implies a dramatic rise in global sea level.

This higher sea level floods the continental surfaces and makes possible the deposition of large areas of sedimentary deposits on top of the normally high-standing continents. The Grand Canyon provides a spectacular window into the amazing layer-cake character of these sediment deposits that in many cases continue uninterrupted for more than 600 miles.16 Uniformitarian (“slow and gradual”) plate tectonics simply cannot account for such thick continental sediment sequences of such vast horizontal extent.

Moreover, the rapid subduction of the cooler pre-flood ocean floor into the mantle would have resulted in increased circulation of viscous fluid (note: plastic, not molten) rock within the mantle. This mantle-flow (i.e., “stirring” within the mantle) suddenly altered the temperatures at the core-mantle boundary, as the mantle near the core would now be significantly cooler than the adjacent core, and thus convection and heat loss from the core would be greatly accelerated. The model suggests that under these conditions of accelerated convection in the core, rapid geomagnetic reversals would have occurred. These in turn would be expressed on the Earth's surface and recorded in the so-called magnetic stripes.17 However, these would be erratic and locally patchy, laterally and at depth, just as the data indicate,18 even according to the uniformitarian scientists cited earlier.

This model provides a mechanism that explains how the plates could move relatively quickly (in a matter of a few months) over the mantle and subduct. And it predicts that little or no movement would be measurable between plates today, because the movement would have come almost to a standstill when the entire pre-flood ocean floor was subducted. From this we would also expect the trenches adjacent to subduction zones today to be filled with undisturbed late-flood and post-flood sediments, just as we observe.

Aspects of Baumgardner's mantle modeling have been independently duplicated and thus verified by others.19 Furthermore, Baumgardner's modeling predicts that because this thermal runaway subduction of cold ocean floor crystal slabs occurred relatively recently, during the flood (about 5,000 or so years ago), then those slabs would not have had sufficient time since to be fully assimilated into the surrounding mantle. So, evidence of the slabs above the mantle-core boundary (to which they sank) should still be found today. Indeed, evidence for such unassimilated relatively cold slabs has been found in seismic studies.20

The model also provides a mechanism for retreat of the flood waters. Psalm 104:6-7 describes the abating of the waters which had stood above the mountains. Verse 8 most naturally translates as, “The mountains rose up; the valleys sank down,”21 implying that vertical Earth movements were the dominant tectonic forces operating at the close of the flood, in contrast to the horizontal forces dominant during the spreading phase.

Plate collisions would have pushed up mountains, while cooling of the new ocean floor would have increased its density, causing it to sink and thus deepen the new ocean basins to receive the retreating flood waters. It may be significant, therefore, that the “mountains of Ararat” (Genesis 8:4), the resting place of the ark after the 150th day of the flood, are in a tectonically active region at what is believed to be the junction of three crustal plates.22

If an inch [2.54 centimeters] or so per year of inferred movement today is extrapolated back into the past as uniformitarians do, then their conventional plate tectonics model has limited exploratory power. For example, even at a rate of four inches [10.16 centimeters] per year, it is questionable whether the forces of the collision between the Indian-Australian and Eurasian Plates could have been sufficient to push up the Himalayas. On the other hand, catastrophic plate tectonics in the context of the flood can explain how the plates overcame the viscous drag of the Earth's mantle for a short time due to the enormous catastrophic forces at work, followed by a rapid slowing down to present rates.

Continental separation solves apparent geological enigmas. For instance, it explains the amazing similarities of sedimentary layers in the northeastern United States to those in Britain. It also explains the absence of those same layers in the intervening North Atlantic ocean basin, as well as the similarities in the geology of parts of Australia with South Africa, India, and Antarctica.

Early skepticism about plate tectonics has largely evaporated because the framework has such great explanatory power. The catastrophic plate tectonics model for the flood not only includes these explanatory elements, but also accounts for widespread evidences of massive flooding and catastrophic geological processes on the continents. Future refinement of the model may also help to explain the order and distribution of fossils observed in the fossil record in the context of the Genesis flood.

The Bible is silent about plate tectonics. Many creationists believe the concept is helpful in explaining Earth's history. Some are still cautious. The idea is quite new, and radical, and much work has yet to be done to flesh out the details. There may even be major modifications to the theory that increase its explanatory power, or future discoveries could cause the model to be abandoned. Such is the nature of scientific progress. Scientific models come and go, “But the word of the Lord endures forever” (1 Peter 1:25).