Can we explain the “long days” of Joshua and Hezekiah?

“So the sun stood still, and the moon stopped, till the nation avenged itself on its enemies, as it is written in the Book of Jashar. The sun stopped in the middle of the sky and delayed going down about a full day. There has never been a day like it before or since…” —Joshua 10:13-14

In Joshua 10, the Bible tells the story of the day when the sun—and time—stopped. The Israelites were fighting the Amorites in Canaan. During the battle, Joshua prayed for the sun and moon to stop, so he would have extra daylight to finish the task. Scripture records that this prayer was answered: The sun “delayed going down about a full day” (verse 13). The very objects in the sky that the Amorites worshipped fought against them!

Several modern interpretations of the story have been suggested:

All of these explanations fall far short of the statement that there has never been another day like the one described (Joshua 10:14, cf. Habbakuk 3:11 - “…Sun and moon stood still in the heavens…”).

What really happened on that special day? As with all miracles, it is futile to speculate with scientific theories. The details are unclear, but we know that God could have refracted the light, or slowed the Earth’s rotation, or stopped the entire universe—all with equal ease! 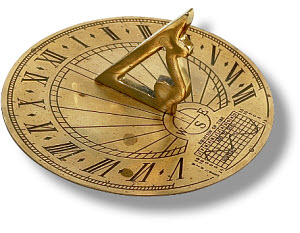 God used this event as a special sign to show Hezekiah that he would regain his health. The sun’s shadow moved backwards by ten steps, probably five to six hours on the sundial. That is, the sun appeared to move eastward instead of westward. The conclusion is again the same, that such a miracle is beyond scientific explanation.

God may have temporarily reversed the Earth’s rotation, including all its inhabitants, or the miracle in Hezekiah’s day could have been local instead of worldwide. The latter view is supported by 2 Chronicles 32:31, which describes envoys who traveled to the land where the miracle occurred.

Joshua and Hezekiah both made lofty requests of the Lord, that the very heavens might be altered. And God answered their prayers. The sun, moon, and stars obey the Creator who placed them in the sky by the power of his word.