The Flintstones in Viva Rock Vegas

for innuendo and brief language.

“The Flintstones in Viva Rock Vegas” is generally appropriate for children of almost any age. However, the film may lose a lot of potential viewers who are teen or older. But for children and fans of the Flintstones, this lighthearted and delightful story may be worthwhile. 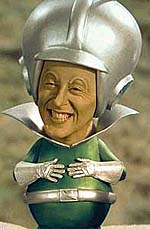 This film shows how two “prehistoric” couples from Bedrock meet. The few kissing scenes of affection between the couples are happily devoid of the overdone kissing scenes all too common in Hollywood movies today. Within the story is an overlaid plot of an alien who is supposed to observe Earthling mating rituals. What could have been offensive was handled appropriately, but while children found this portion funny my adult mind unfortunately did not. The only thing I could find as possibly unnecessary was the use of strapless dresses and some mild cleavage shown. This will be a personal issue of choice for each parent.

As some critics have said, the script is not inspiring. However, it is not meant to be. Rather, “The Flintstones in Viva Rock Vegas” is meant to emulate the feeling of an animated cartoon, not redefine the characters as being graduates of Princestone U.

It was a pleasure to take my 12 year-old mentee and watch him laugh at a movie without any of the shortcuts Hollywood usually takes to grab attention. Nor were there dubious innuendoes or other obvious sexual situations. He laughed more through this movie than through other recent children’s movies such as “Tigger”, “Pokémon” or “My Dog Skip”. Since I love the sound of children laughing, “Viva” gets 5 stars on the “induces laughter” category.

Technically, the photography and sets are very good; there is rich use of color in costumes and props. The art direction is also successful. The directing is good and each character is consistent. The voices of Fred, Barney and Betty even carry a good deal of authenticity, especially Barney and Betty’s trademark laugh. Guard yourself from being too critical; this story is meant to be silly and slapstick-oriented.

Most importantly, the story contains several strong moral lessons which outweigh any perceived negative content: one message teaches honesty, and another trust in relationships (even when appearances may deceive). A third valuable lesson is that money doesn’t equal happiness. (Wilma teaches that a girl’s hero should not be one based on wealth, but someone of simple means). But be ready for a unique twist as to how this gets presented.

There is the good guy/bad guy element in “The Flintstones in Viva Rock Vegas” where good always comes out ahead. Each lesson is understandable for children and presented on their level.

Generally an excellent movie. One part that troubled me, though, was when Barney told Fred that Betty wanted to take him home. I believe the comment was, “She wants to cook breakfast for me in the morning. I don’t know what we’ll do before then, but boy do I love to eat!” (the film quickly moves to the next day, with no further explanation) I realize this implication to pre-marital sex probably went over most kids’ heads, but unless I am misreading, what was that doing in a Flintstones movie? My Ratings: [3/3]

Kevin, age 24
This is a great movie to take your kids to. They will stay intrested in it throughout the whole time. The aliens in the beginning will definitley have their attentions. There is one line that suggests something about sex, but it’s hard to notice… But the all-around quality of the movie was good. It has suspense, humor, romance, and family values. My Ratings: [3½/4]

Jessica, age 18
Very funny. My two girls loved it. Great for kids of all ages. Audrey (age 8) laughed through the whole movie. My Ratings: [4/4]

Conny, age 42
Excellent movie, much better that the first one. Worthy of the name “Flintstone”. Had a cartoon quality, which is a good thing. Good for kids and adults. We all laughed out loud at times. Great family fare. This is one that is done right. My Ratings: [4½/5]

Russ McFall, age 47
The review does not mention the cleavage, the briefest of female costumes, and well over 3/4 of the movie devoted to pursuit of the girls. Must pre-teens be targeted now that the teens are lost? I took my 9 year old daughter and she said she would not recommend it to her friends at school. Why? Strapless dresses and too much kissy stuff. Dino was funny, but only is on screen a few mintues. She considers the “Honey I Shrunk/Blew Up the Kids/Baby/Us” movies far better. My Ratings: [2/2]

Bill Williams, age 52
Why do they keep making this film? Was “Flintstones” really that great as a cartoon anyway? I mean, it’s about a big lug who picks on his little buddie and calls it friendship. Not to mention the sly undertones of what a “wife” should and shouldn’t be… I am so tired of lame movies… My Ratings: [3/2]

Coni, age 34
Much of this movie was a lot of fun. Dino was great! The actors were intentionally wooden—taking on the likeness of cartoon characters. Special effects were great! I wouldn’t take kids to see it as there were subtle bad messages: sexual innuendo, the parents were vain, foolish and unprincipled, Fred’s boss was a dope, etc. My Ratings: [2½/3]

Joe Leydon, Variety
…feels more like a cartoon… [than] the 1994 movie “The Flintstones”… This is a love story…

Eric Harrison, Los Angeles Times
…unapologetic goofball of a movie. It makes no pretense of brains or decorum. It’s dumb, screwy and proud…