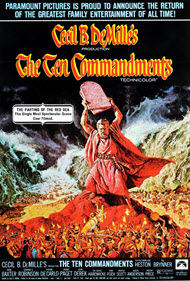 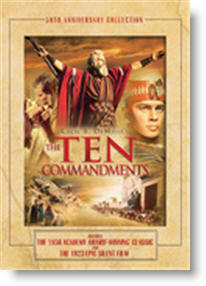 The story of Moses (illustrated)

The man who wanted to see God

Details about Moses of the Bible

With an all-star cast and a high budget, this was and still is an impressive Biblical epic.

We see the panorama of Moses’ life: his mother putting him into the bulrushes to be found by Pharaoh’s family; the early Egyptian career and the exile to Midian; the call from the Burning Bush; the plagues and the Red Sea; the giving of the Law. There are many details added which are not found in the Scriptures (the credits acknowledge that the books “On Eagles’ Wings,” “Pillar of Fire” and “The Prince of Egypt” were used as source material), and some events are altered or merged. I do not agree that while Israel was in Egypt, both they and Abraham’s other descendants had no name for God. And I believe that Moses’ real mother, while nursing him for Pharaoh (which in that culture might have gone on for much longer than we’re accustomed to today), used that time to instill something of the knowledge of the true God (and probably a knowledge of his own identity) in him. But compared to what Hollywood has done in some other Biblical films, this one came out very well. The overall picture of the Israelites being delivered from Egypt by the hand of God is correct, and is treated seriously and respectfully.

There’s no way to tell this story without some historical depictions of violence and death. These scenes are not exploitative in any way. Charlton Heston as Moses and Yul Brynner as the Pharaoh of the Exodus are both excellent. For anyone seeing this film for the first time, the sadness of Pharaoh causing untold suffering by hardening his heart against the commandments of God is not soon forgotten. And there’s the lesson for all of us.

Learn more about the Ten Commandments—GO

The best Biblical epic out there. Of course, Hollywood had to add some things that were not based on Scripture, but overall, this film is very impressive, and totally suitable for family viewing. My Ratings: [5/5]

Hillari Hunter, age 38
I have always enjoyed this movie. The only complaint I have, is Hollywood’s persistance in including sappy love stories with no Biblical basis. There was no “Egyptian princess” smitten with Moses, and when I finally read the Biblical account for the first time, I was greatly surprised at how much was different. But, NOTHING tops the “parting of the Red Sea”! My Ratings: [4½/4½]