for language and sports violence. 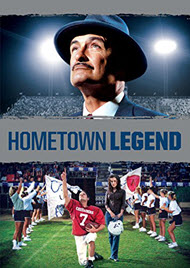 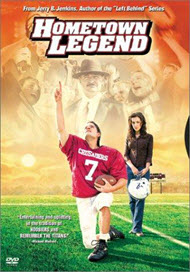 They say that in the Southern states of the U.S., people care most about two things: God and football. “Hometown Legend”, first-time project from Jenkins Entertainments (father/son team Dallas and Jerry B. Jenkins), tells the story of Athens, Alabama. Rachel Sawyer (Lacey Chabert, “Party of Five,” “Lost in Space”) narrates for us, filling in the past 12-year history of Athens that has practically died since high school football coach Buster Schuler (Terry O'Quinn—“American Outlaws,” “Ghosts of Mississippi”) lost his son in a game and gave up coaching. That was 12 years ago. Now fast forward to the present where Coach Schuler returns for one last year, the very last season the school will ever have since the county has decided to shut down the high school and bus the kids to a neighboring district.

Since the death of #7, a scholarship fund set up by the town honors the most valuable player on the team, providing their way to a full ride at the University of Alabama. Kids come from all over the area to prove they have what it takes, but the curse in this is that the team is never able to act as a team… as one whole unit.

Appearing as if from nowhere comes Elvis Jackson (Nick Cornish), a showoff with an attitude who turns out to be quite an impressive player. While the team still struggles throughout the season, #40 Elvis Jackson brings renewed hope to the entire town of Athens. Yet in his personal life, his constant sorrows have brought him to the conclusion that God doesn’t exist and certainly prayer is useless. That’s why his relationship with Rachel (Chabert), the daughter of the assistant coach Cal Sawyer (Kirk B.R. Woller, “Minority Report”) who is his “Fellowship of Christian Athletes prayer warrior,” gets off to a rough start. After all, why should he need prayer when he can do it all himself… can’t he?

Eventually the two soften toward each other, mirroring the relationship in many ways between bad boy Landon and churchgoing Jamie in “A Walk to Remember”. One of the complaints many Christians may have with this film, though this isn’t a “Christian” film per se, is that Elvis and Rachel do begin a dating relationship toward the end of the movie (I’m not giving anything away here—you can’t miss the signs along the way). (For some biblical positions on dating, see What does God think of “missionary dating”? and What are the Biblical guidelines for dating relationships?). On the positive side, it is only after Elvis refers to himself as a “Crusader” and has an about-face in his position on God… certainly a step in the right direction.

The acting and technical offerings in “Hometown Legend” are fine (except for one minor character who wasn’t supposed to be that likable anyway). For a first time film, Jenkins Entertainment offers a fun treat in “Hometown Legend”. “Our goal is simply to make movies that impact people regardless of budget or genre,” said producer Dallas Jenkins. If that’s the goal, I’d say they’ve met it. Executive Producer Jerry Jenkins further explains that he wants “the audience and book readers to come away from this story feeling that there is hope in the midst of struggles, that there’s a God who loves you in addition to the strength that comes from community and teamwork.”

Positive
Positive—I rarely purchase a movie without seeing it first, but I made an exception with “Hometown Legend.” I love football movies and Jerry Jenkins novels are so above par, that I had a feeling that this movie would be worth the money. Well, I’m happy I followed my instincts! What a great movie. If you love small town/football movies, you will LOVE this one. When people tell you that it was made for ONLY 2 Million dollars, don’t let that keep you from this movie. The cinematography is excellent, the acting is superb and there is absolutely no OVER acting, that we so commonly see. Incredible movie! I highly recommend it for the whole family!
My Ratings: [Good / 4]

Dan Arthur, age 32
Positive
Positive—My family and I rented this movie because it was produced by the Jenkins. We have 3 teenage boys and a teen daughter. We truly enjoyed the movie except for one thing. The girl who was supposed to be a Christian dressed poorly. Our boys are trained to turn off the movies/commercials etc., where women are showing too much flesh, or too tight. It was disappointing to see this in this movie. I felt the message was great, and the movie was wholesome, except for this negative point. It’s too bad that we have to compromise in this area.
My Ratings: [Good / 4]

Lori, age 47
Negative
Negative—I was very disappointed to see the attitude towards God is very irreverent in this movie. God does not need to show off for anyone, and he expects us to reverence His name and to fear Him. It seems the people in this production look to God as a sugar daddy or a Santa Claus. The whole picture exudes rebellion and pride. My Bible teaches that God is trying to call out a peculiar people who are faithful to Him and His plan for mankind. All down through the ages, God has worked with different people to have a class of people who are obedient. I cringed to hear the way God was presented in this flick.
My Ratings: [Very Offensive / 1]