for language, sensuality, drug content and images of nudity 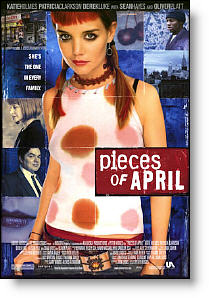 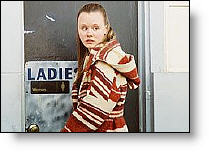 Here’s what the distributor says about their film: “21-year old April Burns (Katie Holmes) lives with her boyfriend Bobby (Derek Luke) in a dilapidated tenement on New York City’s Lower East Side. April has never been on good terms with her mother, Joy (Patricia Clarkson), but Bobby convinces her to host her family for Thanksgiving.

If preparing a holiday feast isn’t enough pressure, April discovers her oven is broken. With Bobby out on a mysterious errand, April is left to search the building for an apartment with a working oven.

April must appeal to an array of neighbors, who until now have only been strangers in the hallway. Eugene and Evette (Isaiah Whitlock and Lillias White), an African-American couple, have their own meal to make, but they let April use their oven for an hour. Now April has to find another oven to finish the job. the Chinese family downstairs might save the day, if they only spoke English. April thinks she might have the answer to her problems in Wayne (Sean Hayes), the proud owner of a brand new, self-cleaning convection oven.

While April struggles to get her bird cooked and Bobby tries to complete his errand, the Burns family heads down the highway recounting April’s failures. April’s father, Jim (Oliver Platt), is determined to create an experience that will become a nice memory, but Joy persists in undermining his plans. Perfect-daughter Beth (Alison Pill) reminds everyone of her sister’s shortcomings. Grandma Dottie (Alice Drummond) can barely remember anyone’s name, and the youngest child, Timmy (John Gallagher, Jr.), manages to dodge the emotional bullets by photographing every awkward moment.

Negative
Negative—This movie was probably one of the strangest I have ever seen. It has that “home-video” quality to it and reminds me of watching a documentary. The humor is pretty dark, but the story-line is so realistic that its sad. There are so many families that are like this one, completely dysfunctional. The sex scene was definitely unnecessary, and while they weren’t naked, it still showed the top half of them while they were “in the act”…
My Ratings: [Average/2]

E! Online
…Profanity: Heavy | Alcohol/Drugs: Heavy | Sex/Nudity: Heavy… an unmarried, but living together couple has sex (with movement and sounds), and some photos show before and after topless photos of a mastectomy patient…