for intense thematic material, some violence and brief language 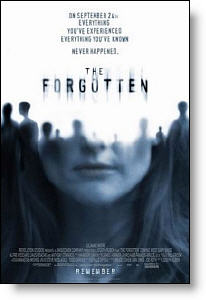 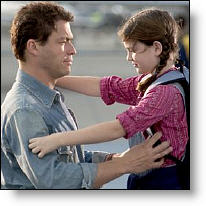 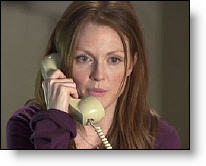 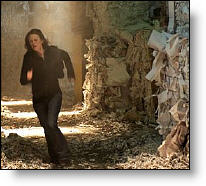 This is an incredible (as in “unbelievable”) SciFi flick. Of course, since ALL SciFi is unbelievable, I mean that this one is far-out compared to the genre standard.

In the opening, Telly Paretta (Julianne Moore) is still in grief over having lost her nine-year-old son Sam in a plane crash 14 months before. Her husband Jim (Anthony Edwards) and her shrink Dr. Jack Munce (Gary Sinise) are as supportive as possible.

We see little clues that Telly is apparently forgetful. She thinks she parked her car on one side of the street, but it’s actually on the other side. At a therapy session, she says the coffee cup she was just drinking from has disappeared; Munce says she didn’t actually have coffee that day. But she can still taste the coffee. Munce says she’s just smelling HIS coffee, and creating a taste memory from the smell memory.

Then things begin to get really strange. Sam’s image disappears from a family photo. Then ALL his photos disappear, and videotapes of him become blank. When Telly confronts Jim about this, both he and Munce tell her that the albums and tapes were ALWAYS empty, that Sam never existed. He was stillborn, and she in her grief has been manufacturing an alternate life about him for the last ten years. Now that she’s finally recovering, Sam’s pictures are disappearing from her mind.

The prior little clues about forgetfulness and confusion, plus the fact that even the library archive copies of the newspapers no longer contain stories about the plane crash, lead us to believe that Jim and Munce are right, that Telly is delusional. But anyone who’s seen the promo trailer knows it’s not that simple. Telly is on to something very weird. She eventually teams up with Ash Correll (Dominic West), who lost a daughter on the same plane crash. He’s in a pretty constant drunken state, and at first denies that he ever had a daughter. But later, prompted by Telly, he remembers. From there, the film takes on a Twilight Zone or X-Files atmosphere as Federal agents try to apprehend Telly and Ash, and a mysterious man (who can’t be killed and may be an Alien) repeatedly appears in front of them.

The entire cast turns in powerful performances. Moore, appearing without glamour makeup, is convincing as the mother who simply won’t let go. West is a brooding, multi-faceted supporting character. Edwards (who was a scene-stealer in Top Gun and is best known for his work on TV’s “ER”) does a great job with his limited screen time. Same for Sinise, and for Alfre Woodard as a Detective who wonders why the Feds are so interested in Telly.

The production values are very high. Everything looks and feels convincing. The theme music, the special effects, all big-budget. The only possible downside is the storyline itself. Some commentators are calling it derivative fluff. I’m withholding judgment.

Sex: In therapy, Munce asks Telly about the quality of her sex life; she avoids answering. When on the run, Telly and Ash share motel rooms, but avoid any sexual activity. Telly is seen in her underwear in one sequence.

Language: There’s one f*, about five uses of g*d* and about twenty other profanities. Considering the possibility that their children have been abducted and the government is covering it up, Telly and Ash are fairly restrained in their language. When profanity does occur, it stands out the more because it’s rare. But of course it’s not necessary at all.

Violence: Ash fights with Federal agents, captures one and threatens to torture him for information. The mysterious man is run over by a car, is shot, and falls from a great height, but all without injury. There are some other violent events that I can’t detail without giving away the bulk of the plot.

Other negative content: Ash drinks to forget the loss of his daughter, and apparently it’s worked (helped along by spooky forces, perhaps). BUT, after he regains his memories, and Telly confronts him with the fact that she needs him as a sober and in-control ally, he stops drinking.

The possibility that Earth is under the control of Aliens, we’re all at their mercy and no God protects us from them, is unscriptural on several levels. But going into a film like this, you have to suspend disbelief on that point. SciFi is often written as a parable of one major truth, even though it usually manages to teach occultism, Humanism, Feminism or New Age doctrine as well.

Positive content: The mother-child bond is exalted as a force that nothing can break. And at the ending, there’s a pro-life twist. A “memory thief” wants Telly’s “first memory” of Sam. He decides that that would be the memory of his birth. But even after that memory is stolen from her, she STILL remembers Sam, because she remembers back beyond that, to the time when life was growing inside of her.

Is this film worth seeing? If you like SciFi, and can handle edgy PG-13 material, suspense, heartbreak and some far-out twists, you’ll probably like it. For non-SciFi people, it will probably seem like a waste of a talented cast.