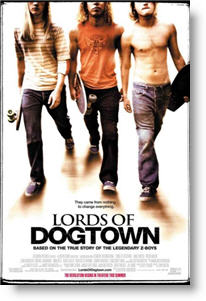 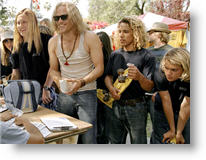 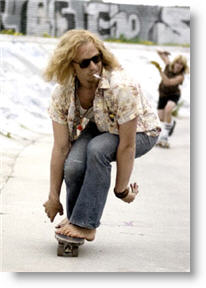 Here’s what the distributor says about their film: “In the 1970s, a group of teenage surfers from a tough neighborhood known as “Dogtown” in Venice, CA pioneered a revolutionary new style of skateboarding. Riding the waves at the Pacific Ocean pier, the Z-Boys, known for their aggressive style and hard street attitude, combined the death-defying moves of surfing with the art of skateboarding and became overnight sensations and local legends. With empty pools as their canvas, the Z-boys paved the way to what is now referred to as “extreme sports,” and created a lifestyle that spread infectiously to become a worldwide counterculture phenomenon. But all of this fame would take its toll on the friendships that they thought would last a lifetime as the sport that started out as an afternoon hobby turned into big business.”

They came from nothing to change everything.

While “The Lords of Dogtown” contains a lot of skateboarding, it is primarily a movie about relationships. What can happen when a group of teenagers, who have nothing, find fame and fortune overnight? How does their attitude toward family, friends and even themselves change in the process?

The story revolves around the lives of Stacy Peralta, Tony Alva, Jay Adams and another friend named Sid. These teens were a part of the skateboard team known as the Z-boys. They took this name because the Zephyr Surf Shop owned by Skip sponsored them.

The boys were all from low-income families. Skip organized them into a team and used their success to promote his own business. He tried to mentor them, but he didn’t have his act together any better. His constant drunkenness and bad attitude eventually alienated him from the teens. Sid wasn’t much of a skater because of a physical problem with his equilibrium, but as a friend, he was always there. The others made fun of his difficulties on occasion, not realizing his obstacles could be signs of a more serious problem.

Jay had his own set of problems. He didn’t have a father in the home, and his mother was mentally unstable from taking so many illegal drugs. At times, he appeared to be more responsible than she was. Tony’s family was so poor that he jumped at the first opportunity to make “big money.” Stacy was the one boy that had regular employment. He was dedicated to his job and generally acted responsibly. This cost him a place on the Z-boy team at first, but he later proved his abilities and joined the others.

This isn’t a family film by any means, but there are some positive moments. In spite of the disagreements they get into, all four boys maintain a strong bond of relationship. Sid’s greatest contribution of friendship occurs at the end of the movie. Sorry, no spoilers. Jay shows commitment to his mother by trying to provide for her financially in a way she can’t do for herself. In the end, however, both Jay and Skip are examples of how not to live your life. Jay gets involved with gangs and the drug culture, while Skip finds it impossible to give up alcohol. They end up paying a price for their bad choices.

At times, the Z-boys would skate down the street smashing windows or other peoples’ property. The boys would also break into peoples’ homes to use their pools as their own skate park, and talk about stealing from the owners. They stole from a gas station and a convenience store. The movie also contradicted its own view on drug use. While Jay made a bad decision about getting involved with drugs, marijuana use is encouraged.

Profanity and sexual immorality are two more vices that seem to be a large part of this culture. There are about 50 mostly moderate profanities, including a half dozen uses of the Lord’s name in vain. Sex is even more prevalent. It would take a whole booklet to detail the implied sex, skimpy clothing and sexually explicit language in this movie, so I will just mention a few. Tony and his teenage sister have different beds, but still share the same small bedroom. They both bring a sex partner into the room. The girls undress to their underwear and sex is implied. Preparing to have sex, Sid unzips a girl’s blouse revealing her bra. In another scene, a man who is either a transvestite or cross-dresser makes a pass at Tony.

While the picture of the skateboard culture may be accurate, it’s unfortunate they didn’t attempt to help those who felt alienated and depressed. The film portrayed many in this society as neglected. If they could only see that God Himself wants to be the father, the mother or the friend they are missing. That kind of hope would help produce the greatest skateboarders the world has ever known.

This is definitely not a movie for children or even teens. The PG-13 rating should be taken seriously, and my belief is that it comes close to an R rating.

NOTE: The above review is of the PG-13 theatrical release version of “Lords of Dogtown.” The DVD version of this film is longer and unrated.

Positive
Positive—I thought this movie was awesome! Although it did have an amount of profanities, in the end the lesson that you learn is all worth it. It’s probably not appropriate for anyone under the age of 13. If you are into skating/surfing, you are going to definitely love this film. There are some questionable scenes, but if you are mature enough, you can look past them. I think that this is a grand movie that almost everyone would enjoy.
My Ratings: Average/5

Kristi Payne, age 18
Positive—I thought this movie was amazing! I loved it soo much! It is now my favorite! You have to like skateboarding, of course! Skateboarding is one of my favorite sports so it was really exciting for me! It was a very good story (it based after a true story).
My Ratings: Average/5

Stefanie, age 18
Negative
Negative—I wish I had checked this movie out before taking my 3 sons to see it. They all love skate boarding and from the previews I thought they would really enjoy this “true story.” Well, it was too true for me. What could of been a great story was over-shadowed by drugs, selfishness, sex and just pure stupidity! I did not like this movie at all. What kind of roll models are they suppose to be for our youth—and yes, by someone actually taking the time and MONEY to make this type of money, they should think about all the teenage boys that would flock to this “skateboard movie.” I felt sick and very disappointed in myself for not checking this movie out before allowing my boys to see it!
My Ratings: Extremely Offensive/1

Tammy Beaty, age 35
Comments from young people
Negative—This movie is my least favorite. The production quality was okay, the drug use and under-age sex scenes revolting, and the ending an extreme turn-off, as it (in my opinion) suggests that we the audience should admire the characters. In short, it has no redeeming qualities whatsoever. I suppose it’s a great example of how NOT to live, but don’t waste your time.
My Ratings: Extremely Offensive/3

Danae, age 17
Neutral—I must say, although the movie from a Christian point of view was overall offensive, I did enjoy it. If you’re not into skating, or surfing, or extreme sports in general then this movie isn’t for you. Lots of profanitys (most of them mild, no F bombs) all throughout the movie. There was one pretty heavy duty sex scene(no nudity but it was still heavy in content). A couple of punches thrown but no blood.

The whole movie is about how skating started, the kids act like real jerks in the entire movie and it was exaggerated. Yes, a lot of skaters are more on the rebel side, but if any of them did what they did in the movie, they’d be arrested.

That said, the movie really I must say I enjoyed. It showed how skating started to when it got really big. It shows how 4 kids who just liked to skate get famous, and how that fame tore them apart (of course in the end they came back together)

Although they were jerks, and although there was heavy drug, language, and moderate sex, they were always there for each other,especially at the end when one of them comes down with brain cancer.

I enjoyed the movie, and if you can look past the stuff I listed then it really is an enjoyable movie. It is DEFINITELY not for anyone younger then the 14/15 age range.
My Ratings: Very Offensive/3½

Glenn Whipp, L.A. Daily News
…if you want the best examination of this extreme sport, stick with the documentary. In the case of the Zephyr skate crew, truth is better than fiction.

Michael Senft, The Arizona Republic
…The movie is like a daydream, and it’s most infectious when the characters are in motion or misbehaving, which is often.

Wesley Morris, Boston Globe
…there no need for this movie.Both the surfing and skateboarding sequences are fun to watch, within reason, but after seeing “Dogtown and Z-Boys” and the haunting surfing documentary “Riding Giants” (2004), we know the real thing is more awesome.

Roger Ebert, Chicago Sun-Times
…much of the drama gets wiped out in a wandering confusion of characters, dates and places.