for some violence, disturbing images and thematic material. 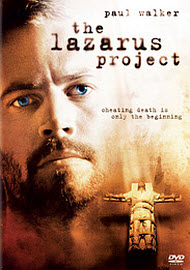 “Some realities have no escape. / Cheating death is only the beginning.”

“The Lazarus Project” (formerly called “The Heaven Project”) explores the possibility of a second chance at life to make better choices.

Ben Garvey (Paul Walker, “The Fast and Furious” movies) is on the upswing of life with a wife (Piper Perabo) and daughter (Brooklynn Proulx), a blue-collar job at the brewery, and celebrating his release from parole. His ex-convict brother Ricky (Shawn Hatosy) visits and entices him to assist in a robbery. Ben emphatically refuses at first, but the temptation to return to crime escalates when he loses his job. When the heist ends in tragedy, Ben suffers the consequences of a guilty verdict by Texas law for being an accomplice to murder. He refuses to believe that he is a killer, but accepts his end—execution by lethal injection.

Life after death for Ben begins on a rainy day in Oregon when Father Ezra (Bob Gunton) stops to offer him a ride to a psychiatric ward to work as a groundskeeper. As the story continues, Ezra adds to Ben’s inner struggle and tries to convince him that letting go of his past is best. Still, his deep instinct to return home was strong through the thriller ride of flashbacks with snakes, symbolism, angels of death, a spiritual guide, and a blurred demon-esque image. While manipulated hallucinations are mistaken for reality and vice versa, a medical experimentation is exposed to include coercion of the religious kind.

There are supporting roles that deserve notice and assist in telling the story, including: Father Ezra, who runs the facility, Avery (Lambert Wilson)—the spiritual guide, Julie (Linda Cardellini)—the psychiatrist love interest, Robbie (Malcolm Goodwin)—a mentally challenged patient, and William (Tony Curran)—an unpredictable patient with psychopathic tendencies. Nonetheless, Ben has the spotlight in most every scene, with a clever performance that will not disappoint.

Wrong for the right reasons is an obvious parallel in the life of Ben and Father Ezra. The instinct of Ben to protect his brother from death, as well as Ezra giving the guilty another chance, are good motivators. Nevertheless, the path taken to achieve the goal is positively wrong.

John Glenn’s screenplay and directing are conclusive evidence that a controlled life without free will promotes anxiety, in addition to other negative aspects.

As believers, we acknowledge that God is omniscient (knowing all things) and grants us free will. Yet, with the gift of free will also comes the ability to love Him voluntarily—each choice contingent upon the other. God’s love for us extends from the boundaries of control or its Earthly meaning. Unlike human love, God’s love is at no cost, and it cannot be earned—likewise He loves without partiality. God loves from Himself, because He is love (1 John 4:8).

There are several points of significance throughout this film, but one question stands out like an illuminated billboard sign—is death the end.

Humanity is condemned to an expected end, as taught in the book of Revelation, although we who follow Christ are given the opportunity to be represented on Judgment day and forgiven through His saving cup (John 3:16). There is only One—Jesus Christ—who cheated death so that we may have access to Heaven.

Neutral—Rented the movie and watched it with my boys (age 13). The boys never really got into the movie, and were very bored by the end. There are some twists, and it keeps you on your toes. However, even though the premise was interesting, they really missed the mark on delivery.

Bottom line: The acting was marginal at best, and there was a lot of Christian imagery that just came up short on Biblical truth.
My Ratings: Moral rating: Average / Moviemaking quality: 3

Marshall, age 47 (USA)
Neutral—This was an interesting movie. I found it interesting, because the film makers tried to turn it into a part thriller/horror movie through parts of the film. Eventually, it had a twist at the end and explanation to the uncanny strangeness going on at the ward, that no one would have ever imagined. It kept you guessing (which is always exciting), and the acting was well done. There is not very much sexual content, which was nice. The only offense I saw was throughout the movie with the “spiritual guide” and the demonesque vision scene and such. The positive outlook of the film is that there was a reason for Ben believing he was seeing such things as a “spirit guide” and so on. But the negative, if you will catch it and pay close attention, is there is no explanation as to why they had to add in the demon scene in the movie, because it makes no sense, other than they just tried to make it scary. Because all the other “spirit guides” and such were realistic characters in the end, while the demon was not.
My Ratings: Moral rating: Average / Moviemaking quality: 3½