for some mild language and brief questionable behavior. 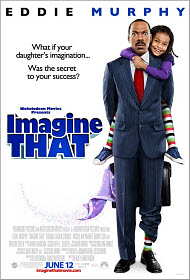 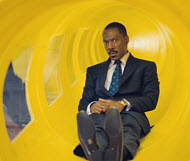 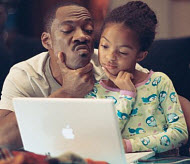 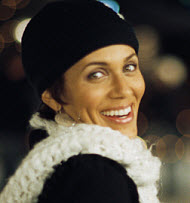 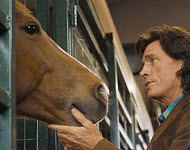 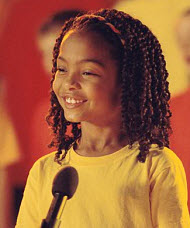 “What if your daughter’s imagination… Was the secret to your success?”

“Imagine That” is the story of a week in the life of Evan Danielson, played to a comedic tee by Eddie Murphy, as a very successful financial advisor who has been separated from his wife Trish (Nicole Ari Parker) and only plays part time Dad to his 7-year old daughter Olivia (Yara Shahidi).

Early on Evan is seen being interrupted at the office yet again (implied) by a call from Olivia’s school. Seems Olivia has been spending far too much time in the imaginary world under her blanket with the three princesses that live there. But every attempt Evan makes to pry her security blanket (the “Goo-Gaa”) from her is met with screams and he gives in as usual.

Johnny Whitefeather (Thomas Haden Church) is a recent up and comer at Evan’s firm and has been aggressively moving in to take Evan’s Clients. More motivational speaker than financial advisor Johnny uses his Native American culture as the centerpiece of his presentations and is able to stir the Clients into funny but agreeable frenzies. Adding to Evan’s insecurity is the fact that the firm is actively promoting the competition between him and Whitefeather.

Trish, Evan’s wife, needs him to watch Olivia for the week. While this couldn’t have come at a worse time, little does he suspect that Olivia and her imaginary friends are going to turn his life upside down. Evan soon realizes his daughter’s predictions, via her imaginary friends Koopida and Moppida, are actually coming true to the shock and delight of his boss and the growing dismay of his rival.

The Lord’s name is taken in vain twice in succession (OMG) and then while Evan ridicules Whitefeather with an exasperated prayer (Lord, Lord…). These are tame by Hollywood standards, but they added nothing to the narrative.

Another father plays dress and make-up with his daughter when the Mom was downstairs. This blurring of gender roles begs the question why the Mom couldn’t have been in his place?

A joke is made as to whether or not it would be legal to stab an associate. This subject is brought up again when the assistant returns with a report that the legal department says it would be unlawful.

A remark is made as to one person figuratively scalping another. Most disturbing was a scene where scissors are held in a somewhat threatening manner. This made the other character who is witness to this, as well as the audience, freeze in shock.

A 10-year old child is given multiple cans of an energy drink in order to coax insight from him without regards as to the possible health perils associated with the high intake of caffeine and sugar on children.

This film offers a great teaching opportunity for parents in several areas:

On the issue of imaginary friends it was brought up in a very realistic light. At first, seeing Olivia having conversations by herself seems strange, but studies have shown that imaginary friends are a more common part of many kid’s lives and are not harmful to their psyche.

Showing poor behavior, Whitefeather is a good example of not being able to accept criticism. Proverbs 15:12 does teach that “A mocker resents correction; he will not consult the wise.”

Regarding proper parental role playing one could consider Deuteronomy 22:5, “A woman must not wear men’s clothing, nor a man wear woman’s clothing…”

Perhaps the biggest lesson is the one that most mainstream family movies inherently understand, but don’t recognize. Evan Danielson’s life was rich, but hollow. His success had not brought him the happiness he had supposed and it was only when he focused on ‘the good thing’, his daughter, that his life took on meaning. Jesus speaks to this problem all of us go through when we focus on the wrong things and find life meaningless. Most importantly he gives us an answer in Matthew 6:33 when he says, “But seek first his kingdom and his righteousness, and all these things will be given to you as well.”

Overall, I recommend “Imagine That” as an entertaining and fun family movie with some issues that can be used to spark family discussion.

So if you are looking for a heartwarming story about a daughter seeking to be the center of her Dad’s universe, and a grown man who, in coming to terms with what is really important in life, becomes a real father, then this is for you.

Positive
Positive—I enjoyed this sweet movie, starring the uniquely talented Eddie Murphy and the precocious little girl who plays his daughter. I was not totally comfortable with the theme of “magic” knowledge/information that the little girl gets from her imaginary friends which helps her father make business decisions. However, this plot gimick was not too offensive, as both father and daughter outgrow the magic, and the movie is otherwise delightful and charming, with some really funny moments.
My Ratings: Moral rating: Good / Moviemaking quality: 4½

Halyna Barannik, age 63 (USA)
Positive—This was a good movie. It lived up to it’s PG rating of course with some questionable stuff which I didn’t really notice. The lesson is simple. Parents have to remember what really matters… their children. This movie delivered the message quite clearly. Good job Nickelodeon, good job Hollywood.
My Ratings: Moral rating: Better than Average / Moviemaking quality: 3½

Alex, age 19 (USA)
Positive—I thought this was a great movie! One that dads could enjoy taking their little princesses to for a Father’s Day matinee. I really didn’t find anything too objectionable. I find one reviewers labeling of Red Bull as a “hallucinoginc drug” to be more than a little far fetched. While I certainly would not give a can of it to a child, it is hardly drugging a kiddie up. And as for the site’s reviewer, why is the father playing dress up w/ his daughter objectionable? In this day and age, so many fathers are absent in their childrens lives—so why is a loving father who enjoys playing w/ his little girl somehow “blurring gender lines”? Why must it be the mother to play dress up? Can a mother not play GI Joes w/ her little boy then? Taking something as innocent as a father humoring his little girl and turning it into an innuendo on the reviewer’s part is out of line to me.
My Ratings: Moral rating: Better than Average / Moviemaking quality: 4

Emm, age 29 (USA)
Positive—We took our 6 year old granddaughter to see this. We were slighly skeptical due to some negative comments. All of us laughed throughout the movie. It was a clean movie and fun for all ages. Sure a kid gets hyped up on Red Bull by his father who is certifiable. And Eddie Murphy goes a little nuts. This is a comedy… and imagination reigns supreme! Not “Where’s the beef?” but “What’s the beef?” Grandparents, parents and children alike can learn a great lesson from this movie… love isn’t things, power or fortune… it is TIME, it is fleeting and it flies away so very quickly. Seek forgiveness for past wrongs and forgive past wrongs—no one is perfect. Then spend large quantities of quality time with the ones you love… those moments can never be replaced or recaptured and with children they are so very precious!
My Ratings: Moral rating: Better than Average / Moviemaking quality: 5

SG & BG, age 63 (USA)
Positive—A truly HEART WARMING film…very sweet! I give it a BIG positive rating. I teared up during this one. I loved the characters and the story. I am a Christian homeschool mom of six, and I thought it appropriate for all ages, though my little ones under eight were a bit bored. My nine year old liked it and my teens loved it. It was a great message from a secular movie about how a dad finds out what really matters through the tender heart of his little girl. It just doesn’t get more Christian than that. Yes, God’s name was taken in vain twice in a row. I normally don’t see movies with that in them, but the message was clear…love and value your children while they are young.

The sweetest part of all was watching my husband wrestle my boys in the floor while the song from the credits played “All You Need Is Love.” Please don’t miss this film. There are so few like this one!
My Ratings: Moral rating: Better than Average / Moviemaking quality: 4½

Negative
Negative—Let me start off by saying THIS IS NOT A KIDS MOVIE!!! I am writing this very irritated with the fact that they Hollywood uses children in their trailers to lure parents into taking their children to what they think is a harmless movie because it’s all about a child. Well, let me tell you I was offended. It is much more about adult themed content than a light hearted children’s movie. In the first 20 minutes there is a lot of intense arguing and negative emotional energy that makes you wonder to yourself when is this movie going to get any better. Parents are using God’s name in vain very blatantly. The father (Eddie Murphy) has some serious emotional issues. And it introduces children into Indian mysticism and the taking psychotic drugs (red bull) to induce a supposedly spiritual encounter. NOT COOL. This movie should of had a PG-13 rating, and I would not have gone.
My Ratings: Moral rating: Offensive / Moviemaking quality: 2

Stoneworkz, age 42 (USA)
Comments from young people
Negative—Honestly, I do not believe this was a fun kid’s movie. I found most of the humor bland and some of it rude. I think this film would be better for adults to roll their eyes at. There were several “What the Hells?” throughout the film, and I was not impressed. I do not recommend for you to take young children to this film. There was a sequence where a 10 year old boy is given red bull to drink to perform an absurd Indian dance with an elaborate quilt over his body. I found this rather disturbing. The movie was not funny. My personal belief is that this movie should have been rated PG-13.
My Ratings: Moral rating: Offensive / Moviemaking quality: 4

Emily, age 11 (USA)
Comments from non-viewers
Negative—I was very disturbed by this movie. One of the reviewers seemed uncomfortable with the “magic” in the movie—for me that was putting it mildly. This story made light of a kid who seemed to be talking to “beings” that accompany her everywhere and “know” things that could help her father’s business. To me this seems demonic—and making it seem sweet and cute is all the more dangerous. I quit watching the movie after about 30 minutes, because of this, and it didn’t help that it was also fairly boring.