Underworld: Rise of the Lycans

for bloody violence and some sexuality. 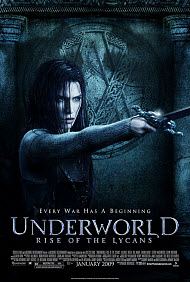 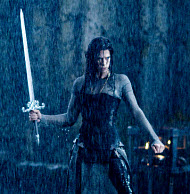 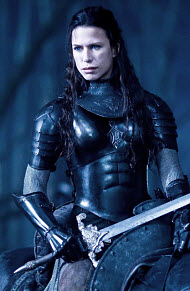 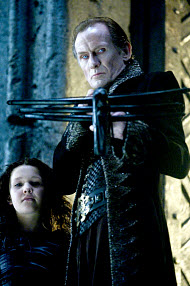 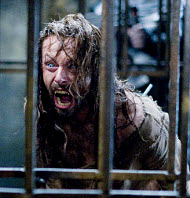 “Every war has a beginning.”

One of the most popular film franchises with younger audiences is “Underworld,” a saga that follows the continuing war between vampires and werewolves. “Rise of the Lycans” is the most recent addition and arguably the best film in the series.

For centuries, the Coven of Vampires has guarded humans from a race of deadly creatures known as Lycans. Unable to return to their human form and thus no more than mindless, lethal monsters, the battle against them rages until a human Lycan is born in captivity. Viktor (Bill Nighy), the reigning Elder of the Coven, spares the child’s life in the hope he will provide answers. Fast and strong, Lucian is used to create a new race of Lycans capable of transforming back and forth between wolf and human, and they become the daylight guardians of the vampires.

Many years later, Lucian (Michael Sheen) is the most-trusted and highly-respected Lycan warrior in Viktor’s army. He has fallen in love with and secretly married Viktor’s temperamental daughter Sonja (Rhona Mitra). Their love is unknown to all except the Coven historian, Tannis (Steven Mackintosh), who hopes to use this knowledge to further his political career. Against her father’s wishes, Sonja risks her life in accompanying a contingent of warriors sent to escort the human nobility into their midst for a renegotiation of terms. When the group is set on by hundreds of Lycans, Lucian disobeys his orders, escapes his shackles, and comes to her rescue. This insubordination forces Viktor to take him in hand, but his imprisonment and punishment creates dissent among the Lycans, who make a desperate bid for freedom.

Audiences familiar with the first two films know where this particular romance led, but the journey is as important as the destination: it is less a story about good and evil than one about consequences. Lucian is an enslaved revolutionist, and Viktor is a ruthless warlord, but it is impossible to root against either one. This is both a testament to the complexities of the characters and the actors, who put depth and emotion into their roles. Michael Sheen is best known for his straight-laced British characters and it is wonderful to see him as the Lycan equivalent of William Wallace. Bill Nighy could have portrayed Viktor as a cold, insensitive, unforgiving father, but approaches the material with surprising vulnerability. It’s hard not to feel for both of them—or respect the beauty of their performances.

If you saw the original, this might give you more fondness and compassion for the characters, but is also a reasonable introduction to the series. It is a prequel that fills out a lot of the loose storylines from the first film, but also stands alone.

While the film does not address the context of the sexual relationship between Sonja and Lucian, the original “Underworld” affirms that Sonja was his wife. That does not justify the fairly graphic, rather odd love scene, but does make it somewhat less morally offensive. Brief backside/side nudity is present on several other occasions, as Lycans cannot transform back into humans while clothed. There is a reasonable amount of gore between vampires and werewolves as they engage in battle. The most gruesome it gets is werewolves being impaled and/or sliced in half; vampires have their throats graphically cut. Blood spurts. Lucian is brutally flogged on two occasions. A character is impaled through his mouth; the sword penetrates the back of his head, and blood rushes out of his lips when it is pulled free. Viktor slaps his daughter and bashes a man’s head in against a pillar for daring to challenge his authority.

Christians are divided when it comes to the issue of supernatural creatures like vampires and werewolves. Some believe they are remnants of evil and should be avoided; others find them an entertaining and sometimes even thought-provoking pastime. Depending on your individual tastes and personal beliefs, this film may or may not be for you. I, as a fan of the genre, enjoyed it. Lies, betrayal, and keeping secrets are an underlining theme, but not without repercussions. If only Sonja and Lucian had been honest; if only Viktor had been forgiving of their indiscretion; if only the Lycans had not been slaves. It is a world in which brutality reigns, but love is not without poignancy, whether it is between tormented lovers struggling for liberty or a father who must make a terrible decision. It is hard to dislike any of these characters, for their mistakes are not so different from our own moral failures. Only in our world, the Blood truly is Life.

Positive
Positive—Undoubtedly an escapist’s creative outlet. A movie unabashedly made for guys by guys. “Underworld: Rise of the Lycans” rounds out the series by filling in the missing backstory from the first film. Rise does this through its precarious lycan/vampire relationships, ploys, and brawls set to a constant backdrop of Middle Earth’s very own Isengard.

Does this movie deliver on all aspects of quality cinema? Not exactly. What this edtion of Underworld lacks in tightly packed special effects, scenery, or whatever else it might come under censure for it makes up for with its characterizations—not to mention sometimes articulate dialogue, but also sheer brute force. I give “Rise of the Lycans” a 6, because it’s fun. Fun like the Mummy movies. Not as asinine as Fraser’s blockbusters are at times, but fun in that same vein of popcorn movie fantasy.
My Ratings: Moral rating: Offensive / Moviemaking quality: 3½

Jacob Keenum, age 22 (USA)
Positive—I thoroughly enjoyed this move. The tone of it is very dark, but not needlessly so. The entire movie is filmed with a filter, so that everything is bleached of its colors and replaced with blues and greys, with only very understated coloring other than that (with the exception of blood, which was always red). I was somewhat taken by surprise by the early sex scene. That being said, it was filmed quite conservatively and served its purpose well. There was no nudity. The violence was theatrical with immense amounts of blood flying. If you don’t mind “300” style gore, this movie won’t bother you. Aside from that, the movie was fantastic! The plot was typical, but well played out, and acting by the main characters was very well done. In my personal opinion, the last fight scene was worth ever penny of the 10 dollar admission fee =). Be advised, the movie is not for young children or those who object to strong violence or very scary looking werewolves.
My Ratings: Moral rating: Average / Moviemaking quality: 4

William, age 20 (Canada)
Positive—I really enjoyed this movie, and I thought the story was good. But, from a Christian perspective, it is an offensive film, because there is language and lots of blood. I didn’t like that there was a sex scene, even if you don’t see any nudity. I was touched by the love story in this movie though, and because I saw this movie before the original “Underworld,” I was not expecting it to end the way it did. After seeing this film, my husband and I rented Underworld, and it made much more sense. If you have not seen the first film before watching this one, it is a good idea to do so, just to know what is going on. Overall, it was a very entertaining film, and I am glad we saw it.
My Ratings: Moral rating: Offensive / Moviemaking quality: 4

Negative
Positive—I really enjoyed this movie, and I thought the story was good. But, from a Christian perspective, it is an offensive film, because there is language and lots of blood. I didn’t like that there was a sex scene, even if you don’t see any nudity. I was touched by the love story in this movie though, and because I saw this movie before the original Underworld, I was not expecting it to end the way it did. After seeing this film, my husband and I rented Underworld, and it made much more sense. If you have not seen the first film before watching this one, it is a good idea to do so, just to know what is going on. Overall, it was a very entertaining film, and I am glad we saw it.
My Ratings: Moral rating: Offensive / Moviemaking quality: 4

Sarah, age 25 (USA)
Comments from young people
Positive—I went to see this movie with one of my best friends for our “Girls Night Out.” My mom wasn’t thrilled that it was rated R, but she let me go anyway. I was personally just worried that this one would be as disappointing as the second one (bad special effects, plot got lost in all the violence, etc.). At the theater, it was a mob scene, because it was opening night.

However, once we sat down the movie captured our full attention. No one walked out or booed during the show. Me and my friend agreed afterward that it was definitely as good—if not better—than the first one. The story really comes across and isn’t overshadowed by the violence. It was easy to see the beautifully tragic love story unfolding between the two main characters, Sonja and Lucian. The special effects were on par with the first film and the set work was fantastic. Several times I wanted to cry for the “people” in it, and other times the whole audience picked up the subtle jokes and punch lines. My friend and I left feeling very happy and pleased. (***MAJOR SPOILER WARNING!***) Although, the Sonja dies in the end, the movie still provides a measure of female empowerment and courage, something many girls need today.

The only things other Christians might find offensive in it are as follows: the concept of vampires and werewolves, the (um…) sexual content (one lengthy scene with Sonja and Lucian) (but nothing nearly as vulgar as can be found in the second movie), and Vicktor’s nasty treatment of pretty much every other character.

I’m glad I went to see this movie, and I recommend it to all the readers on this site. That is, all readers over the age of 15 (Please! don’t take your eight year old to see this and then come here to complain that it was crude and inappropriate… it’s rated “R” for a reason!). Live, Love, Laugh Everyone!
My Ratings: Moral rating: Good / Moviemaking quality: 4