for strong violence/gore and some language 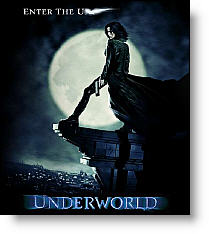 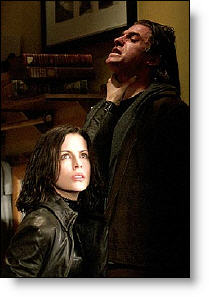 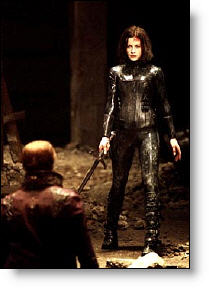 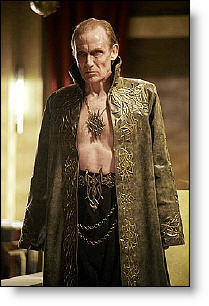 When did EVIL first enter the world, according to the Bible? Answer

How did BAD THINGS come about in our world? Answer

What happens when you mix vampires and werewolves? Can the conflict be good versus evil? Is it evil versus evil? And if two wrongs don’t make a right, can two evils make a good? The outcome of this vampire-werewolf recipe is explored in more ways than one in the sci-fi action film “Underworld”.

Directing his first feature film, Len Wiseman has set “Underworld” in a dark, non-descript European city and fantasizes an antiquated conflict of vampires and werewolves. The battle employs gun shoot-outs, martial arts, fighting with medieval weapons and flesh biting. From beginning to end, the movie is drenched in blood.

Strong, sleek, vampire Selene (Kate Beckinsale) finds out their archenemies, the “Lycan” (werewolves) are hunting a human. Against her leader’s wishes Selene continues to investigate and discovers why. In the process, Selene inadvertently “falls” for the human, Michael (Scott Speedman), who is bitten by a Lycan and will soon transform into a werewolf. Selene continues to assist Michael, claiming it is only to help the vampires, but their relationship provides not only a love story, but the beginning of a new breed of monster.

The focus and attention paid to blood in this movie and the creation of a new kind of man provides some allusions to Christ. In Ephesians 2:13-15, Paul explains that we have been brought near to God by the blood of Christ. Furthermore, Christ “is our peace, who has made the two one and has destroyed the barrier, the dividing wall of hostility, by abolishing in his flesh the law with its commandments and regulations. His purpose was to create one new man out of the two, thus making peace.” These connections don’t seem to be intended, but provoke some thought to things more joyful and hopeful.

The film is very reminiscent of recent blockbuster films such as “The Lord of the Rings” with the introductory female voice-over narration, and “The Matrix” with the lead woman in sleek, black leather fighting her enemy and finding and falling in love with the “one.” The less interesting, slow beginning of the film brings more focus to some overdone performances and the struggle some actors seemed to have with their fake vampire teeth. However, the story does provide some interesting twists and turns throughout and develops its legend, like “Crouching Tiger, Hidden Dragon” does for martial art films.

The blood and gore can really turn the audience off to this kind of film. Overall, it is a dark and heavy film that seems, at times, to take itself too seriously. Most of the humor at our audience was the shock people had by the outrageous violence.

Positive
Positive—A mildly entertaining fantasy, and nothing more—it’s worthwhile viewing for fans of vampire and werewolf movies. It’s rated R, so obviously kids should not be seeing this movie. There’s nothing in this movie that (IMHO) presents a significant challenge to an evangelical Christian point of view.
My Ratings: [Better than Average/2]

Robert Harrison, age 39
Positive—I very much enjoyed Underworld. It focuses almost entirely on action, and, although it tries to focus on the story, the story only provides a backdrop (and a solid one, at that), for gun-fights and martial arts. Other than swearing, there wasn’t really anything objectionable in the film (remember, of course, the film IS about vampires and werewolves). The much-talked-about “violence” was never gory or disgusting, but barely passable to draw you into the story.
My Ratings: [Better than Average/4]

Nathan Gundlach, age 19
Comments from young people
Negative—Though I did not see the entire movie, I was still shocked by what I did watch. In plain terms, Underworld is sickening, violent, and has absolutely no biblical value. Blood permeates the movie, and the plot wasn’t even interesting. The hour that I spent watching it was a total waste of time, and left me feeling guilty for even seeing any of it at all. There are plenty of other movies which have at least some good value to them, but this is definitely not one of them!
My Ratings: [Very Offensive/4]

Danielle Day, age 17
Neutral—No sex, and moderate language—the main problem with “Underworld” is its violence and needless gore, as well as the fact that it does take itself a little too seriously and at times runs a little unevenly. Still, the plot twist about 2/3 into the film does much to redeem it in that respect; I also thought that the performances of the main actors were not that bad. Its a shame they didn’t develop the battle between good and evil more, as well as the problems I have mentioned. because they detract from what could have been a rather good storyline. I will say that the movie succeeded in making me care about the two main characters. Perhaps if it hadn’t relied so heavily on gore and darkness to shock viewers, its effect would have been better. …It did have the makings of a good message about the effects of war on both sides. Shame it didn’t develop its positive aspects a little further.
My Ratings: [Very Offensive/3]

Holly DeMuth, age 17
Positive—I actually liked this movie a lot. Underworld has some sleek visuals and an interesting plot (if you can handle it) I was surprised that it didn’t take full advantage of the R-rating. …Their was no sexual material except for Erika’s and Amelia’s cleavage, which isn’t a big deal. …only 2 really gory happenings, Singe getting whacked across the face, his face torn and bleeding horribly and when Selene slices through Viktor’s head. I’m very glad that there wasn’t a lot of language, but the taking of the Lord’s name in vain had no point. And just for fun, The vampiric book that Selene reads is actually a Jewish Psalm book. Thanks for giving your moral opinion on all of these movies.
My Ratings: [Average/4]

Brandon Dehler, age 13
Movie Critics
…There isn’t an instant of warmth or wit. …Every few seconds for two full hours, ‘Underworld’ pumps loud sound blasts at the audience to cue them where the exciting parts are meant to be.

Ed Blank, Tribune-Review
…This is a movie so paltry in its characters and shallow in its story that the war seems to exist primarily to provide graphic visuals…

Roger Ebert, Chicago Sun-Times
…A noisy, tiresome affair that can’t manage one moment of wit or real tension, …Visually, ‘Underworld’ simply mimics every other ‘Matrix’-wannabe flick of the past few years…

Tom Long, Detroit News
…despite the …filmed-in-Budapest atmosphere …stylized production design and creature designs… that favor prosthetics over CGI excess, ‘Underworld’ keeps getting held back by an uncertain pace and a too-tight-lipped tone that elicits a few inadvertent snickers…

ScreenIt!
…Due to severe violence, objectionable language and demonic/occult references, Preview recommends that you stay away from the Underworld…