for strong pervasive violence and language, and some sexual content 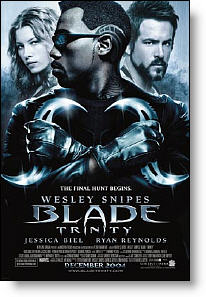 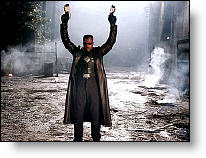 Here’s what the distributor says about their film: “For years, Blade has fought against the vampires in the cover of night, with the world above unaware of the brutal ongoing war. But now, after falling into the crosshairs of the FBI, he is forced out into the daylight where he is driven to join forces with a clan of human vampire hunters he never knew existed—The Nightstalkers. Together with Abigail (Jessica Biel) and Hannibal (Ryan Reynolds), two deftly trained Nightstalkers, Blade follows a trail of blood to an ancient creature that is hunting him… the original vampire, Dracula.”

This movie is the third in a series of films based on a comic book character. He is a hybrid of a human being and a vampire. The basic premise is that Blade, played again by Wesley Snipes, is a lonely, immortal, and unstoppable force against the rising evil tide of vampires. This installment of the story takes place in a bleak urban setting slightly in the future.

If the viewer has not seen the other two movies, I believe that it would be difficult to understand “Blade: Trinity” or get involved with the story. Blade, as well as all the other characters, have almost no character development. Worse, there is also very little suspense, humor, or storyline.

I found it impossible to get interested in the film, or care about the characters, even though I did in the first two “Blade” movies. There were many inconsistencies in the motivations of the characters and in the story line. Frankly, I could hardly wait until it was over. I especially disliked the scenes with Posey Parker, who plays the female head vampire. They were particularly distasteful and overacted.

In the first minute, there is a crude word and an obscene gesture. Unfortunately, it only goes downhill from there. If I had not promised to review this movie, I would have left after the first twenty minutes. This film is an endless string of graphic violence, obscenity, cruelty, and exploitation of death. The use the movie makes of a tiny baby, a little child, and a small dog is especially appalling. The filthy language refers to most, if not all of the sexual perversions known to man. The way the vampires are killed, as well as the many “bad” humans, is horrific and unrelenting. The body count of both humans and vampires must be in the hundreds in this sad and pointless gore festival.

The violence, extreme cruelty, torture, and blood is constant, as is the destruction. “Blade: Trinity” is one of the most violent and obscene R-rated movies I have ever seen, or could imagine. In this reviewer’s opinion, it should have been rated NC-17. This is not something children or teens should be allowed to view. (I saw at least two children under 6 at the public showing I attended.)

There is no nudity (other than bare mid-drifts) or sex in the movie, but the language is off the charts for filth and repetition of the most offensive phrases and words. The language was especially degrading to women and overall very mean-spirited.

In summary, this movie was a total waste of time—nothing remotely entertaining or worthwhile. “Trinity: Blade” was a big disappointment after the other two movies which I thought had well written plots and somewhat believable characters.

Read Christian Spotlight reviews of the previous films in this series: Blade and Blade II

Negative—Where do I begin? In a nutshell this 3rd installment of the Blade series is a severe disappointment. Seeing how the previous movies continued to build both in plot and overall scope… Blade Trinity takes a reverse leap and stumbles back to a small and immature perspective.

The ruling body of vampires is apparently reduced to nothing more than rave kids, punks and 30 something x-gen’s that have one after another smart mouth comment or stupid one-liner jokes to throw in. Where’s the drama and seriousness that made Blade1 and 2 not just great action flicks but excellent stories as well? Blade3 has nothing in the way of storytelling, good acting or even impressive action. A good description would be “low budget.”

This movie is supposed to represent the “end game.” the “final solution.” Well, you’d think with the return of an ancient figure like Dracula would be intense right? Maybe you would be expecting a character to rival the menacing nature of the Overlord from Blade2? Or perhaps you might be thinking about the appearance of Victor from Underworld? Well, sorry kids. Dracula is just another 30-something moron who’s first adaptation to modern culture is to dress fashionably with leather pants and an open shirt.

I could go on and on about the garbage acting, stale choreography, excessive stupid jokes, poor character development, choppy cinematography, lame costume design, senseless storyline… but just understand this if anything. you are wasting your money if you don’t wait until “Blade 3” makes a showing at your local $1 theater. It’s not even worth a rental. A free library check-out would be perfect.
My Ratings: [Very Offensive/1½]

CK, age 30
Neutral—…yes, this movie I think had the most language of all 3 films combined, which was unfortunate. The scenes with Posey Parker were terribly written, as well as badly acted. The same could be said for her “gang.” The storyline was okay, weak in some areas. Also, Ryan Reynolds was both the comedy relief and the source for the most crude language. Which was also sad. But “one of the most violent and obscene R-rated movies I have ever seen, or could imagine”?…That’s stretching a bit, in my opinion. The action was the same as in the previous 2. Overall, unfortunately I cannot recommend this film as highly as the previous 2, great action scenes, terrible language. Wait till it comes out on TV.
My Ratings: [Very Offensive/3]

Andrew Lopez, age 22
Positive—…I’m Christian and a very strong one, but I wasn’t offended by this movie. It was very violent but not offensive, It is very stylized.
My Ratings: [Extremely Offensive/5]

Brandon Dehler
Negative[Did not watch this film] I am a born again, Spirit filled Christian. I try to base my movie viewing on what my Precious Lord and Saviour JESUS CHRIST would view with me. I do not understand how “CHRISTIANS” can just watch ANYTHING they please and say it is “ONLY” entertainment… and DISREGARD the FACT that JESUS is pure and HOLY and wants us to be LIKE HIM!!! We must love what HE loves and died for which is Humanity… and HATE the evil that He came to destroy… This movie subject is not one He would promote… where is your DISCERNMENT??? God bless you… and open your Spiritual Eyes!

Lorraine, age 50
Positive—While everything stated in opposition to this film is true, I found it neither offensive nor badly produced. Blade isn’t about a great storyline—it’s about watching vampires explode in a shower of sparks, while killed in various creative ways by our hero, or one of his sidekicks. This was the least violent of the three, and as for the “use the movie makes…” A baby is dangled over the edge of a roof (but not injured), a small child is kidnapped and threatened (but not tortured, killed, or turned), and a chihuahua is part vampire, part dog. Yes, this film had the usual swearing—when I watched it, I was expecting that. It’s pretty much for die-hard action/vampire/body count fans only, but being all of the above… I quite enjoyed it.
My Ratings: [Average/4]

Nathan Gundlach, age 20
Comments from young people
Negative—Although this movie is easily not the most offensive movie I have ever seen, imagined, or heard of… it is nevertheless shocking to both my moral standing and my intellect. The fight scenes were poorly choreographed, painfully obviously sped-up, and unbelievable. The language was atrocious (probably some of the worst I have ever heard in my life… The shallow plot and useless, underdeveloped characters don’t even partially make it worth sitting through. I enjoyed the first movie although I acknowledge some of its darker messages. At least the fight scenes were excellent. Blade: Trinity has absolutely nothing to offer. I’m just glad that I work part-time at a movie theatre and got to see it for free; even so, I think that the cost of the time spent viewing it was much too high. It’s even worse than Resident Evil: Apocalypse, although admittedly not much.
My Ratings: [Extremely Offensive/1]