for strong violence and gore, and for some language. 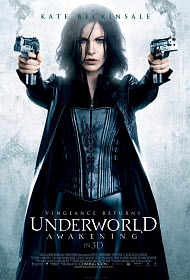 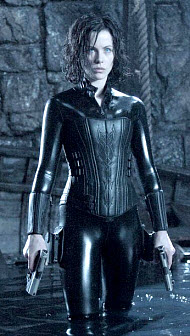 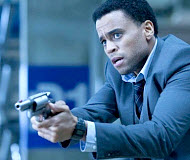 wolf in the Bible

Even though the critics are not fond of this franchise, it’s apparent from its repeated box office success that audiences love it. And even though it is excessively violent, at times, it’s not hard to see why. No other big-screen blockbuster franchise in recent years is this cool.

Twelve years have passed since the Vampire Death Dealer Selene (Kate Beckinsale) last prowled the streets. Much has changed in the intervening time since… and she remembers none of it, since her last memory is watching a burst of ultraviolet light blast her and her hybrid-lover Michael (Scott Speedman) apart. Her awakening in a laboratory and subsequent escape from a high-tech testing facility has coincided with the flight of another prisoner, one they want even more than their desire to reclaim Selene—“Patient #2.” Not knowing what her association to this patient is other than that they seem to be sharing visual flashes from one another’s perspectives, Selene is shocked to discover her fellow former prisoner is an eleven year old child.

“Eve” (India Eisley) reveals extraordinary abilities, but fails to display the rapid healing of a normal Vampire. Fearing for the child’s life and searching for answers to her parentage, Selene is forced to take her into hiding in one of the few remaining covens. But its leader (Charles Dance) is reluctant to conceal them for long, and the subsequent revelations and their consequences will change all their lives forever.

“Underworld” is known for being stylish, futuristic, and extremely violent, which is one reason many Christian groups shun it (in addition to its themes of Vampires and werewolves). These are gritty, dark Vampire stories, nothing like the sunlit, sparkling world that Stephanie Meyer creates in her preteen Twilight saga. Parents of teens who love Bella and Edward may want to take a second look before upgrading their daughters to this franchise, because while the heroine is much more self-sufficient than Bella and isn’t interested in sacrificing her soul for love (she’s already a Vampire), she also brings a hefty amount of stylized action violence with her.

Fortunately, there is rarely much bad language. This film contains three f-words, h*ll (1), and a couple uses of s**t, and no sensuality in this installment, other than some obscured partial nudity in a few frames. But there is a fair amount of gore. Lycans are hit with bullets, sprayed with silver grenades, and, in a few instances, torn in half or have their faces blown off. One explodes from the inside out, drenching a corridor in carnage. The nastiest of it comes when Eve rips out a Lycan’s throat, and we see the mangled, gaping hole in his neck as he morphs back into a human (as all Lycans do when dying). Selene also plunges her hand into a Vampire’s chest, and jump-starts his heart (we see an internal view). What might prove a bit troubling is that much of the violence comes from (or is directed at) a creature that looks like a young girl. Even though we know Eve is going to get up unharmed, it still is cringe-inducing to watch.

On a purely cinematic level, this movie is visually gorgeous and has some stunning moments of pure action that parallel jaw-dropping iconic moments from earlier in the series (remember Selene dropping through the floor? This time an elevator drops around her!). It suffers from being too short (a mere 90 minutes), but the script is stronger than the earlier installments and having Selene the focus makes the audience comfortable. We know how she works, we have rooted for her in the past, and we believe she will succeed against all odds.

Putting aside the violence, we are left to ponder what a movie like “Underworld” has to say to a Christian audience. There is the good and the bad; the good is that, in this film, Selene does everything in her power to protect Eve from harm, much in the same way she protected Michael. Her desire to defend those she loves is admirable and overrules her concern for her own safety. It’s also relatively easy to find symbolism in the series and in the Vampires as the ultimate outcasts, misunderstood, feared, and hated by society, something that we as Christians can understand. But others may find that indulging and finding entertainment in such violence encourages the worst in our human nature and can argue that Vampires, originally created as symbolic of a life without God in a form of an antichrist, should not be given permission to enter our homes. Each is a sound argument that can trump “but these movies are so cool” any day of the week.

So what is a Christian to do when faced with this franchise and, in particular, this most recent installment? Well, it’s more violent than the first film, but much less sexual than the second and third. If you enjoyed earlier installments, it’s worth the price of a movie ticket. But if you have any convictions at all about avoiding it, stay away.

Positive
Positive—Me and a few of my friends went and saw this the other night. I had seen the first “Underworld,” so I sorta knew what to expect on the movie quality and overall film quality. I was not disappointed… The soundtrack was good, action and stunts were, and the fight scenes lived up to the “Underworld” franchise.

A warning to parents with young kids thinking of taking their kids (as there were a few younger kids there watching it, too), it has a lot of violence and “scary images” It being a werewolf and vampire it had it bloody scenes and ones where people were getting attacked my the vampires and such. So that being said its definitely a “grown up” movie. It had no “sex” scenes or any “iffy” things going on. The language, from what I can remember, was mature and brief, but not overly done.

It had some nice touching moments between the mother and daughter, and it had a good family feel with the characters and loyalty, as well as a sticking up for what you believe and helping others.
My Ratings: Moral rating: Offensive / Moviemaking quality: 4

Toby K, age 25 (USA)
Positive—I saw the movie exactly a week ago and got a ride out of it just like the first 2. As the fourth installment to a distinguished series, this movie doesn’t disappoint, but that doesn’t mean it has no holes. Although Kate Beckinsale was evidently absent from the 3rd series, they were able to justify it by showing the historical feud where the 2 species started. I still think Kate Beckinsale fits Selene’s character perfectly.

Notably absent from “Awakening” is co-star Scott Speedman, who played opposite Kate as the hybrid creature that served as a catalyst for the whole series. This might be a small thing, but it created a hole in the script that made the ending a little hollow. Without giving anything up, they could’ve done a better job in an already good script, but missed that target in the end, I think, by not having Michael’s character.

Instead, we get a glimpse of a new member of the family who also exhibits hybrid features. Anyway, the movie is very impressive with tons of action and a very interesting storyline.

Of course, the concept of vampires and werewolves have always fascinated movie producers; we have thousands of vampire and werewolf films, but Underworld holds up its own with its unique combination of technology, elegance and martial arts.

A good moral of the movie is the dedication of protecting your family. This is exemplified by Selene’s willingness to get out of her way and even risk her life, not only for family, but also for friends. Jesus showed us the greatest meaning of love for family and friends by giving His life for us in such a way that does not depend on how He was treated.

“Underworld: Awakening” is based on this premise and is definitely grounded on that line. The original Underworld was based on principle, the second was love for your partner which extended to the third. It is given that Selene and Michael are not married (I don’t think there’s such a thing as one to begin with) the fact that they were portrayed as couples still highlights that point. Awakening is a continuation of that family affair.

Everything was well placed, I just wish that Michael was included as a significant character in this episode. If you can overlook that then hold on to your seats, because this one doesn’t disappoint. Just don’t bring kids younger than 15, but this is just from my point of view.
My Ratings: Moral rating: Offensive / Moviemaking quality: 4½

Tades Jacob, age 44 (USA)
Positive—I’m a fan of the Underworld series, and personally, this one is by far my favorite. I’ve already seen it twice in theaters. The moviemaking quality was excellent: the cinematography, the soundtrack, and, of course, Kate Beckinsale back as Selene. The fight sequences completely blew me away—the choreography was so much better than the other three movies, and Selene’s abilities are even more impressive this time around.

I really liked the mother-daughter relationship in this one. Selene’s not just seeking vengeance; she’s fighting to protect her daughter, and I really liked that aspect. As far as objectionable content, it IS rated R, so there’s a lot of blood and violence (it’s about vampires and werewolves, after all), but no sex scenes. There was about four swear words, two being the f-word, but that’s pretty mild compared to what you hear even in some PG-13 movies, and much less than was in the previous Underworld films. It’s definitely not a movie for kids, but I really loved it. If you do go see it, I definitely recommend watching it in 3D or IMAX.
My Ratings: Moral rating: Offensive / Moviemaking quality: 4½