for violence/terror, some sexuality and substance abuse 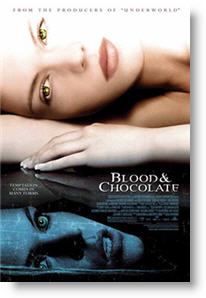 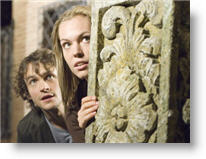 Eternal life—What does the Bible say about it? Answer

“Temptation comes in many forms.”

“Blood and Chocolate” is the story of a American born young lady working at chocolate shop in Romania, but at night she’s not as ordinary as her job makes her seem. Vivian (Agnes Bruckner) is haunted by her past and is bound to family obligations. But when she meets Aiden (Hugh Dancy) a graphic novelist who’s in town doing research for his latest book, everything changes. Vivian must choose between family loyalty and following her heart.

This film was adapted from Annette Curtis Klause’s young adult novel of the same name and is from the producers of “Underworld.”

“Blood and Chocolate” deals with several moral issues such as loyalty, honor, respect, love, hate and forgiveness. Vivian is faced with some tough choices when it comes to obeying the laws of her family vs. following her own moral compass. But while she makes her all decisions, there are several times when violence and the threat of violence is used to heighten the stakes of her moral dilemmas. Vulgarity is used throughout the movie and there are some scenes dealing with sex that you definitely wouldn’t want to explain to your 13-year-old.

With any horror/fantasy movie there are most likely going to be spiritual viewpoints that go against Christian principles. “Blood and Chocolate” is no exception. There are several moments with warped spirituality in reference to life after death and eternity. But there are some good redeeming moments when Biblical principles are being displayed in the characters actions toward one another.

At its core “Blood and Chocolate” is a love story. It’s like “Underworld,” but with less violence, a lighter tone and is geared more for teens. Fans of “Underworld” will appreciate its effort, but will by every means walk away knowing that it is not “Underworld” because it lacks the filmmaking quality and freshness that “Underworld” brought to the folklore tale of werewolves and vampires.

If your teen is a big fan of these type of tales, then this movie could be a good springboard for you to share a moment in some beneficial discussion about eternal life, love and responsibilities. But be prepared to shake off the spiritually unsound theologies given.

“Blood and Chocolate” is a sweet blend of love and folklore that you can sink your teeth into, but remember not to over-indulge.

Here’s what the distributor says about their film: “Ten years ago, in the remote mountains of Colorado, a young girl watched helplessly as her family was murdered by a pack of angry men for the secret they carried in their blood. She survived by running into the woods, and changing into something the hunters could never find—a wolf. Now, though she lives half a world away, Vivian Gandillon is still running. Living in relative safety in Bucharest, Vivian spends her days working at a chocolate shop and nights trawling the city’s underground clubs, fending off the reckless antics of her cousin Rafe and his gang of delinquents he calls “The Five.” Aiden Galvin is an artist researching Bucharest’s ancient art and relics for his next graphic novel based on the mythology of the loup garoux—shapeshifters whose power to change effortlessly into the forms of both human and wolf was once considered holy among men.

Wrestling demons of his own, Aiden hopes to explore the inner lives of these outsiders that he believes were persecuted to extinction—labeled monsters, murderers, werewolves. What he doesn’t know is that the loup garoux are not only very real, they’re far from extinct. During a chance encounter in an abandoned church celebrating the loup garoux, Aiden unknowingly comes face-to-face with the real thing, Vivian. Others may have secrets but none as extraordinary as hers, for Vivian is among the last of her kind, leading a tenuous existence under the protection and control of Gabriel, the powerful and enigmatic leader of one of the last packs of loup garoux on Earth.

After their brief exchange in the church, Aiden can’t get Vivian out of his mind, nor can she forget him. He pursues her until she relents and begins to see him, but she can’t bring herself to tell him the truth—and lives in fear of showing him what she really is. And what’s worse: her future, and who she falls in love with, is already predetermined. To keep their kind from being hunted to extinction, Gabriel holds them to strict laws. One is that he must take a new bride every seven years, and Vivian has been prophesied to be his next.

“Blood and Chocolate” stars Agnes Bruckner (“24”), Hugh Dancy (“Basic Instinct 2”), and Olivier Martinez (“Taking Lives”) and is directed by German independent film director Katja von Garnier (“Bandits”). The story takes place in modern day Bucharest and tells the tale of nineteen year old Vivian Gandillon (Bruckner), who has spent her life on the run from the truth… that she is a werewolf. When her affections for a visiting American artist threaten to expose her family’s secret society, she must choose between her love for an outsider and betraying the secret vows of her family.”

Negative
Negative—Hi my comments are based on the fact that I read the book “Blood and Chocolate” in 2001 at the age of 13. It was the first book that actually gave me the fantasy reading I needed to stimulate an unused creative imagination. Wich opend a whole new world of loup garou’s, Love and What If’s. I have never commented on anything before, I have never felt so hurt by something that I felt I should say something? I used “Blood and Chocolate” for book reports, english topics, history and even my music was inspired off this book. I was so excited to hear someone was making it into a film…

My first thoughts after watching the movie were… Apart from holding back my tears, I was hopeing EVERYONE would read “Blood and Chocolate” The book! If not this movie will ruin your idea of loup garou’s forever! This movie is 100% original story line if you don’t watch Underworld… The best part is it’s so original that NOTHING in it is like the book! Who needs a mum? Lets kill her off… loup garou’s are nice… not anymore! The only similarities between the movie and the book are the characters amazingly have their names still and also the title of the book is still… “Blood and Choolate” even though it should really be something like 'Wolf Girl, The Pack, SILVER or just OVERWORLD'

Vivian, Aiden, Gabriel and even Rafe never deserved to be shamed like that! The whole story was just like UNDERWORLD and seemed only to have switched to Werewolf against Werewolf instead of Vampire against Werewolf! So “Blood and Chocolate” = 'We need money so… What if we put it from the werewolf perspective? Title names and underworld reversed… There we have it!' I just hope they don’t slaughter someones book in their next film! Please read “Blood and Chocolate” the book. It might inspire you as it did me! Don’t judge by the movie…
My Ratings: Moral rating: Extremely Offensive / Moviemaking quality: 3½