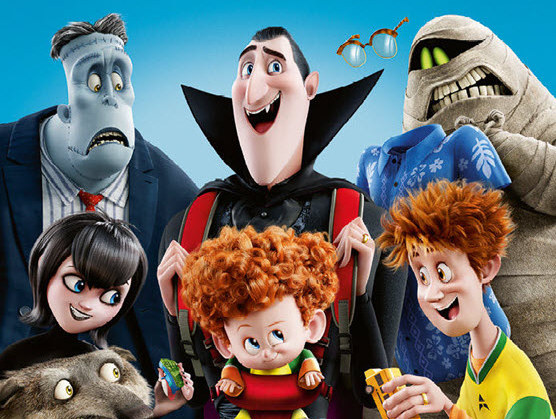 for some scary images, action and rude humor. 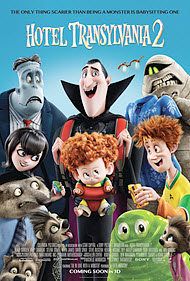 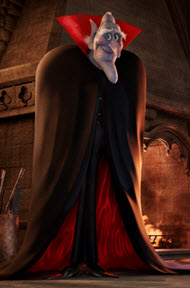 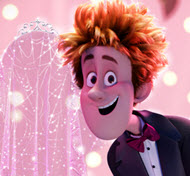 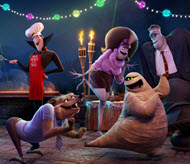 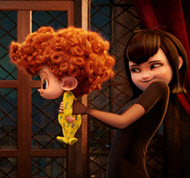 importance of accepting and loving children as they are

Our story takes place right where the first movie left off. Dracula (Adam Sandler), his daughter Mavis (Selena Gomez), and her human-husband Johnny (Andy Samberg) all now peacefully coincide at Hotel Transylvania (which is, of course, now open to humans!).

A year passes, and Mavis and Johnny tell Dracula that she is having a baby. Their son Dennis is later born.

But, there’s a big problem. Dracula notices that Dennis is not getting his fangs, which means Dennis might be a human and not a monster (or in this case a vampire). At first, Dracula thinks that Dennis is just a late bloomer.

4 years pass, and Dennis still doesn’t have his fangs. Now Dracula is concerned. On top of that, Mavis tells her father she thinks Dennis might remain human and believes Dennis should be raised in a community with other humans. Dracula is determined to bring the monster out in Dennis. It’s a story about heart, family, and a few wacky monsters thrown in for fun…

Initially I was happy about a second “Hotel Transylvania.” The first one was witty and humorous for both children AND adults. Sure, the story was about monsters and, rest assured, I do not promote nor accept the concept of Halloween, but the movie had enough heart and laughter that I had a pleasant evening.

“Hotel Transylvania 2” though? It’s hard to say, really. While certainly Sandler (who also produced this film) and Tartakovsky do their best to revive the overall feel that the first film had, essentially, I feel this sequel fell flat. The movie is humorous, to a point, but for me that wasn’t enough.

The good? The animation. Sony has some of the best CGI programming in the business, second to perhaps DreamWorks and Pixar. The plot, though, moved slowly, and I couldn’t help but ask myself if this sequel would have served a greater purpose as a “made for television” film that could have easily resolved all situations in less than a hour.

Violence: Most of the violence in this film is in the form of slapstick humor. The Blob is hit by a bunch of branches and falls off a cliff (of course, he’s not hurt), and some characters get hit in the crotch. A zombie falls off some steps into a big hole. There’s also a slightly prolonged action sequence involving Dracula’s family. Additionally, one supporting character, Winnie, is smacked onto the ground. One scene involves Frankenstein catching fire and running into other buildings, burning them down. In an attempt to make Dennis fly, Dracula takes him to the top of a tall tower and throws him off (when he realizes Dennis can’t fly, he saves him).

Sexual Content: A comment is made about someone’s “boobies,” the abominable snowman is seen in his underwear, and the Mummy’s girlfriend is very, umm, curvaceous.

In the end, Dracula comes to the realization that whether or not his grandson is a monster, he loves him for who he is, not what he isn’t.

Similarly, for us, God created us in HIS image. Because his love for us is pure, He has plans for us. As God said to Jeremiah,

Before I formed you in the womb I knew you… –Jeremiah 1:5

…even the very hairs of your head are all numbered… —Luke 12:7

“I praise you, for I am fearfully and wonderfully made. Wonderful are your works; my soul is very well.” —Psalm 139:14

The cliché, “If it ain’t broke, don’t fix it,” might very well ring true with “Hotel Tranyslvania 2.” While the film contains the same amount of humor as the first (perhaps this is generous), it does not have the same amount of heart, and the pacing is too slow. I personally don’t recommend this sequel, not simply because of content and the promotion of Halloween, but because it does not live up to the prestige of its predecessor. Sorry, Sony.

Neutral
Neutral—“Hotel Transylvania 2” ends up being a movie with the redeeming theme of love and acceptance for those who are different from ourselves. This is a GOOD thing.

Now for the BAD: there are some gory parts (extraction of a beating heart) that may be over-the-top for the little ones (below age 10). The Frankenstein, Wolfman, and Mummy-type characters are, in my mind, in the category of “fantasy,” not overtly evil in this movie. The ideas that are troublesome from a Christian perspective include demonic wording like where the dad, Drac, calls his grandson, “My little devil,” in a “cute little way” designed to de-sensitize Christians to the horrible REALITY of Satan and his deadly plans that he has for each individual. We understand that the producers and directors of this movie, to the best of our knowledge, are not Christian believers. One of the worst things that can happen in a movie is the portrayal as the devil as an “old snaggletooth” type character who’s make-believe or not really at work doing evil in our world.

Truth is that WE ARE INSTRUCTED TO: “Be vigilant; because your adversary the devil walks about like a roaring lion, seeking whom he may devour” (1 Pet. 5:8), AND “The thief does not come except to steal, and to kill, and to destroy…” (John 10:10.)

FOLKS, the devil is very real and very intentional in his efforts to minimize his “reality” in our minds through a process of gradualism so that we will become de-sensitized to his person and his works. NO, WE ARE NOT fearful of the devil, as he has no authority in the lives or homes of praying, Bible-reading, worshiping born-again Christians, but YES WE ARE PRAYERFUL and VIGILANT, WISE to the active plan of the enemy who is working to deceive, discourage, divide, and distract Christians, IF we’re not aware of the enemy’s devices.

See this mildly-entertaining movie, if you’d like, with kids 10+, but WORSHIP when you come home, PRAY together, TALK ABOUT the “good and evil” parts of the movie and our need to be AWAKE to the devil’s real activities in the world, and “ARMOR UP” with the full armor of God everyday (Eph. 6).
My Ratings: Moral rating: Average / Moviemaking quality: 3

Mark Matta, age 57 (USA)
Negative
Negative—This movie was great until the last 30, or so, minutes. It began when Dracula’s dad receives an invitation at his home address: 666 ________. Then it shows his swarms of evil, flying monsters who are ready to destroy all humans. The movie also pulls a nearly direct quote from the Bible, about Satan himself! Did we watch the same movie??? I was disgusted.
My Ratings: Moral rating: Very Offensive / Moviemaking quality: 3

Laura, age 37 (USA)
Negative—Okay, I’m a big fan of the first “Hotel Transylvania,” so you can probably imagine my excitement and then sudden disappointment when I viewed this one. It’s like when you love minions from “Despicable Me” and you watch the “Minions” movie, but find that the movie wasn’t funny enough because all the funny parts were in trailer—which was a lot like what happened to HT2. This entire movie was rushed, the funny parts were stupid and in for a short moment to squeeze into one scene.

There was a Gay or New Age feeling guy in there at Vamp camp which made the movie more awkward and weird. The movie was very claustrophobic, with all the scenes and rushiness all packed in, it made me hate the movie. Not to mention, there was too much technology in the movie which showed Facebook, smart phones, TVs, etc.—the whole movie lacked imagination.

I couldn’t stand it, and I was so glad when it was over, because the ending was cheesy, as well. And, seriously, a toddler vampire liking a girl wolf? Gross. I’m a kid at heart and love watching cartoons, but this was a disappointment. Best to rent when it comes out on DVD than waste your money.
My Ratings: Moral rating: Offensive / Moviemaking quality: 3½

Anna, age 23 (USA)
Negative—On two occasions the numbers 666 is displayed in the movie, once on the cell phone and another time on a letter addressed to Vlad. Children who watch the movie see this and believe that because it is displayed in a children’s movie, then it is not really any harm when they come across it again in their life. Why would the mark of the beast be displayed in a movie attracting children! It is a way of mind-controlling our younger generation to accept it as innocent as a joke.
My Ratings: Moral rating: Offensive / Moviemaking quality: 3½

Carolinerose, age 25 (Australia)
Negative—It was full of occultic and dark elements which is to be expected from a movie like this, but a scene where the favourite monster character is possessed is not my idea of entertainment. Stay away! Do not show this movie to your children.
My Ratings: Moral rating: Extremely Offensive / Moviemaking quality: 3