for sequences of intense fantasy action and violence throughout. 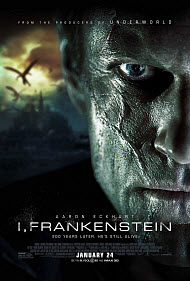 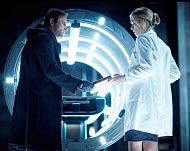 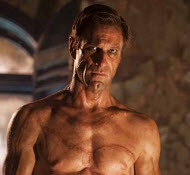 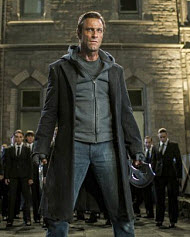 true life demons in the Bible

What is one of Satan’s most successful strategies in dealing with followers of Christ? Answer

What is an archangel? And who is Michael?

The Bible says that Satan was cast out of Heaven. He managed to assemble legions of other rebellious angels (demons), and waging war against God. This war will be at its greatest at the end of The Great Tribulation (just prior to the Millennium) and will climax at the end of the Millennium.

about the original novel Frankenstein; or, The Modern Prometheus (1818)—and its liberal author Mary Shelley

“200 years later, he’s still alive. In the battle between good and evil, an immortal holds the key.”

“I, Frankenstein gives new life to the original monster story. Victor Frankenstein (Aden Young) creates his monster from various parts but then shuns his creation and attempts to destroy it. This, along with society’s lack of acceptance, leads to great anger and bitterness for Frankenstein (Aaron Eckhart). We find the monster burying his maker and suddenly attacked by a horde of demons. Two warriors fly in to defend him. They bring the monster to meet the queen of the Gargoyle Order, Leonore (Miranda Otto), of which they are part. The queen names the monster Adam. In this fiction, the Gargoyle Order was created by Archangel Michael to fight demons. Adam becomes a pawn in the war between demons and gargoyles. The gargoyles want him to help battle the demons, and the demons want to learn how to bring life to a soulless body for their evil gain.

This film is based on the graphic novel by Kevin Grevioux, who is co-creator of the “Underworld” franchise. Fans of that series will recognize Mr. Grevioux and his deep, raspy voice as he plays the role of Dekar, a henchman to Neberius, the demon prince. Bill Nighy plays the role of Neberius. While he is great in the role, it does remind me of his role in “Underworld.” It is played very similarly.

There is nothing sexually suggestive. There is no nudity, except cleavage and one shirtless scene of Adam/Frankenstein, but the purpose is to show his scars. I counted one vulgar word, sh*t.

There is a good deal of violence, but no blood in these battles. Instead, it shows either a cut with light emanating from it or fire and embers dissipating. There is blood on the forehead of a corpse and blood on Adam/Frankenstein’s forehead as a pentagram is scratched into it. I think the blood on the corpse’s head is most likely a pentagram as well.

There are countless dead bodies awaiting reanimation for possession by demons, because in this story the demons can only possess a body with no soul. Therein lies my reasoning for the offensive rating. I was a bit torn with what moral rating to give this film. I do find this genre interesting and would have given this PG-13 film an “Average—somewhat offensive” (moral rating), if it did not have demons as one half of the war waging in this film. Once possession became the objective, I felt it best rate it Offensive.

I did love the gargoyles and how they change into human form mid-flight or upon landing. The demons, however, looked more like a Halloween mask. In some wider shots, I noticed little if any work done to the hands. Up close in a fight, the hands show more attention to detail, but, overall, they look like humans with a mask. I also felt Adam/Frankenstein could have looked more pieced together. Granted, it has been 200 years, but I would have loved to see different skin tones to further indicate that he had been patched together from various parts. The scars are there, but I think he looks too uniform.

One of the characters says, “God is no longer sole creator of man.” In truth, there is only one creator of man. “The Lord God formed the man from the dust of the ground and breathed into his nostrils the breath of life, and the man became a living being” (Genesis 2:7). “It is I who made Earth and created mankind upon it” (Isaiah 45:12).

Unfortunately, there is something lacking in the story; it feels too shallow—almost superficial, thrown together. Perhaps it is that there are so few characters. There are the ones central to the story and then some en masse for the battles, but not enough storyline. It was a bit disappointing; I had been hoping for more. I really enjoyed the first “Underworld” and also like films such as “Van Helsing” (2004), so I expected to really like this film. I found it not on par with many films of this genre.

If you are like me and you find this film genre interesting, do keep in mind that the troubling part of this movie, the demonic possession, is not a joke, not some fiction to take lightly. I caution against this film because of that part of the storyline. Scripture tells us…

“Be sober-minded; be watchful. Your adversary the devil prowls around like a roaring lion, seeking someone to devour” (1 Peter 5:8 ESV).

I enjoy films of this nature that do not have demonic overtones. Enjoying ficitional monsters is a different thing—they are not real.

Positive
Positive—I felt a sincere and honest effort to show that evil demonism is still alive and working against all humanity. Just look at what our worthless majority of national and local politicians are doing to degrade our highest traditi0nal moral and religious ideals. You know this to be true. Just what Satan and his followers want. There is no offensive filth, overdone bloody scenes, etc. It has an actual moral message… But it is not for little kids. Evil and vile demons are slaughtered in no uncertain manner. As they should be, and as they will be by the forces of God Almighty!! The scenes are just fantastic in scope.
My Ratings: Moral rating: Excellent! / Moviemaking quality: 5

Don Lucero, age senior (USA)
Positive—It’s a great film, the ultimate fight of good vs. Evil, where the gargoyle order established by Archangel Michael fighting with the hordes of satanic spawns. So now we know why gargoyles stay as Church architecture to keep a watchful eye. The film is quite clean, though there is quite a lot of violence, it’s more like comic violence where the satanic enemies will ignite into ashes when struck with a blessed object or weapon. I really enjoyed the film, as it was better than expected, and it has it share of redemption, sacrifice and searching for guidance.

Adam, the Frankenstein monster is seeking redemption for more than 200 years for the murder of Frankenstein’s bride. Though, he don’t have a soul and not created by God, the leader of the gargoyle order see the potential in him to be a godly creature and since God let him walk on Earth he also has the potential for a soul. There is no sex or nudity, it’s a good movie but may not suitable for young children.
My Ratings: Moral rating: Better than Average / Moviemaking quality: 4