for strong pervasive violence, language, some drug use and sexual content 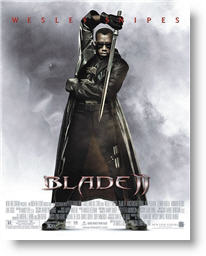 Other films in this series: Blade 1 and Blade: Trinity

If you appreciated the original “Blade” then this 2002 sequel gore fest will probably not disappoint. But a big part of me just wonders if this is what we want to go to bed with in our hearts and minds… The night after I saw this I had a difficult time justifying my money spent on this so called piece of “entertainment”.

In “Blade II” we are treated once again to this dark, sword swinging, karate chopping, vampire half breed (Wesley Snipes) who exists to kill as many fellow vampires as possible. He has all the advantages, such as super speed and strength, yet none of the weaknesses, such as susceptibility to silver and sunlight. He does have, however, the “HUNGER” for blood that he is able to keep at bay using a serum that he injects himself with.

We soon find that there is a new enemy out there that provokes Blade into a very fragile alliance with his enemies so that together they might overcome the enemy. They are a genetically altered vampire race that are able to withstand silver and feed on the blood of other vampires, and who threaten to kill, not just all the vampires, but the whole human race!

Technically speaking, this movie disappoints on a couple of levels. Firstly, the transition from “Blade” to “Blade II” is very sloppy. We are forced to sit through about 10 minutes of a boring narrative explaining why Blade is here, why Whistler (Kris Kristofferson) is still alive, and why vampires don’t like Blade. Unanswered are questions like “where is the girlfriend from the last movie” and “why hasn’t Blade become immune to the serum” (a problem which was a big deal in “Blade I”). Secondly, this whole thing with there being this group of super vamps gone psycho just doesn’t work for me. I know we are dealing on a fantasy realm here, but the story still needs to flow smoothly and this one just doesn’t do it. BUT, I must say that the martial art sequences are incredible and almost make suffering through the thick plot bearable.

The filming is good and some of the acting is not bad, but if you’d rather choose a moving picture that will lift up your spirit and have you cheering for the good guys, don’t go here. It is difficult in the end to figure out who is good and who is bad. “Blade II” offers no moral lesson; there is gore in excess and virtually no point in the final outcome of this movie.

In Colossians 3:12 says, “Therefore as God’s chosen people, holy and dearly loved, cloth yourselves with compassion, kindness, humility, gentleness and patience.” “Blade II” doesn’t even get you to first base. As one of God’s chosen people, I find no peace in this and find it hard to justify spending time, not to mention money, on something that does little more than bring a cloud of darkness over my spirit.

Positive
Positive—Blade 2 is a great summer film. I think the 14 year old and up ages can handle it, depending on the maturity level. It does have lots of gore and violence. Some bad language but it is not overly used. No nudity. The action is fast, well choreographed and keeps you glued to the screen. It also shows a clear fight between good and evil. Good wins out, and those who have chosen evil are vanquished. What could be better?
My Ratings: [Better than Average / 4½]

Adam, age 31
Positive—I saw this film twice during my spring break period and was amazed. The plot, action, and drama drew me in totally. True the “f” word is uttered a few times and even seen through the magic of subtitling, but it in no way denotes the movie. However, this movie is not to be viewed by children under 14. Parents should talk to them after the movie to discuss topics raised in the movie, such as immortality through vampirism. All in all, an excellent film.
My Ratings: [Average / 5]

Ray Lackey
Positive—This movie was just as good as the first as far as the story goes. But with todays special effects it made it even better than the original Blade. When I saw this movie I thought it was awesome. I would recommend it for 17 and up. No nudity, sci-fi violence and strong language.
My Ratings: [Better than Average / 5]

JD, age 25
Neutral
Neutral—I like vampire movies and always like seeing how this “evil” is destroyed. In these days, however, faith and a crucifix alone don’t quite suffice to cut off evil. Still I found myself thinking about two Bible verses: One: That we war against principalities, powers, dominions… all those different kinds of vampire tribes—not that they were well-delineated—made me ponder the different kinds of spiritual wickedness. The second verse I thought of was: Give no place to the devil.

I know Blade had to “make a deal with the devil” so to speak but there are no verses in the Bible for this kind of compromise. We’re told to give no place to the devil. I applaud any movie that shows us that there is evil in the world. But this movie’s way of fighting evil just reveals the world’s way of fighting.

Not my kind of spiritual warrior/savior. If your kid sneaks off to see it, it’s a good conversation starter about how to fight evil. But that’s about it…
My Ratings: [Extremely Offensive / 3]

Carole McDonnell, age 42
Neutral—I will admit that I enjoy vampire movies as well as martial arts, swords, and comic book based movies. So I will say that I enjoyed this movie from that perspective. But I will say that Christianly speaking it is somewhat offensive. Quite a few “F” words. There is more gore than the last Blade as well. I enjoyed the storyline though and the fight scenes.
My Ratings: [Very Offensive / 4½]

Lucus, age 21
Negative
Negative—This film is violence for the sake of it… I sat through this, just, in absolute disgust that some find this kind of film entertainment. Violence, bad language, horror and gore is what this films all about. The Christian rock band Deliverance said it plan and simple in their song “Weapons of Our Warfare”… “Imaginations running wild, Innocent they seem, Polluting young minds, A formulated scheme.” Never has a truer word been spoken. Stay away!
My Ratings: [Extremely Offensive / 2]

Chris St. John, age 30
Negative—When I got out of the theatre, I felt like I shouldn’t have seen it. I was spiritually grieved. The movie was a bit more gruesome than the first one (I could have done without the gore in the club scene). I really enjoy good fighting scenes and action movies, but I will reevaluate going to a movie like this in the future.
My Ratings: [Very Offensive / 2]

Seapig, age 35
Negative—I enjoyed the first Blade movie much more. This one seemed to exist for the special effects. I also found the whole movie to be disturbing. There were a number of younger boys at the theater when I went and I found myself thinking that this type of movie is desensitizing our youth to violence.
My Ratings: [Very Offensive / 2]

Louis, age 40
Negative—I really, really disliked this movie. While watching it I got a really negative vibe. It just seemed so demonic. The special effects and fight scenes were amazing hands down, but I couldn’t allow the feeling I got from this film to go unnoticed. There were many times during the film when I peered into the eyes of some of the characters and saw sheer evil. In no way am I calling the actors evil, but I’ve concluded that God’s Word made the movie transparent to me (and possibly others).

Despite the choreographed fights, the fancy weapons and action, I found this movie to be quite disturbing.
My Ratings: [Extremely Offensive / 5]