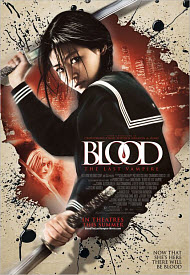 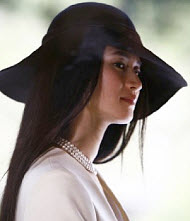 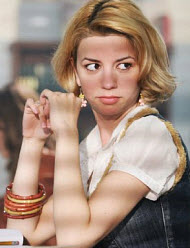 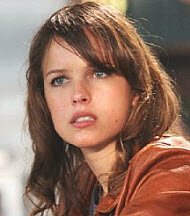 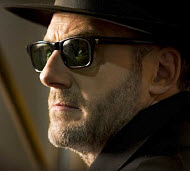 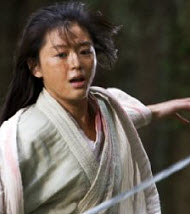 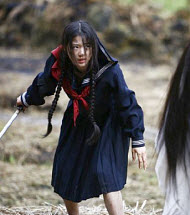 “Now that she’s here, there will be blood.”

It would be better to avoid this bloody, sub-par film. Not only is it filled with constant violence, the gaping plot holes and cheap CGI tricks also contribute to making “Blood: The Last Vampire” a movie that should be skipped when one is considering what to rent for a night in.

Saya (Gianna Jun—“My Sassy Girl,” “Daisy”) is a 400-year-old immortal who is half human, half demon. While her demon kin masquerades as humans and feast and kill whomever, Saya compresses her demon side and only consumes blood through bottled sources. After her father’s murder, her sole destiny became to kill as many demons as she could while she tracked down his murderer and the most powerful of all demons: Onigen. Closing in on the demon’s whereabouts, Saya goes undercover in an American base in Japan. While at the base, she happens to save Alice (Allison Miller) on several occasions, and the two form an unlikely friendship. Together, they try to escape the demons and finally track down Onigen

That is all there is to the plot. Some flashbacks of Saya’s life are shown. On her eternal conscience is the one and only time she killed a human, thus first discovering her demonic origin. While one might counter that this was the first time Saya’s half demon emerged to the surface, one might then have to explain what she had to eat all throughout her childhood, enabling her bloodthirsty origin to remain a mystery.

The movie’s filled with a lot of stylized violence. While the blood looks computer-generated, the majority of the film proceeds to display people being decapitated, vertically cut in half, arms and legs cut off, and even more stabbings. Great lengths were made to animate the fights, but the effort seemingly stopped short of the unmasked demons, since their movements and appearance resembled somewhat 1980s clay-action effects.

However, aside from the weak computer-generated effects, the film also suffered from a poor script, symptomized with huge plot holes. While Alice’s rather defenseless, she does prove herself to be indestructible and rather psychic at times. Plummeting from hundreds of feet and even being set on fire, leaves Alice relatively untouched. After Saya loses consciousness from bullet wounds, Alice somehow knew that all the immortal needed was a few drops of blood. It is never explained how she knew this, since Saya never revealed her true nature. Afterward, the bullet wounds are apparently forgotten.

There are four instances of profanity, including one ‘f’ word. In addition, there’s some false talk of God. During a class discussion, Alice attempts to create a parallel between Satan and Frankenstein. She claims that like Frankenstein’s creator, God abandoned Satan, his creation. Her teacher then states that perhaps God’s an irresponsible parent figure. While God cannot tolerate evil, this is an inadequate comparison. Satan, himself, caused his own abandonment when he chose to sin. God did not create Satan to be evil. When God created everything, He saw that all things were good. King David best summarized God’s presence in Psalm 119 when he asked,

Worthy to be praised are the performances of Jun and Miller; they helped raise the quality of the film. Sadly, even the plot twist and final battle are disappointing. There are plenty of action movies that are cleaner, have better substance, and are actually enjoyable to watch. I recommend searching for one of those before giving “Blood: The Last Vampire” any consideration.

Movie Critics
…Gianna is never really convincing as a martial artist, although she sure looks great. … This isn’t a great movie. But it’s sincere as an entertainment, it looks good, it’s atmospheric, and I will perk up the next time I hear Gianna is in a picture. … [3/4]

Roger Ebert, Chicago Sun-Times
…If only the projectionist could be persuaded to play the first 10 minutes over and over for two hours, this might be a satisfying movie. Unfortunately, the middle and the end feature a weak lead character, choppy fight choreography, humorless dialog and computer-generated effects that look as if they came from the “Ghostbusters II” era. …

Peter Debruge, Variety
…The mixed-gene pool of talent doesn’t quite jell, but a saving grace is Korean sweetheart Jeon Ji-hyun (acquiring the moniker Gianna) in her hyped Hollywood debut. She displays ample aptitude for being an action heroine, doing most of her own tendon-twisting martial arts stunts and looking utterly fetching in a sailor suit…

Maggie Lee, The Hollywood Reporter
…Vampire action-schlock aside, this ‘Blood’ lacks bite… The finale of this tedious piece of Asian-ish action-schlock based on a popular anime series implies an intention to make more. One was plenty for me. …