for sequences of intense supernatural violence and action, disturbing images, thematic elements and some language. 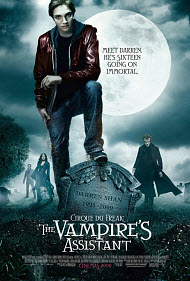 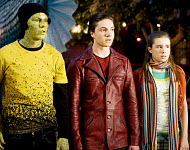 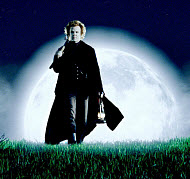 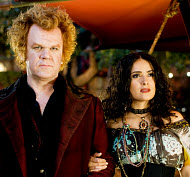 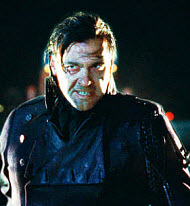 Spiders in the Bible

“Are you ready to leave your world behind?”

Darren Shan (Chris Massoglia) is nicknamed “Mr. Perfect.” He makes good grades, has the traditionally intrusive parents, and holds a strange fascination for spiders. The only weak link in his rather bland, planned-out life is his best friend Steve (Josh Hutcherson). Steve is labeled a bad boy who pushes his polished friend to commit bad deeds. While Darren’s passion is spiders, Steve is in love with everything about vampires. When the teen boys find a flyer about a freak show, they become intrigued and sneak out to watch the eerie show.

At the show, Steve recognizes one of the freak performers as Larten Crepsley (John C. Reilly) who’s a 200-year-old vampire. With Steve in awe of seeing a real-life vampire, Darren becomes enamored with Crepsley’s magical spider and steals it after the show.

The next day at school, the spider is accidentally released from its cage. In the mayhem, Steven gets bitten on the face and slips into a coma. Desperate to save his friend, Darren rushes back to Larten Crepsley and pleads for an antidote. The vampire agrees to provide the cure, but only if Darren himself agrees to become a half vampire and his assistant. Desperate to save his best friend, Darren accepts the bargain and converts into a half vampire. Now, craving blood, Darren realizes he cannot continue his old life and fakes his own death. Afterward, he joins Crepsley and the traveling cirque.

After discovering his friend’s betrayal, Steve joins the Vampaneze, the enemy of the vampires. While vampires only consume small amounts of blood to spare lives, the Vampaneze kill all their victims by draining them completely. The once best friends are now on opposing sides that are on the brink of war due to a waning truce.

I’ve never read the Cirque Du Freak series, so I cannot judge the quality of the film adaptation. I can say, however, that the movie screams for the hope of impending sequels. Many characters and random plot points are crammed in, scarcely explored, and left only to be answered by future sequels.

The movie has a lot of talent from Salma Hayek to Willem Dafoe, but Hayek’s character mostly just shows up to monotonously state her predictions, and Dafoe pops into a few brief scenes to ramble about the vampiric feud before disappearing again.

Although the movie is a bit confusing and an advertisement for future releases, John C. Reilly is the one responsible for the giving the film at least some spark and the film’s only laughs. While Massoglia’s acting is mediocre, this was mostly likely due to his flat, limited character. For the visual treatment, the cinematography and costume designs are colorful. Add this to the occasional humor, the film aimed to land itself within the teen/adult enjoyment level.

Violence is common throughout the film, so if the dark mood hasn’t yet ruled out younger children from seeing it, then the violence should. There are plenty of fights, an implied murder and stabbings on at least two occasions. A regenerating woman has her arm bitten off by a some kind of rabid wolf creature and then snaps off her own finger. In an odd scene, she and her apparent love interest then begin to suck on both ends of her detached finger.

While Darren has a budding romance with a monkey-tailed girl, it is kept respectful, and they only share a brief kiss. Crepsley’s relationship with Madame Truska remains sweet. While Truska’s character is honorable and well played by Hayek, her cleavage is often shown with very low-cut dresses.

The villain, Mr. Tiny (Michael Cerveris) is evil and creepy. He has the power to resurrect people into little demon creatures, rewrite history and even prophesize. While these things aren’t frequently shown, his character does have a resemblance to Satan with his lies and the false hope he gives to Steve.

These lies were the perfect bait for Steve who was sick of his own life and yearned to become a vampire. And when Crepsley refused to convert him, Steve was all too happy when the rival Vampaneze welcomed him into their world. After his conversion, he felt powerful, with a sense of purpose. However, Jesus said, “What good is it for a man to gain the whole world, yet forfeit his soul?” (Mark 8:36).

Darren’s character was pretty respectful. In a way, he sacrificed his life in order to save his friend. He also refuses to drink blood, not wanting to lose the last part of him that’s human. While he’s tempted on several occasions, he resists the urge and only decides to give in order to save yet another person’s life. Christian are to live a life of goodness, in opposition to man’s sinful nature:

Although his flesh craved blood, Darren’s spirit felt it was wrong. Likewise, Christians are commanded to resist the urging of the flesh and to act out the fruits of the Spirit. Further along in the chapter, Paul writes the Spirit’s fruits which we are to act out are “love, joy, peace, patience, kindness, goodness, faithfulness, gentleness and self-control” (Galatians 5:16-17).

I do not recommend the film. While I enjoyed John C. Reilly’s performance, it was the only steady about the film; the rest felt disjointed and much too hopeful for the possibility of future sequels. The first movie to any sequel should build an audience’s loyalty first and foremost and not make the automatic assumption that they’ll be back for more.

Comments from young people
Negative—This movie is not what the previews led you to believe it was. It was dark and scary, and down right disturbing in some parts. Even the opening credits were a little creepy, please avoid seeing “Vampire’s Assistant,” you will regret it when it is over.
My Ratings: Moral rating: Offensive / Moviemaking quality: 3½