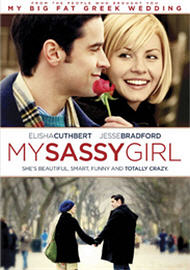 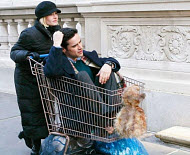 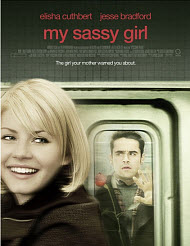 “The girl your mother warned you about.”

The title of this film, along with the sweet promotional photos of the co-starring couple gazing adoringly at one another, might create the false assumption that the “sassiness” referenced in the title character leans more toward definitions numbered 2 and 3, but one quickly discovers that less-catchy yet more specific wording might have been chosen in this instance: “My Rude and Disrespectful Girl.”

The film opens with a brief background story on the hero, Charlie (Jesse Bradford), who we learn was raised by an old-fashioned, extremely “nice” couple, who have instilled in their offspring an extremely “nice” character. This proves to be an important backdrop for the ensuing storyline, which requires the viewer to believe that anyone would be “nice” enough to want to continue seeing “sassy” Jordan (Elisha Cuthbert), who from their first meeting is completely rude, disrespectful, and even downright cruel toward Charlie. There is nothing charming about her, and it is made clear that she is being deliberately mean-spirited, not merely making innocent social blunders.

From their first meeting, through the entire film, Jordan is more often than not intoxicated to the point of almost daily passing out due to over consumption. The way that this is presented forces one to assume this is meant by the filmmakers to be accepted as one of Jordan's endearing qualities, but it only serves to make the viewer squirm for Charlie as he with inexplicable patience handles her embarrassing behavior in a variety of circumstances. While Charlie is generally portrayed as having a chivalrous and caring nature, believability is stretched to the point of breakage as through scene after painful scene the viewer is given no reasonable answer to the question, “Why is he still with her?”

Although Charlie is the only likable person to be found in the first half of the film, we are faced with no choice but to see him as a wimp who is being endlessly bullied and having his life and career destroyed by a girl he just met, simply because he is too scared to say no to her. In fact, the two are never seen having a “good time” together until near the middle of the movie, when a beautifully crafted montage of the two dancing and laughing together during their relationship (something we had not been shown previously) becomes a bridge into a completely new story. Honestly, when the montage began I thought it was the end of the movie, and I was already formulating my final review in my head before I realized there was more to come. While I was relieved to not be left with the mess that had been created up to that point, it caused a confusing disconnect as the two “halves” fitted together a bit jarringly. Ultimately, I was left feeling as though I had just viewed two films back-to-back—the first being quite distasteful and the second incomplete, yet satisfying.

Kudos to the author of this story for originality. Apparently it is a remake of a film based on what is supposedly a true story taken from an Asian blog. There is more than one unexpected twist which engender new interest in the characters and their fates. The cinematography is fresh and artistic, yet subtle enough not to distract. There are a few winsome fairy tale-ish sequences (think “Big Fish,” only not as good). While Bradford's performance is less than noteworthy, Elisha Cuthbert's talent rises above the character she was given to play, and she almost saves the bitter first half with a stellar performance.

Arguably, the most important part of making a successful film—a film which is not only an artistic achievement but also something purely entertaining—is the presentation of well-rounded character sketches which compel the viewer to care what happens to the people they are watching. The fact that a character so bold, colorful, and well-played as Jordan Roark could yet remain frustratingly 2-dimensional after the first half of the picture indicates that there was something seriously lacking in this script.

Of moral concern is the aforementioned drunkenness by Jordan, loose banter of a sexual nature between Charlie and his male friend, Charlie engages in flirting with a “woman” at a bar and later finds out it is a man when they are standing next to each other at urinals, several times the male body part is referenced by name, and there is very coarse profanity scattered throughout the film. Surprisingly, there are no scenes of sexual activity, and there is no nudity.

Spiritually, this film can serve as a reminder to Christians of the amazing Grace and Mercy that the Lord pours out on us daily, as we witness Jordan's abhorrent behavior toward Charlie and the unconditional love and acceptance he gives her in return.

Also of spiritual import is the confusion that Charlie and Jordan both face as they travel through life with no Anchor. Neither of them is sure what “love” is, or how they should act when they feel this fleeting emotion, as they have only been exposed to the self-serving version of “love” which the world so hungrily chases.

[What is true love and how do you know when you have found it? Answer]

This film is definitely not for children. Adults: if you choose to give this one a try, watch it to the end—do not give up half way through.