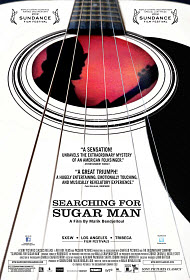 Get biblical answers to racial hot-topics. Where did the races come from? How did skin color come about? Why is it important to have a biblical foundation for such issues?
Other films involving Apartheid

Movie review: “From One Blood: The Story of Gerrit Wolfaardt” (2003)

Here’s what the distributor says about their film: “Two South Africans set out to discover what happened to their unlikely musical hero, the mysterious 1970s rock ‘n’ roller, Rodriguez.

In 1968, two producers went to a downtown Detroit bar to see an unknown recording artist—a charismatic Mexican-American singer/songwriter named Rodriguez, who had attracted a local following with his mysterious presence, soulful melodies and prophetic lyrics. They were immediately bewitched by the singer, and thought they had found a musical folk hero in the purest sense—an artist who reminded them of a Chicano Bob Dylan, perhaps even greater. They had worked with the likes of Marvin Gaye and Stevie Wonder, but they believed the album they subsequently produced with Rodriguez—‘Cold Fact’—was the masterpiece of their producing careers.

Despite good reviews, ‘Cold Fact’ was a commercial disaster and marked the end of Rodriguez’s recording career before it had even started. Rodriguez sank back into obscurity. All that trailed him were stories of his escalating depression, and eventually he fell so far off the music industry’s radar that when it was rumored he had committed suicide, there was no conclusive report of exactly how and why. Of all the stories that circulated about his death, the most sensational—and the most widely accepted—was that Rodriguez had set himself ablaze on stage 4 having delivered these final lyrics: “But thanks for your time, then you can thank me for mine and after that’s said, forget it.” The album’s sales never revived, the label folded and Rodriguez’s music seemed destined for oblivion.

This was not the end of Rodriguez’s story. A bootleg recording of ‘Cold Fact’ somehow found its way to South Africa in the early 1970s, a time when South Africa was becoming increasingly isolated as the Apartheid regime tightened its grip. Rodriguez’s anti-establishment lyrics and observations as an outsider in urban America felt particularly resonant for a whole generation of disaffected Afrikaners. The album quickly developed an avid following through word-of-mouth among the white liberal youth, with local pressings made. In typical response, the reactionary government banned the record, ensuring no radio play, which only served to further fuel its cult status. The mystery surrounding the artist’s death helped secure Rodriguez’s place in rock legend and ‘Cold Fact’ quickly became the anthem of the white resistance in Apartheid-era South Africa. Over the next two decades Rodriguez became a household name in the country and ‘Cold Fact’ went platinum.”