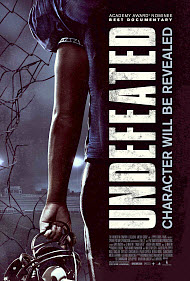 At what point do you quit trying?

What are the best ways to overcome serious negative environmental influences and succeed in life?

Do good things generally happen for people who make good choices and who approach life the right way?

providing more positive reinforcement to others, to encourage their good behavior

becoming more tolerant and patient of others

Teens—Have questions? Find answers in our popular TeenQs section. Get answers to your questions about life, dating and much more.
Christian living

Are you thankful to God? GO

“Character will be revealed.”

Winner of the Academy Award® for Best Documentary of 2011, “Undefeated” follows high school football coach Bill Courtney as he attempts to guide the players at Manassas High School in Memphis to a successful season. Manassas has never won a playoff game, and Courtney looks at the season as the best chance to end that losing tradition. Many of the core group of players who entered high school together are seniors, as the season begins. What starts as a straightforward chronicle of an athletic season quickly develops into an examination of the challenges the young men face off the field and a meditation on the difficulties of overcoming environmental influences in order to succeed in life.

The film’s thesis, adopted from the philosophy of Coach Courtney is that good things happen on and off the field for people who make good choices and who approach life the right way. A combination of the notion of karma and the power of positive thinking, the philosophy informs and motivates the coach’s interactions with the young men, convincing him that if they can be persuaded to be and act as people of character, “winning will take care of itself.”

That’s a positive message, and it is easy to see why the documentary has been an audience favorite in the film festival circuit. It uses the arc of a football season to add structure and familiarity to a story that is ultimately about the virtues of personal integrity, responsibility, and commitment.

These are, of course, laudable virtues, almost universally admired. So much so, that if the film has a flaw it may be in its unwillingness to probe beyond the surface level of the conflicts and problems to truly examine whether its underlying philosophy is true. Good things happen to many of the young men, and Courtney does his best to draw their attention to what he believes to be the connection between their good choices and positive outcomes. In one truly inspirational scene, a player who has been battling to come back from an injury is told that a friend of the football program, inspired by his work ethic and commitment, has made a very generous offer that will benefit him greatly moving forward. Courtney hammers home the notion that this reinforces the karmic thesis—the offer would not have come had the player quit or not been committed once things became emotionally and physically difficult.

That’s true as far as it goes (an assessment that could be applied to the film as a whole), though it curiously glosses over some of complexities and complications of life that might challenge the film’s thesis—complexities that are ultimately what makes the young men’s achievements so rousing and inspiring. For example, the young man does quit as a result of the injury. It is hard to see someone else wearing his number, and he admits to jealousy of another player who has been a troublemaker and yet has received “fifty strikes” in a world where others only get three or less before they are out. If he is ultimately rewarded for his perseverance, it is only because others have also persevered in their forbearance.

The exercise of forbearance—the privileging of patience over punishment—is another place where the film makes a gesture at recognizing complexity, but then doesn’t know quite what to do with more complicated responses. After a particularly frustrating encounter leading to the suspension of a player, Courtney wonders, “At what point do you quit trying?” That’s a reasonable question, but one the film never really answers (unless the implied answer is “never”). On another occasion, he laments that he is “exhausted all the damn time” and that he gives up “emotional capital” to the players that leaves him unable to be patient with, or present, for his own family. Here again, though, having introduced this conflict, the film largely ignores it until a postscript informing us of Courtney’s decision once the film was over.

The failure to examine or probe beyond the surface level conflicts or simple commitment-reward thesis doesn’t make “Undefeated” a bad movie, though. Seeing the coach and player hug after a last game, hearing how Courtney emphasizes the finality of the final season and brevity of high school, watching as a player realizes that an exam will most likely have more impact on his future than the game he loves are all emotionally powerful moments.

The most striking element of “Undefeated” for me was the way in which Courtney used constant positive reinforcement and how he affirmed the player so much more frequently than he criticized them. Even when their behavior had only one positive attribute and four or five negative qualities, he thanks them for the thing they did right. Early in the film this bothered me, as it seemed to let them “get away” with a lot of behavior they shouldn’t and stick with bad habits. As the film progressed, however, I came to think that the skills needed to survive in a harsh and hostile environment are often very different from those needed to thrive in a cooperative team endeavor. One of the most challenging aspects of the film is how Courtney will grasp at the smallest successes in personal behavior to give his players the experience of positive feedback. This approach makes perfect sense after the film shares the coach’s back story and explains the particular way in which he psychologically empathizes with the young men he coaches.

It is worth noting in passing that although the film is devoid of sex and violence, Courtney cusses a lot. In one humorous early scene, he complains that the players made him “cuss way too much” to get their attention, so much so that he had to “go home and ask for forgiveness” for the way he talked. By the end of this speech, though, he has slipped into dropping another epithet. It’s just the way he talks. Christian viewers who are particularly sensitive to profane or obscene language may be surprised, though, in Courtney’s defense, it is rarely (if ever) directed at other people, generally just bursts of verbal frustration. It does occasionally make for an odd juxtaposition, though, to have the man who preaches and practices emotional restraint seemingly unable to curb that one bad habit. Courtney says about one of his players with serious anger issues that he truly believes that “I don’t think he can help it.” Perhaps here, too, is a lesson about how living with our own imperfections can make us more tolerant and patient of others.