for disturbing violent content including torture, and language throughout. 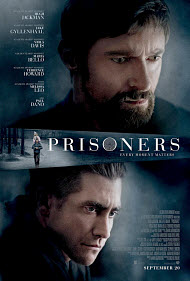 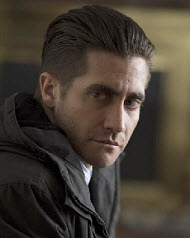 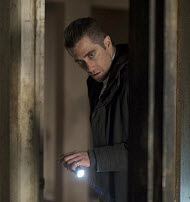 “waging a war against God”

a father trying to rescue his daughter

sin and the fall of man / compare to: goodness and righteousness

When does one cross the line between seeking justice and becoming a vigilante? 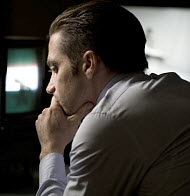 the difficult job of being a police detective on such crimes

How far would you go to find your child?

The film opens with The Lord’s Prayer recited by Keller Dover (Oscar® nominee Hugh Jackman—“Les Misérables”). He and his son are hunting a deer for Thanksgiving. Keller and his wife Grace (Maria Bello—“Beautiful Boy”) and son and daughter then walk over to neighbors and good friends Franklin and Nancy Birch (Oscar® nominees Terrence Howard and Viola DavisTerrence Howard—“The Help”) and their two daughters to partake of deer on Thanksgiving.

In the midst of friendship, laughter, and fun, the two youngest girls leave the house to find a whistle. Within minutes their holiday joy turns to terror when the girls don’t return. Enter Detective Loki (Jake Gyllenhaal—“Brokeback Mountain”) who has a record for solving every case he ever had, is assigned to the girls’ disappearance.

Within hours, a suspect is obtained—a mentally challenged man who attempted to flee officers. The families find some solace in his arrest, only to have it short lived, when he is released into the care of his aunt. This sends Keller into an anger-filled rage, and sends a God-believing man to extreme measures to find his daughter.

I chose this film based solely on the actors involved, then I saw the trailer. As a parent, I knew this film would be difficult to sit through. So let’s get started, first with acting.

The acting is hit and miss. Hugh Jackman is the portrait of a father. I believed every emotion and felt it as if he were pulling it from personal pain. Maria Bello, however, is type casted, and I grew tired of her playing the same ole role. Viola DavisMaria Bello, as always, gave a good performance. Terrence Howard’s acting left a lot to be desired. Finally, Jake Gyllenhaal—his entire performance is hit and miss, from the tattoos to the portrayal as a hardcore gumshoe. I couldn’t fully buy into it. The plot was a full scale who dun it, suspense-filled thriller shown from every angle.

Now to the objectionable content, there is plenty to go around. The violence is gruesome; not to spoil the plot, but a suicide is shown, a brutal beating and torture is shown. Language is intense, expletives include over 50 f-words, 14 s-words, a** (3)—not to mention the offensive overuse of the Lord’s name being taking in vain—“G*d-damn” (2), “Oh G*d” (2), “Jesus Christ,” “Jesus,” OMG (3), “My G*d,” “For G*d’s sakes,” “God,” “swear to G*d.” There is no sex or nudity, but considering the context of the film, your imagination is allowed to run wild.

Finally, the most important part of the film, the biblical aspect. This movie is truly a test and will be for those who choose to view it. We see a man reciting the Lord’s Prayer in the beginning of the film, who has his faith truly tested. His only daughter has vanished, and he feels the cops are failing. So he takes matters into his own hands. Right away we Biblically know this is wrong. The Bible clearly states vengeance is not ours. Keller abandons faith when tribulations occur in his life. He turns to everything, but God. We are called to rely on God in hard times. The film shows the fallen and sinful nature of man, and how desperate and depraved we become without God. In the film, a character states that killing children is how we wage war against God, it turns people into demons. Those words echoed.

Positive
Positive—While the character development and acting were both extraordinary, we felt as though the ending was terribly disappointing. The ending could have been better developed, writers leave the viewer hanging, wanting a better ending ! After investing nearly 2½ hours Of following twisting turns and emotional highs and lows, the ending drops the viewer with nothing but loose ends. Time could have been better spent tying characters involvements into the closing moments and how they effected the missing girls, and their recovery. A good movie whose ending stunk!
My Ratings: Moral rating: Better than Average / Moviemaking quality: 5

Matt, age 50 (USA)
Positive—I just want to say that I really appreciate the honesty in this film, most especially how a person who faces these situations either from the perspective of the father whose daughter is missing or the detective having to endure such a situation while still trying to maintain composure to get the girls safely home again. I, at first thought, “oh great not another slash at Christianity from Hollywood…” But when you actually look into the movie, the distinctions between Christianity and Occultism are quite clear. These worldviews are not meshed together like so many Hollywood films have done in the past.

Hints about the mentality behind the occult and its negative effect on those involved, whether participants and/or victims, was quite clear. I really liked how in all honesty it showed a Christian’s struggle through such turmoil, and what happens when he tries to take measures into his own hands. See all »
Also, I do think the character Hugh Jackman played was shown trying to hang onto his faith, even through what he was doing and what was going on. I mean look at the emotion he has when he says the Lord’s Prayer, and how he stops at the words “As we forgive those who trespass against you,” clearly he’s having a moment of contemplation and guilt about what he’s doing. He even asks for forgiveness of his sins. Of course, he still struggles with his rage.

Even near the end, he prays to God to keep his daughter safe. As if he is still clinging to his faith, and reaching out to God. Yes, the movie is hard to watch, I agree. However, it truly depicts the emotional and physical turmoil of everyone involved in such a horrorific incident involving loved ones. Obviously, it’s not recommended for children or those weak in the stomach. I’ll take this over any sexual laced, disgusting, piece of trash that’s playing on the TV or movie screens these days.

Mah, age 28 (USA)
Neutral
Neutral—I'm divided on my take of “Prisoners.” On one hand, this movie is really well done in terms of story and performance. But… the content is so dark, disturbing, and violent in parts that one has to determine whether or not to put the content aside just because the movie was crafted well. It was a good, suspenseful, nail-biting, heart pumping story that teased audience members for two and a half hours (which didn't seem that long, and it goes by fast) and content aside, I would recommend adults seeing this film in a heart beat, as Hugh Jackman puts in one of his best performances since last I saw him in “Les Miserables” in December.

As a Christian, no I don’t recommend it. As an avid movie buff, I say otherwise. Don’t take the kids if you choose to see it though. The choice is ultimately yours.
My Ratings: Moral rating: Very Offensive / Moviemaking quality: 5

Alexander Malsan, age 23 (USA)
Negative
Negative—This movie puts Christians and people who pray in a bad light. It depicts Christians as murderers, violent or just plain dumb and making bad decisions. It shows the man praying throughout the movie, then abusing an innocent person. There are better ways of doing things. And the so-called once a Christian woman was even worse. I wouldn’t recommend this movie.
My Ratings: Moral rating: Extremely Offensive / Moviemaking quality: 4

Janis, age 60 (USA)
Negative—This is another anti-Christian movie from Jewish owned and controlled Hollywood and is being played almost non-stop on Jewish-owned Showtime. I came away from it hating the crazy Christian woman who used her religion to justify her psychotic murder of children; a really abominable woman and even worst position to put Christianity into.
My Ratings: Moral rating: Very Offensive / Moviemaking quality: 2