for some drug use and a scene of violence. 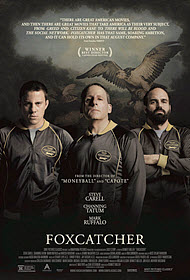 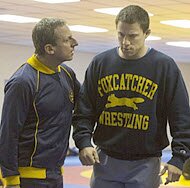 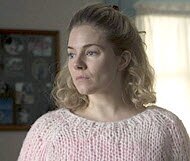 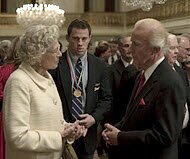 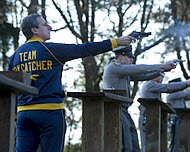 outsider who craves the spotlight 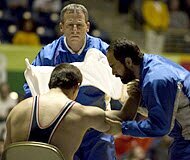 the perceived need to prove one’s self worth

wanting to return the country to its glory days

“Foxcatcher,” based on the true-life story of millionaire philanthropist, John DuPont and the Olympic wresters, Mark and Dave Schultz, is directed by Bennett Miller and co-written by Dan Futterman (the other writer is E. Max Frye). They also wrote and directed “Capote”, a film similar to “Foxcatcher” in its depiction of an enigmatic outsider who craves the spotlight while the light inside him fades to a cinder.

Truman Capote used his talent, a considerable one, to achieve his ends. John DuPont, an heir to the DuPont chemical fortune, had little innate talent but a considerable sum of money to fund his goals. These two films about similar yet different kinds of men reveal how a quick climb to the top often go hand in hand with an even faster downward spiral.

John Du Pont (Steve Carell) is a middle-aged man who lives virtually alone in a mansion in Newtown Square, Pennsylvania, not far from Valley Forge. “Foxcatcher” repeatedly references the historical landmark and the battles that were fought there. The reasons behind the allusion are vague. The filmmakers may want the viewer to draw his own conclusions, but much like Mr. DuPont himself, the writers and the director often step beyond suggestion in order to force a point.

Their depiction of DuPont’s obsession with Valley Forge and his extreme brand of patriotism subtracts from the story. As a political commentary on the 1980s, the time period in which the story takes place, they fail to close the deal about how the Reagan years, the so-called “me decade,” gave rise to a greed-and-power culture that in turn bred greed-and-power crime. A story about a murder, especially a real-life murder, needs focus. By giving us too much background, and too much socio-political explanation, Miller, Futterman and Frye block the view and gum up the works of what could have been an intriguing true-crime story.

The only other occupant of the vast DuPont estate is John’s cold and domineering mother, Jean (Vanessa Redgrave). John has many protectors and lackeys, but he has no friends. The only companion he had as a boy was the chauffeur’s son who was paid to by John’s mother to act as his friend. John has had a number of hobbies: stamp collecting and bird watching are among his favorites (whatever that “friend” got paid, it wasn’t enough), but now DuPont wants to develop a training facility for world-class wrestlers on the family estate.

He recruits Mark Schultz (Channing Tatum), a 1984 Gold Medalist who, after his Olympic glory, is now giving motivational speeches to grade school kids at $20 a pop, living in a dilapidated apartment and dining on instant Ramen noodles. He accepts DuPont’s offer to be part of the millionaire’s Team Foxcatcher, a private team of elite wrestlers. DuPont also wants to recruit Mark’s brother, Dave (Mark Ruffalo), but Dave is reluctant to uproot his wife and children and move to Pennsylvania. Unlike his younger brother, Dave is intelligent, grounded and realistic. He is also an Olympic gold medalist, one who has moved beyond his athletic glory days and found success and contentment as a college wrestling coach and as a family man.

“What does DuPont get out of the deal?” Dave asks Mark, who had not considered that his contract might include some unpleasant fine print. Mark learns quickly that strings, lots of them, come with the generous salary and the luxurious digs (an immense cabin on the estate) that DuPont lays in front of him. The filmmakers get fuzzy again and let us reach our own conclusions about where DuPont and Mark took their relationship, but it’s not hard to get their hint from several awkward scenes: a promotional photo session that involves lots of body oil, a late night one-on-one wrestling match in the gym, cocaine use, and some rather strange looking highlights that suddenly appear in Mark’s hair. Liberace’s seductions in “Behind the Candelabra” seem tame by comparison. In real life, it is questionable that any of those things actually occurred. In fact, Mark Schultz has expressed outrage over those scenes, and several others, and is threatening a lawsuit, or worse (perhaps a body slam), against the director.

Eventually, Dave Schultz does make the fateful decision to work for DuPont. The film does not give an explanation for his change of heart, but we’re led to believe that DuPont made Dave a financial offer that he could not refuse. There are some good scenes that follow: DuPont giving a pep class to his wrestlers (it’s more for himself) as his mother watches disdainfully (“wrestling is a low sport, and I don’t want you to do something low”), Dave getting his brother back in shape and at regulation weight after Mark binges on junk food in a fit of shame and disgust, and Dave giving an interview in which he searches for but cannot come up with any complimentary words about his boss, but there are too many other scenes that are empty and pointless. There are long gaps in which little seems to happen. The lead up to the 1988 Olympic games has all the anticipation, sweat and gusto of an intramural match.

The film is light on plot and heavy on symbolic fluff: a fleeing fox, escaping horses, peering owls, stuffed birds—just like the ones in “Psycho.” On that note, DuPont’s mother is usually filmed from a distant perspective, and in one scene she even sits in a wheelchair. All of this may be a creative-writing student’s or a film-buff’s banquet, but the homages and the symbolism, like DuPont himself, gets arthritic and even annoying after awhile.

The filmmakers give DuPont’s mental illness (paranoia, detachment from reality, grandiosity) less attention than they give the environment that coddled the behavior and allowed it to worsen over time: the trappings of wealth, the separation from the realities of the rest of the world, and the fear of those around him to speak truth to power and to put a stop to DuPont’s increasingly bizarre behavior. That atmosphere does create an aura of dread and a creep toward disaster that is evident from the film’s early frames; however, most of “Foxcatcher’s” suspense, intrigue and fascination are due less to the script than to the extraordinary, often spellbinding performances of the cast.

Steve Carell does not portray a man slipping slowly into madness. His DuPont is bonkers from the start (“I want us to be friends, Mark, so don’t call me Mr. DuPont, call me what my friends call me: Eagle or Golden Eagle”), but he hides his darkest defects—as well as his sharp eagle talons—behind other less bizarre traits: shy hand gestures, a scampering pigeon-toed gate, and a head turned in constant profile as though he were posing for a Renaissance portrait. Carell’s portrayal is a pointed and well-structured one. It’s a bit too mannered for my taste, but it works.

I think it pales in comparison to the performances given by Channing Tatum and Mark Ruffalo. They are physically perfect for their parts and have the much harder tasks of revealing men who are in a constant struggle with forces that even their considerable strengths cannot push back. Whereas Carell gives us a mostly one-note character, his supporting actors have to play the whole arc from innocence to awareness and from enthusiasm to delusion.

Vanessa Redgrave, unsurprisingly, steals the few scenes she has. Even when she sits silently in a wheelchair and stares coldly at her son who is trying desperately to impress her, she commands the exchange. That moment should have been a standout for Carell, but Redgrave’s icy glare steals the match from him, hands down.

Tyrants often rule in gold fortresses. “Foxcatcher” was released at Christmas time when we remember a King born during the reign of a despot who had three of his own sons murdered because they were a threat to his paper crown. His killing sprees would later go even further in order to protect his Earthly fortunes. He was most likely mad, but he had the shrewd sense to surround himself with a bevy of handlers, protectors and excuse-makers.

John DuPont was not King Herod, but he thought he could act with impunity. Why would he think otherwise when there was no one willing to stop him? Sometimes the darkness is so thick that it’s hard to see the star in the sky. There had to be a star above the Foxcatcher estate the same way there was a star above Herod’s kingdom. Some men from the East pointed to the star in Judea, and they put their trust in it. No one pointed to a star in the sky near Valley Forge where John DuPont lived. No one even looked up. If they had, things might have been different.

Positive
Positive—I knew nothing about this true story about John Du Pont, a wealthy man who wants to help the American sports image by hiring a young American champion wrestler, Mark Schulz, to prepare a winning wrestling team for an international match. Steve Carell plays the role of Du Pont, wearing heavy make-up that disguises him completely.

As impressive as the make-up was and the challenge of playing a role so contrary to the light-hearted drama that Carell usually plays, I found his performance disappointingly wooden. I kept thinking that this was Carell in make-up.

Channing Tatum, on the other hand, does an unexpectedly sensitive job in the role of Mark Schulz, the naive and vulnerable sportsman who wants to be successful and falls under the tragic spell of Du Pont. But the movie belongs to Mark Ruffalo, who puts in a spectacular performance as the older, wiser, more talented brother who is not as gullible with Du Pont. The range of emotion that Ruffalo displays in this role dazzled me. His acting talent is enormous.

After I saw the movie, I actually e-mailed Mark Schultz using his Web site and shared my feelings about the story (spoiler alert avoided). He answered me promptly and thanked me for my sentiments. This is a very sober movie, with some very difficult moments.
My Ratings: Moral rating: Offensive / Moviemaking quality: 4