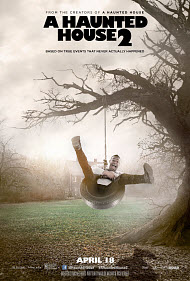 ghosts and spirits in the Bible

Here’s what the distributor says about their film: “‘A Haunted House 2’ is a sequel starring Marlon Wayans as Malcolm who, after exorcising the demons of his ex, is starting fresh with his new girlfriend and her two children. After moving into their dream home, Malcolm is once again plagued by bizarre paranormal events. ‘A Haunted House 2’ is inspired by the latest supernatural horror movie franchises and shows that this time… it’s not just the house that’s haunted!”

Movie Critics
…unapologetically stupid sequel… The real bad guy is Wayans, the star and writer, for assaulting us with witless, gratuitous visuals and pointlessly offensive gags. …

Stephan Lee, Entertainment Weekly
…as inept and puerile as its predecessor… technically inept, damn near plotless, and mired in humor so puerile, ugly and regressive that this critic witnessed a gaggle of preteen theater-hoppers groan with exasperation at several of the running sex jokes. …

Andrew Barker, Variety
…More of the same, no matter how lame. …

Justin Lowe, The Hollywood Reporter
…Already the franchise displays a sputtering exhaustion. … The tone grows ever more shrill and desperate. …

Andy Webster, The New York Times
…Horror-movie spoof is so lazy, it practically parodies itself… it’s sexist in the same lazy, thoughtless way that makes the whole film feel like circling a drain.

David Berry, National Post
…The film’s no-holds-barred humor can best be described as “In Living Color” without television’s FCC oversight. …

ScreenIt!
…In the running for worst film of the year… The story is a sprawling mess, and it feels much, much longer than 87 minutes…

John Semley, The Globe and Mail