for crude and sexual content, language and some drug use. 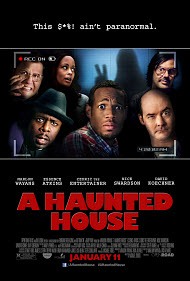 ghosts and spirits in the Bible

“Inspired by untrue events. No horror movie is safe.”

“A Haunted House” is the latest horror film parody by the Wayans” brothers, this time taking on “Paranormal Activity” with bits of other movies thrown in, as well—particularly “The Devil Inside.” Malcolm and his girlfriend Kisha are ready to take their relationship to the next level, so he invites her to move in with him. “Tragedy” strikes almost immediately, as Kisha’s arrival indirectly leads to a death—the aftermath of which is quite hilarious. (How could a death be funny? I don’t want to spoil it, as it was one of the film’s best laughs, due to Malcolm’s reaction). The couple then begin to experience supernatural phenomena around the house, and Malcolm has security cameras installed to confirm the reality of what’s occurring.

The plot is relatively thin, so that’s really about as far as a summary can go, but, in a spoof, what would you expect? I was interested in seeing this film when I saw the humorous trailer a few months ago—and because I remember enjoying the first few “Scary Movie” films by the Wayans” brothers. When I saw some secular viewers complaining that it was more like pornography with a ghost involved, I reluctantly decided to skip it. I often check Christian reviews, so I have some idea of a movie’s content, before I check it out, because, typically, unbelievers aren’t bothered by what we would be. Remember “they think it strange that you do not run with them in the same flood of dissipation, speaking evil of you.” So when even THEY think something is overboard, you know it has to be bad. With all that in mind, I figured a few laughs wouldn’t be worth the torture. However, I received an e-mail a few days ago saying that I’d been selected to review “A Haunted House” (I requested the assignment months ago), and, after some consideration… I decided to take one for the team. You’re welcome.

I laughed a lot more than I expected. The movie is peppered with hilarious situations and even some low key one liners that pack a punch. The Wayans” brothers do know how to deliver comedy without being vulgar and disgusting. Unfortunately, in this movie, that’s the majority of what we get. It would take some serious effort to count all the curse words and blasphemies uttered throughout. I don’t care for foul language, but I can deal with those things in a secular movie. Nowadays, it’s to be expected. But like the non-Christian viewers complained… “A Haunted House” probably would’ve been closer to an X rating 10 or 15 years ago. The sexual content is pervasive, and I’m going to be very careful in describing it.

Several women and men are seen nude, both up top and from behind, for extended periods of time. Sex is portrayed almost to the point of being explicit, once in a scene between a married woman and several men, and, in another instance, between two men (one of whom is an invisible ghost). Malcolm and Kisha have neighbors who are “swingers” (couples that engage in sexual activity with others openly) and make it disgustingly clear every moment they’re onscreen, whether it’s slyly referring to something they’ve done, or inviting someone to join them.

Fortunately, Malcolm and Kisha find their lifestyle repulsive, but that minor redeeming value isn’t enough to counter how gratuitous the sexual content is. I don’t want to go any further into it, for your sakes, and I certainly wouldn’t recommend this film for Christians. It disappoints me to have to say that, because there are some really funny parts, but there’s more sexual filth to be seen than laughs to be had. And, frankly, if we can avoid it, Christians are better off not exposing themselves to things of this nature. I’m pretty tolerant when it comes to movies, but even I felt like taking a long shower after this one.

My advice is to skip it.

Movie Critics
…a joylessly raunchy comedy… not only dumb, but dull. It’s like watching a snuff film, only it’s the audience who’s dying inside. …

Kimberley Jones, The Austin Chronicle
…Seriously, who wrote this stinker?…

Rick Groen, The Globe and Mail
…the result features around 1,783 too many fart gags, to be fair, it also boasts a couple of genuine minor scares. Although there’s no doubt that the film’s most horrible sight is a way-too-long shot of Swardson’s naked rump. … [B-]

Clark Collis, Entertainment Weekly
…What becomes clear early on is that horror-movie conventions aren’t the source of A Haunted House's “humor” so much as Wayans’s ability to scream in a high-pitched voice and get disgusted when Kisha farts in her sleep. Nearly every one of these would-be jokes is painfully drawn-out, with several scenes seeming to act as their own blooper reels. … [1½/4]

Michael Nordine, Slant Magazine
…The hit-to-miss ratio is less than impressive throughout “A Haunted House,” a frenetic and freewheeling satirical comedy that only sporadically scores a bull's-eye while aiming at easy targets: found-footage thrillers in the vein of “Paranormal Activity,” “The Devil Inside” and the granddaddy of them all, “The Blair Witch Project.” Clearly aimed at urban ticketbuyers, and heavily reliant on humor involving African-American slang and stereotypes…

Paul Asay, Plugged In
Comments from non-viewers
Negative—I see there aren’t any reviews, so I guess that means the movie was so bad to the point that nobody watched it? That could be possible. All comedy is basically the same nowadays: crude, sexual and offensive. I saw the previews, and I can tell this film has its share of drug jokes, sex jokes, and some weird voodoo practices. The Wayans brothers are funny, but one thing I never understood about their movies is their use of bodily function jokes. I’m sure a movie can be funny without having to listen to someone break wind in a bathroom, or something else cringe-worthy along those lines.

Aside from all of that, exorcism and other devil related things will offend Christians. My advice is to skip this one.