The Theory of Everything

for some thematic elements and suggestive material. 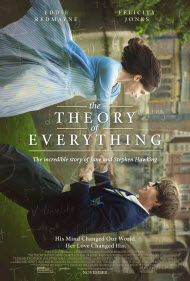 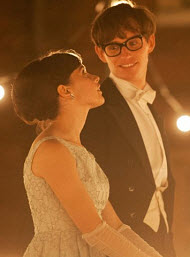 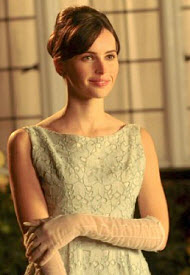 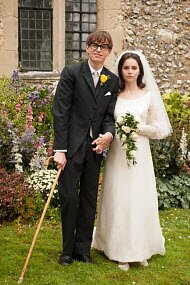 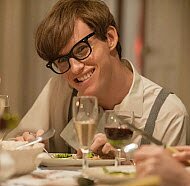 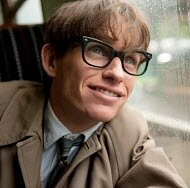 “Stephen Hawking: Is there meaning to life?”

“Stephen Hawking’s end of the universe”

“Curiosity: Did God create the universe?”

“The extraordinary story of Jane and Stephen Hawking”

“The Theory of Everything” is the true story of the world-renowned physicist Stephen Hawking and his wife Jane. The film opens during the time Hawking is attending Cambridge University and trying to choose his area of focus within the realm of physics. He meets Jane (Felicity Jones of “The Amazing Spider-Man 2”), an art student, and they quickly fall in love despite the differences of their beliefs. Hawking is a pronounced atheist, seeking to find the one equation that will explain everything in the universe, while Jane is a member of the Church of England.

It is while attending the university that Hawking begins to experience unusual physical symptoms and is then diagnosed with a debilitating disease affecting muscle control, a form of ALS. He is told he may have only two years to live and over time will lose more and more of his ability to move and function. Through the pursuit of Jane and the encouragement of his friends and professor, Hawking presses through and continues to pursue his dream of earning his PhD. He and Jane marry and begin a family, and the film shows the personal struggles they go through as Hawking’s physical state steadily declines. At the same time it portrays the physicist’s triumphs as he is internationally recognized for his revolutionary theories in his field and even writes his first book having to do with his chosen focus: time.

Overall, this movie mostly avoids sexual content, language and violence, which I found refreshing. There are a couple brief conversations that mention sex, there is one “damn” and virtually no violence. There are three or four scenes where couples are seen kissing, but nothing more. In one scene, a couple pages of a magazine are shown depicting scantily clad women. There is a scene where adultery by Jane may be implied, but it isn’t clear whether it actually happened. Thematically, the film has a few minor instances that may bother some people—a needle being inserted, coughing up blood, and the beginning of a surgery. These scenes are all brief, and they don’t show a lot. There are three or four scenes where characters are shown drinking or drunk.

I found this film very engaging; it draws the viewer into the lives of the characters from the start. I am quite impressed with the quality of the writing and the moviemaking, and especially the acting. Eddie Redmayne (“Les Misérables”), who plays Stephen Hawking, does a tremendous job in this difficult role. It is almost worth seeing just for his performance. All the other supporting actors are great, as well. This is a wonderful biographical film mainly geared towards the adult crowd and is a good one for producing some interesting dialog afterward. I wouldn’t say it pushes any one idea or philosophy—it just gets you to think.

As many people are aware, Stephen Hawking is an atheist. I found myself, at the beginning of the film, wondering how he was able to cope with his disease having never believed in God. The movie shows that he attributes his ability to press through and keep a good attitude to the love of his wife and family, as well as his endeavors to contribute his expertise to the world. He says at the end, “Where there is life, there is hope.”

I found this interesting, one of those lines to mull over a bit. It is not untrue; however, the thought still leaves God out of the picture. Stephen Hawking has spent his life in pursuit of that single simple equation that will explain everything naturally, and while he may have hope because of the incredible contributions the human race is capable of, but the question still remains: what is the source of that hope? Who gives us these abilities? Who holds us through all of our hardships? Who is still there when we lose everything? My hope is that one day Hawking will discover the reality and love of God, the true replacement for that elusive equation.

I liked Jane’s role in the film, especially after Hawking is first diagnosed. He has this moment where he is giving up on himself and pushing people away, but Jane pursues him, loves him, and supports him through everything. To me, her faithfulness is like how God is with us. Though we give up on ourselves, God never does, and he doesn’t leave us in our weaknesses. Of course, as humans, we are flawed and limited, and so Jane does the best she can until it eventually seems to become too much for her.

Note: Jane and Stephen Hawking divorced in 1995 after 30 years of marriage. Stephen left Jane for his nurse, who he then married and later divorced.

See: “Stephen Hawking: the closed mind of a dogmatic atheist” (a review of Music to Move the Stars by Jane Hawking)—Note: “Although many other women might have left Stephen because of his intolerable attitude toward her, and especially what she represented, she stuck by her husband through everything. It was he who left her for another woman.”

I would definitely recommend this movie to those who enjoy biographies. It stimulates some good topics of discussion and provoking thoughts and may incite some people to evaluate and perhaps solidify what they really believe. There is, of course, some content to be aware of for less mature audiences, but, overall, I give the movie a thumbs up!

Positive
Positive—I am very happy to have seen this movie. As your reviewers states, the performance by Eddie Redmayne, playing the role of Stephen Hawking, is very much worth seeing. It is a brilliantly executed portrayal of an extremely physically disabled person. I did wonder how the subject of religion would be handled, since it is public knowledge that Stephen Hawking is an atheist. However, the screenplay did the matter justice by not oversimplifying the subject, but showing how complex a question it is even for Hawking.

Despite his claim that there is no God nor need for God, his intellectual goal is to find the ultimate answer to existence and how life came into being, and he is still searching! The story is also a wonderful testament to the love of Hawking’s wife, Jane, and how she helped him survive beyond the two years that were the original prognosis for his continued life.

Beautifully filmed, beautifully acted, impeccably directed, this is an excellent feature film. I highly recommend this movie to any Christian who wants to see a well-made biopic of the life of an unusual human being, who just might find God after all. We don’t know. He has outlived all his prognoses.
My Ratings: Moral rating: Average / Moviemaking quality: 4½

Halyna Barannik, age 68 (USA)
Negative
Negative—Stephen Hawking was famous because of his scientific achievements, but this movie covers them in vague generalities, while detailing the minutiae of the gradual erosion of his marriage. It was gut wrenching, and left me depressed.
My Ratings: Moral rating: Offensive / Moviemaking quality: 2