for some strong risqué sexual content/graphic nudity, and for language and drug use. 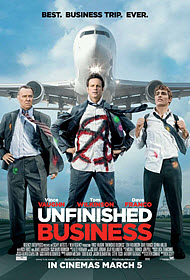 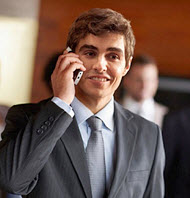 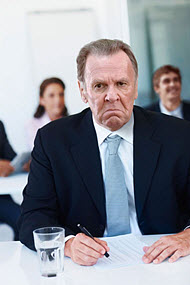 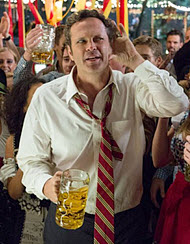 What is goodness and righteousness?

Oh, where to begin. New business buddies Dan (Vince Vaughn), Tim (Tom Wilkinson), and Mike (Dave Franco) are trying to land their first big business deal as employees of their newly founded business Apex Select, a metal manufacturing company. Upset with his former boss, Dan quits his job to found Apex Select. However, things do not go quite as planned, as he only has the two employees and cannot land any business deal opportunities, that is, until a year later.

The adventure begins for the three businessmen as they take their very first business trip to Portland. However, Dan’s former boss is also trying to close a deal with the same business he is trying to work with. From Portland to Berlin, competition ensues, and Dan and company must find a way to get Apex Select off of the ground and establish themselves as strong independent businessmen. The business world is a rough place, and these three businessmen begin to realize that there is a lot more to running an independent company than they thought.

“Unfinished Business” is deemed as a comedy. However, I found myself hardly laughing during its 90 minute runtime. The jokes are weak, the writing is poor, and the actors are completely misguided by director Ken Scott. If the film did not have the power of Vince Vaughn’s performance, this would definitely have been the worst film of 2015, thus far. Sure, it is a good premise, but it is so poorly executed that half the time I was trying to figure out where the laughs were supposed to be. Not only that, but some of the “humor” is just down right disgusting. What could have been a funny story about three guys forming an independent company and selling a business idea falls completely flat with its very weak and pointless storytelling. The story itself never really takes off.

There is a lot of film content to dislike here. Please be forewarned, this film contains strong sexual content and graphic nudity including both full male and female nudity (in more than one scene), two brief graphic sex scenes with near full nudity (including graphic sexual positions), and plenty of sexual references. There is a reference to masturbation, a visible erection through a man’s clothing, mentions of oral sex, talk of prostitution and loss of virginity, and numbers of topless women. One scene even takes place inside of a gay bar. More can be discussed, but I’m sure you get the general idea of the abhorrent sexual content within this film.

The violence is very mild with one minor scuffle, some protesting/rioting, a car flipping over (comically and bloodless), a drunken slapping contest, and a few characters getting tear gassed (again played for laughs).

The language is strong including over 40 f-words, 15 S-words, around a dozen combined uses of a**, d**n, b**ch, and h*ll. God’s name is misused around half a dozen times (mostly paired with d**n) and a large handful of crude references to both male and female anatomy.

Alcohol consumption is limited to pretty much one party scene, where many characters drink hard liquor. Wine is also consumed briefly in a few other scenes. A bong is smoked in one scene, and a drug deal also briefly takes place. We later see characters consuming the drug (presumably ecstasy). We later see the effects of the drug.

It should also be mentioned that there are some jokes about obesity and that a character also makes fun of the size of his wife. Although this same character admits that his life is a mess, he still wishes to pursue a divorce without trying to make things right. A child also waves her middle finger in a scene and clubbing and partying is condoned in this film.

However, I was still able to pull some positive messages from this flick, including some strong family values and sticking up for and supporting the ones you love. Bullying plays a key theme in the personal family life of Dan (Vince Vaughn), as his son is bullied at school for being obese. Dan is an encouraging father that frequently video chats with his family while on the road and does what he can to keep them all encouraged. He longs for a joyful future and is determined to reach his goals in life while supporting and making his family his top priority. Dan likes to pretend to “freeze” during his video calls in order to prevent answering any tough questions, but he later realizes that he needs to man up and “not freeze today” by taking on life’s challenges, both in and outside of the business world. Dan is the perfect life example of one who procrastinates on life’s toughest moments, so he “doesn’t have to deal with things right then”.

“He must manage his own household well, with all dignity keeping his children submissive…”

This verse applies to Dan as he is clearly seen as a family man. “I have fought the good fight, I have finished the race, I have kept the faith” (2 Timothy 4:7). As mentioned above, Dan is a man that is full of determination and does not give up without a fight. He wants to support his family, will not give in to disappointment, and perseveres through even the toughest of trials (including being put on display as “art” in a museum window!).

However, immoral lifestyles are glorified, and money is also idolized in “Unfinished Business.”

“For the love of money is a root of all kinds of evils. It is through this craving that some have wandered away from the faith and pierced themselves with many pangs.” —1 Timothy 6:10

“He who loves money will not be satisfied with money, nor he who loves wealth with his income; this also is vanity” —Ecclesiastes 5:10

Of course, everyone wants to make some sort of living, but the love for money exceeds the grasp of the business world within this film.

“Flee from sexual immorality. Every other sin a person commits is outside the body, but the sexually immoral person sins against his own body.” —1 Corinthians 6:18

“For the drunkard and the glutton will come to poverty, and slumber will clothe them with rags.” —Proverbs 23:21

Sexual immorality, homosexuality, drunkenness, drug abuse, and partying are all glorified in this film and displayed without any consequence. God’s Word is clear that these acts of immorality are detrimental to one’s life. However, “Unfinished Business” displays just the opposite.

Although “Unfinished Business” contains some positive messages, it is a film that I strongly recommend that you take a pass on. Not only is the film’s content extremely offensive, but the film itself is not entertaining in the slightest. Surely you can find stronger messages about family values and dedication in another film (preferably one not rated R). “Unfinished Business” is a lazily made feature that wastes its talent on sick, perverted humor and poor screenwriting.

I’m not quite sure how this film was approved for production, but it will definitely be forgotten on dusty store shelves in no time. Hopefully, talented actors like Vince Vaughn will try to find better work in their acting careers before they completely ruin their reputations. Sure, “Unfinished Business” has some good intentions (in terms of storytelling) and a funny concept, but it falls hard on so many levels. If a film is labeled as a comedy and cannot make one laugh even once, obviously there is something wrong with the source material. Hopefully, director Ken Scott and the team at 20th Century Fox learn their lesson. “Unfinished Business” is most certainly a film that should have been left unfinished and should be avoided by audiences at all costs.

“No one can serve two masters, for either he will hate the one and love the other, or he will be devoted to the one and despise the other. You cannot serve God and money.” —Matthew 6:24

Gary Goldstein, Los Angeles Times
…shocking lack of jokes …At times so shoddily made you’d swear it was actually unfinished… [2/5]

Jon Frosch, The Hollywood Reporter
…should file for comedy bankruptcy… [1/4]

Kyle Smith, New York Post
…Not without charm, “Unfinished Business” mixes the cute with the raunchy. Penises adorably happen. …there’s a subtext about how-did-I-get-here lives, and righting oneself before it’s too late. … [2½/4]

John Hazelton, Screen Daily
…flounders as a weak comedy… aims for laughs with nudity, gambits in a gay bar and a mismatched trio of business travelers. … [1½/4]