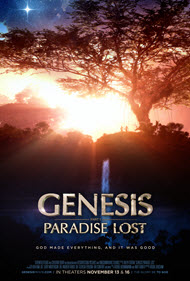 See Christian Answers’ information on Creation/Evolution. The Creaiton SuperLibrary is provided by a top team of experts from various respected creationist organizations who answer your questions on a wide variety of topics. Multilingual.

Here’s what the distributor says about their film: “If there is one part of the Bible that has undergone more scrutiny and abuse than any other, it is the very beginning-GENESIS. Both from within and without the church, assaults on GENESIS continue to question the Creation and ultimately the Creator. So, what exactly happened at the ‘Creation,” at the ‘Beginning?‘ Creation Today and Seven Fold Films is proud to announce that for the first time ever, using stunning visual effects and the latest in scientific research, GENESIS will come to life right before your very eyes. We have heard the phrase ‘In the beginning‘ many times; now we get to see it on the big screen.

So what exactly happened at ‘Creation,” in the ‘Beginning”? Enter GENESIS: PARADISE LOST! Cutting-edge cinematography meets proven science and biblical accuracy, bringing the first book of the Bible to life in both 2D and 3D formats on the big screen. Stunning visual effects and field research invite audiences to explore the much-studied and debated opening chapters of the Bible.

GENESIS: PARADISE LOST will entertain and educate as an event for the whole family. The digital animation is interwoven with insightful commentary from accredited scientists and educators such as Dr. Charles Jackson and Dr. Georgia Purdom, and popular speakers such as Ken Ham and Ray Comfort. Cultural apologist Dr. Voddie Baucham, Jr.’s deep booming voice serves as Genesis’ “unseen narrator” whose vocal presence gives the visual images deeper meaning and life.

As a bonus, this Fathom event features an exclusive panel discussion with leaders from both the science and faith communities. Moviegoers throughout the U.S. can enjoy the event in more than 700 theaters, with select locations offering the film in RealD 3D.

Wow, just wow was this movie good. From the excellent apologetics to its 3D and visual effects. The movie literally takes the book of Genesis and brings it to life on the big screen. And they literally start from verse one.

The amount of care the producers put into this, by making sure it is faithfully accurate to the Bible, is quite evident.

The film includes a well-rounded team of scientific and apologetic experts who clearly know what they’re talking about. There are so many fascinating things that they reveal in debunking the theory of Evolution. Yes, I said theory, because Evolution is not a scientific fact or a scientific law of nature. This beautiful documentary discusses the absurdity of the idea that life spontaneously generated itself from non-living matter. Many striking scientific evidences show that the theory of Evolution is unscientific, untestable, not repeatable, and violates basic laws of nature and physics.

“Genesis: Paradise Lost” discusses many things that Evolutionists and Atheists frequently present as evidence, such as the ape “Lucy” and show how very different the skulls and brains of humans are from apes.

You have to see this movie for yourself! I am very excited and inspired by both the evidence, the biblical insights and the beautiful presentation.

In addition to the distinguished men of science, there is the added bonus of listening to two popular and articulate apologists in defense of the Christian faith—Ken Ham and Ray Comfort.

As an independent film venture, the producers are hoping that followers of Christ will respond to this viewing opportunity, to make GENESIS: PARADISE LOST into a groundbreaking success worth repeating. “All things are possible with God,” and this rare film honors Him by striving to faithfully relay His story. “So bring family, friends, neighbors, skeptics… all are welcome!”

Positive
Positive—Excellent! Great information accompanied by visually appealing cinematography and incredible CGI. The interviews were interesting, concise and thought provoking. Exceptionally good production value. The theater I went to showed it on two screens and both were full. Looking forward to the DVD, because there was so much information and examples we will pick up more with multiple viewings. Also, looking forward to Part 2!
My Ratings: Moral rating: Excellent! / Moviemaking quality: 5

Tori, age 40+ (USA)
Positive—I saw this film last night in a sadly mostly empty theater. Having studied and learned about creationism for most of my life, much of the information presented by those in the movie I’d heard before. However, it was still a good refresher course with sequences of 3D CGI recreations of Genesis chapter 1 mixed in.

I give the movie a 5 for quality, because, as far as Christian presentations of the Bible go, this is one of the most unique and ambitious works ever put out.

Great respect is given to God’s Word in maintaining strict accuracy in portraying the creation of the universe. Voddie Baucham did a very good job narrating, too.

I give an excellent moral rating because this movie contains no content of concern for Christians. The creation of Adam and Eve is done in a very tasteful manner, with carefully placed bushes, distant, shadowy imagery and a blurred water shot all used to maintain the modesty of the necessarily naked characters. There is no violent or profane content whatsoever and sexual intercourse is not implied or shown in any way.

The only thing that disappointed me personally was the poor turnout at the theater I went to. I went with a few friends, and it was sad to be the youngest people in attendance. Unfortunately, the issue of creation and the Genesis account is seen as unnecessary and irrelevant to many Christians my age, leaving me with a feeling of alienation. I fear that most of these young Christians do not understand the logical ramifications of their noninterest, nor the effect it can have on their belief in the infallibility of God’s Word.
My Ratings: Moral rating: Excellent! / Moviemaking quality: 5

Tim C., age 22 (USA)
Positive—The picture quality could have been better, but the volume of scientific information in support of the existence of an intelligent designer (God) was incredibly high. Can’t wait to buy the DVD, because watching this once isn’t gonna cut it for me. This movie was amazing.
Aisha Davis (USA)
Positive—My husband and I saw the movie tonight with my parents in a sold-out theater We thought it was very well done and loved all of the scientific evidence presented! May hearts be stirred as people hear the truth, not only about creation, but about the salvation provided through Jesus Christ. Thank you for clearly presenting the gospel as part of this movie! …We would love to get a copy to share with family and friends, and to also possibly show this at our church.
Cheryl Tooke (USA)
Positive—Just got home from watching it and am telling everyone that they have to go see it!! It was such a huge encoragement for me!!!! Going back to see it again on Thursday!
Liz Maria (USA)
Positive—This movie was awesome.
My Ratings: Moral rating: Excellent! / Moviemaking quality: 5

Charlene (USA)
Positive—I found the movie true to God's Word and very educational. I believe very young children might not understand a lot of it, however. Also, I expected it to be more of a movie than a documentary, by the advertisements I saw, so that was a bit disappointing. I got 3D glasses, but found the special effects unrealistic, so I could have watched it non 3D. That being said, I was glad to see the 3D ablility in such an educational Christian film!

The theater was mostly empty, which was very sad. I think it did not get enough advertising. None of my friends had even heard of it, no one at my church even. I would have liked to have brought some unsaved people to it, but at $16.00 a ticket that was impossible.

Keep movies like this coming, however, more ‘MOVIE’ would appeal to a wider range of people than a documentary and reach more souls, in my opinion. Just keep the truth in it when you do.

All in all, I'm very glad I saw it, just wish more people had.
My Ratings: Moral rating: Excellent! / Moviemaking quality: 3½

Laurie, age 61 (USA)
Positive—Around 2003 I started following this project for a 3D movie on creation. I was excited back then because 3D was not so mainstream. It took so long to make (like waiting for James Cameron) that I knew it would be good.

The 3D is excellent and makes things jump out at you. The questions and answers about creation are very well done. If you watch this movie, all your major questions about creation vs. Evolution will be answered. It is Biblically accurate and eternally inspirational. I learned a lot, even being a big student on the subject.

I highly recommend you see this movie and make every effort to show it to anyone who has questions about creation and evolution.
My Ratings: Moral rating: Excellent! / Moviemaking quality: 5