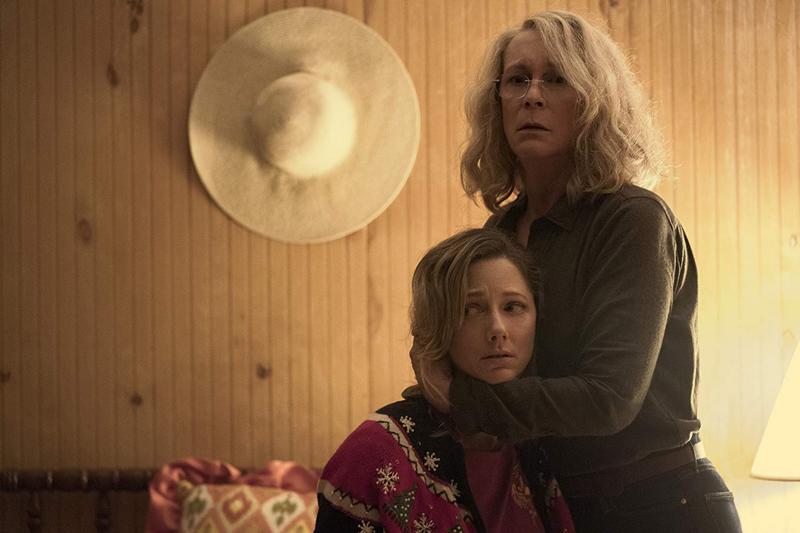 for horror violence and bloody images, language, brief drug use and nudity. 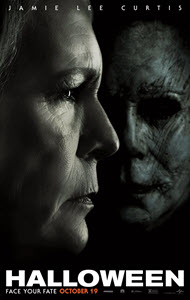 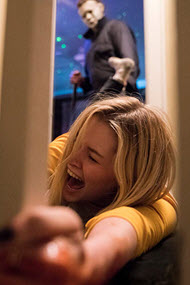 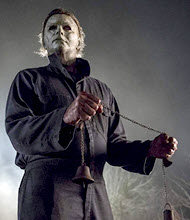 What are the mental and emotional effects of viewing very violent, bloody, gory movies

Mother and daughter bond broken by holding on to obsession, fear and hatred 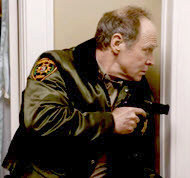 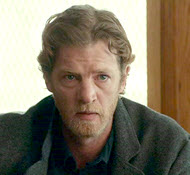 It’s been 40 years since the infamous, cold-hearted, serial-killer Michael Myers murdered Laurie’s (Jamie Lee Curtis) 5 friends on Halloween Night, October 31, 1978 in Haddonfield, Illinois. No, he didn’t escape and wreak havoc in those really awkward sequels over the past 40 years. For continuity purposes, let’s say the “REAL” Michael Myers (as I think those others were just phonies) has been quietly locked in a mental-health rehabilitation facility for criminals. For the past 40 years, Michael still hasn’t said a word. Not…one…word. Two hard core podcast journalists really want to know why, though, and get Michael Myers’ side of what happened. Little do they realize how little a spark is required to make a fire…

Enter our heroine, Laurie. Laurie hasn’t moved on since the events from 1978. Oh sure, she’s been through two marriages, had a daughter that was taken away from her due to her “unfitness to parent” and even a grand-daughter, Allison. Yet, still, Laurie’s PTSD (post-traumatic-stress-disorder) has led to a life of preparation in hopes that Michael someday returns. “I’ve prayed for 40 years that Michael escaped so that I can kill him myself,” she says. Careful what you wish for.

For indeed, during a prison transport, Michael DOES escape to return to his home, his killing playground of Haddonfield. It’s Halloween in Haddonfield. Lock your homes down. There’s no treat tonight…

Okay, it goes without saying, as stated before, this new “Halloween” has absolutely nothing to do with any of the sequels that came after the original 1978 Halloween. Nothing. For those who are a fan of the original, or who even were slightly intrigued by the first film (such as myself) that’s a good thing, as I feel that even remotely tapping into the sequels would have ruined the essence of the 2018 “Halloween.”

What made the original “Halloween” film iconic, as had the original “Friday the 13th” (as I read in articles and had spoken to those who remember when it came out after having viewed both films recently), is that these films would lead the way for the horror films that would come to follow. Eventually, though, because these slasher films were so revered by some, the desire to be EXACTLY like them led to copycats in one way or another, whether it was the “Halloween” sequels or other films that followed.

I state all this as a point of reference to that fact that the 2018 “Halloween” is the truest and best sequel to the ORIGINAL and is the only film that has the right to be considered a real sequel. There are even some interesting homages to the original that put an occasional smile on my face (you have to pay attention though, as they are quick). If it weren’t for the obvious in your face extremely graphic violence, I would say this is a tribute to the “Halloween” franchise. The pacing never slows, the character development and performances are strong in every aspect (apart from Judy Greer’s performance. Her character is just childish and dismissive, which got to be annoying).

That’s not to say, “Halloween” isn’t without its caution, and trust me, there is a LARGE amount of it to come…

* Warning: Please be aware that the content below details some graphic violence. Spare yourself by consulting this list only if you are actually making a decision about viewing this film. *

Violence: Extreme and brutal. Horridly, viewers witness a young child being strangled to death from behind by Michael (I mean, really, do children have to die on screen?). We witness a male corpse whose neck is seen twisted. We also witness a male corpse with his jaw ripped open and blood pouring out. Someone’s hand is partly blasted off by a close-range shotgun. A character is graphically thrown against walls and beaten to death by Michael. Michael strangles the life out of a female character. Michael bludgeons someone to death. Michael stabs someone in the neck to death. A character is stabbed and hung against a wall. Another teenage character is stabbed in the back and skewered through a metal gate (we see his body impaled). Another character is stabbed, and another’s face is smashed against the wall. Michael stomps on a person’s face to the point where it is completely squished (we see the results, innards and all). A police officer is stabbed to death in the neck. A character is pushed off a balcony, and another is incinerated in a fire.

Sex/Nudity: There is a flashback to a scene the 1978 “Halloween” film in which Judith is being murdered by the young Michael Myers. Judith’s breasts are fully exposed twice in this scene (once from the side and one as she is dead, flat on the ground). Two teenagers begin to have sex, but are interrupted. Couples kiss. One female is shown in a “sexy nurse” costume. A female is seen on the toilet (nothing graphic is shown).

Other: Teenagers talk about how they have gotten drunk at a party. There is talk of smoking pot. Michael Myers drops someone’s teeth over a bathroom stall before attacking the victim.

Laurie is obsessed with her past and seems unable to move forward. She does not seek to find strength through Christ to get through the pain of the past. The bond between Laurie and her daughter is broken. Although Laurie lost her due to her obsession over Michael’s return, Laurie’s daughter could have tried harder to forgive her mother and help repair their relationship.

Yet the theme I really want to focus on is fearing evil and the Evil One. Michael Myers, wholeheartedly, represents pure-unadulterated evil in the film—and what ultimately happens when the Evil One takes hold of one’s life. Yet, we as Christians never need to fear evil or the Evil One, so long as our strength and our trust relies solely on the Lord Jesus. The Bible says:

Do not be wise in your own eyes; fear the LORD and shun evil. -Proverbs 3:7

We know that we are children of God, and that the whole world is under the control of the evil one. —1 John 5:19

Flee the evil desires of youth and pursue righteousness, faith, love and peace, along with those who call on the Lord out of a pure heart. —2 Timothy 2:22

But the Lord is faithful, and he will strengthen you and protect you from the evil one. —2 Thessalonians 3:3

And as the Lord spoke to the prophet Isaiah:

So do not fear, for I am with you; do not be dismayed, for I am your God. I will strengthen you and help you; I will uphold you with my righteous right hand. —Isaiah 41:10

Although this film has some slick cinematic qualities (writing and performances), this does NOT mean it is worthy of viewing. I saw teenagers in the theater tonight, which I thought was very inappropriate. There is far too much extremely graphic violence—much more than there ever was in the original—enough to make me a little nauseous this evening. This, plus the graphic nudity and frequent bad language, most assuredly make this film unacceptable for viewing by any audience, Christian or otherwise. Save your money.

Neutral
Neutral—This film is shockingly violent. That said, it is a very good sequel to the original (which is mild by comparison—although would not have been in 1978!) and the battle between Laurie and Michael is good thriller stuff!

If I can state anything good about the film, it’s that it really gives no room for having any respect toward Michael Myers at all—you are most definitely looking forward to Laurie winning the battle… remember, Michael’s character is not just a psychopathic serial killer—he’s more like an embodiment of evil itself (similar to No Country for Old Mens, Chigurh)—in that way, it is easier to despise him, his behavior and see him meet his demise. In a world climate where a lot of “good” in films is actually evil masquerading as good, it was strangely satisfying to see evil portrayed as just plain evil—no excuse for him to behave that way (like a rough childhood etc.), not an atom of good in him at all throughout the whole film!

I believe the violence is too much (two scenes in particular) but there was less nudity than the original had (and it is a flash-back scene to the first film where it is briefly seen) but much more foul language (there are worse movies for language, but it was there fairly often). There are no sex scenes at all (there is a couple of teens passionately kissing on top of each other on a couch but it doesn’t go anywhere).

This is not a movie for everybody and I confess, the only reason I went to see it was nostalgia for the original; it was a “good” movie but excessively violent!
My Ratings: Moral rating: Offensive / Moviemaking quality: 4½

Secular Movie Critics
…what Carpenter did do was equate sex with violence, a connection that Green has elaborated on with a more feminist streak… pumps more blood into the story, both literally and figuratively… can’t re-create the eeriness of Carpenter’s original…
Jake Coyle, Associated Press
…[Director] Green has a good bit of fun with inside jokes and boundary-pushing kills (should we be laughing while that character we like is begging for her life?), and offers more than a couple of gleaming kitchen knives… this Halloween ends in a blaze of glory.
John DeFore, The Hollywood Reporter
…more gruesome yet much less scary… a straight-up sequel, a rematch between heroine and villain. This isn’t a wisecracking, tongue-in-cheek picture: Green wants us to believe in his Bogeyman, and Curtis is his ace card. …
Jeannette Catsoulis, The New York Times
…best “Halloween” film since the original… [4/4]
Colin Covert, Minneapolis Star-Tribune
…the new “Halloween” evokes the genius and dumbness of the original… After a purposefully slow start, the movie builds and becomes relentless. …
David Edelstein, Vulture, New York Magazine
…The latest entry in the Halloween series was probably always a fool’s errand, yet its myriad failures are still shocking given the talent involved. …
Keith Uhlich, Slant
…This sequel can’t compare to John Carpenter’s ingenious 1978 original, but director David Gordon Green delivers a crowd-pleasing chiller that doubles as an existential commentary on horror itself, both on the screen and in our lives. Led by an intense Jamie Lee Curtis reprising her role 40 years later, this “Halloween” is more tonally nuanced than its predecessor, if also more uneven. …
Tim Grierson, Screen Daily
… By staying true only to the initial narrative, this “Halloween” solidly ranks as the best chapter since the first—not exactly the highest bar…
Brian Truitt, USA Today
…slick and sick, but little is left of that sleep-destroying dread…
Anthony Lane, The New Yorker
…the much hyped face-off between two old foes is frustratingly routine… [2/5]
Benjamin Lee, The Guardian [UK]