for thematic material including violent images. 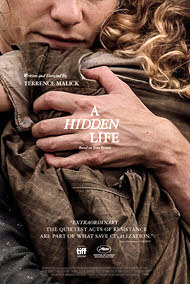 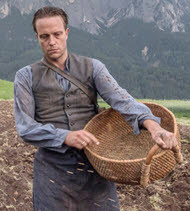 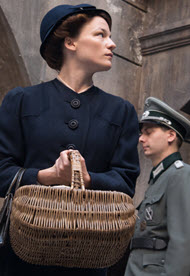 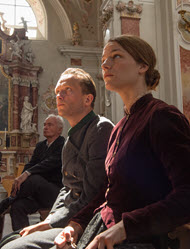 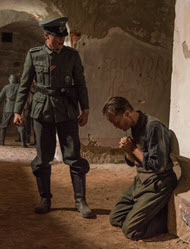 Doing what is right, even when it means arrest and even death

People who refused to serve the Nazis 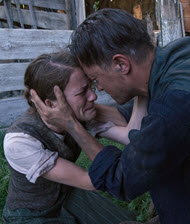 Generosity / giving one’s food to someone else 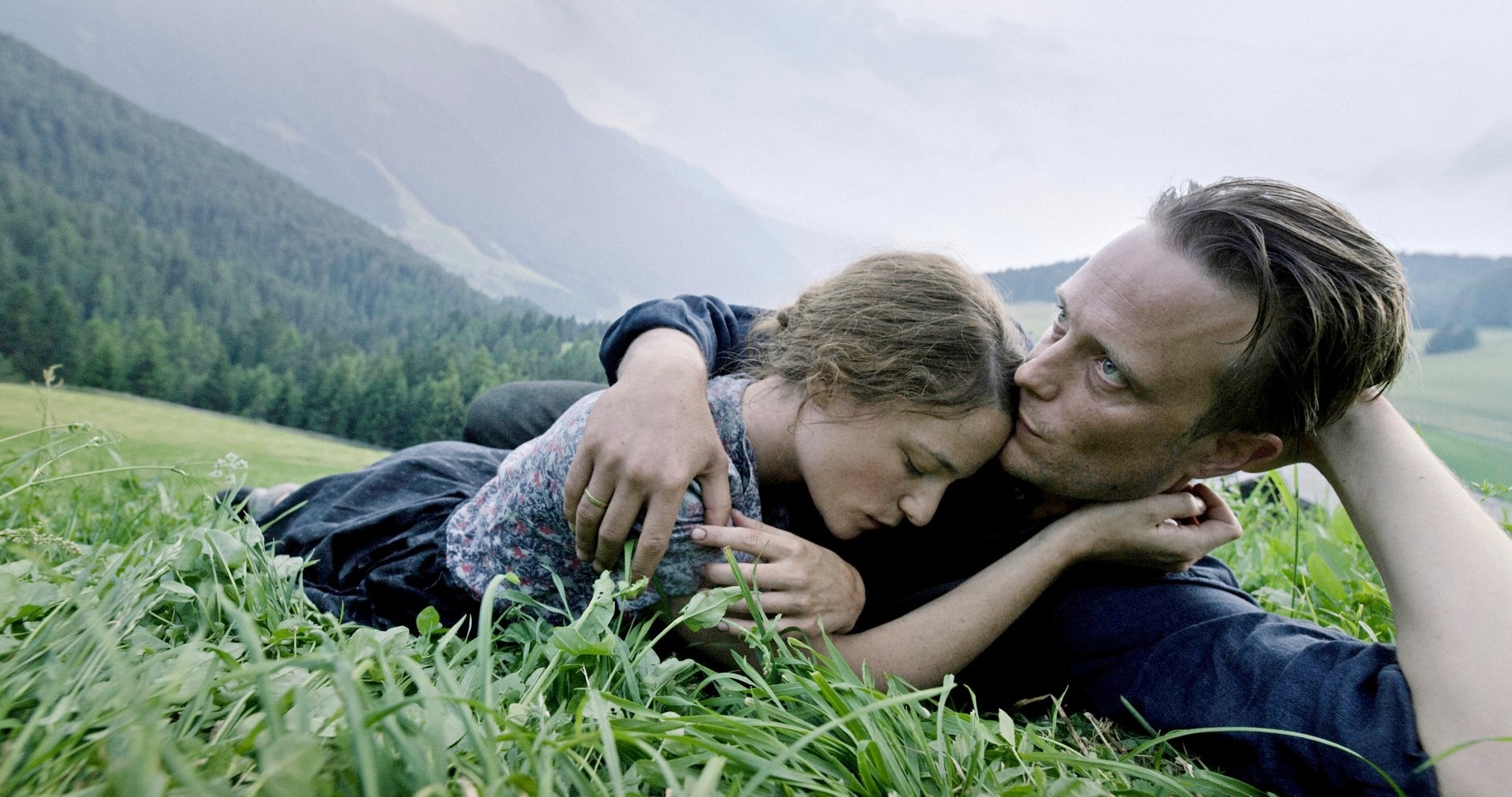 You can feel the dirt under their fingertips… the cold, wet soil beneath the green grass of the picturesque mountainside. You can feel the baby’s small fingers touching her father’s chin as he holds her close to his face… scratching the stubble of his unshaven cheeks. You can even feel the weight of the plow on their shoulders as they prepare to sow the field… breaking the ground that will house their crops in the spring. Unfortunately, I did not feel the emotional weight, the unfathomable burden placed on the war-torn family at the center of Terrence Malick’s historical drama “A Hidden Life.”

Franz Jägerstätter (August Diehl) is a peasant farmer in the mountains of Austria in the early 1940’s. He lives a quiet and humble life with his wife, Fani (Valerie Pachner), and daughters. As the Nazis move across Europe during WWII, Franz is called to serve in the German army and pledge his allegiance to Adolf Hitler. He knows the Nazis are wrong. They are taking innocent lives and occupying peaceful countries. Franz cannot support these actions of his motherland. He refuses to fight for Germany. As a result, he and his family become ostracized by their own neighbors… his wife spat upon, his children harassed, and his livelihood in ruins. Seeking counsel from his community, his Catholic church, and God; Franz surrenders himself to German authorities. Placed in prison, Franz awaits trial for treason as Fani tries to manage their farm without him. Isolated in his cell and tormented by guards, Franz must decide whether to be enslaved by his virtues or freed by the evils of men.

This is my third experience with director Terrence Malick—having previously watched “The Thin Red Line” and “The Tree of Life”… which was recently declared the best film of the decade by the Associated Press. At times difficult to digest, his films certainly stand apart in today’s cinema. He is the most tactile director I have come across… allowing me to feel through the screen—the textures of fabrics, the warmth of skin, the grass under my feet. He often drives the narrative through whispers off-screen, visions of memories, and multiple perspectives in singular scenes. He allows you to experience the unfold rather than follow it from a distance.

In “A Hidden Life,” the ideas of good and evil are thoroughly examined. “The sun shines on both the good and evil…” one character states. “No one is innocent,” claims another. Franz is constantly told that his sacrifice will benefit no one, and that he can’t change the world… the world is stronger. And yet, he is kind despite this persistent discouragement. Through everything, Franz and Fani have hope in God and in His plan. After all, in Romans 5:3-4 (NIV) clearly explains, “…we also glory in our suffering, because we know that suffering produces perseverance; perseverance, character; and character, hope.”

For me, this is where “A Hidden Place” falls short. The HOPE they speak of seems absent from the film. For all the palpable feelings Malick brings to the screen, he is unable to generate feelings of hope. There is kindness, gentleness, and grace, but it all seems futile… a common theme through the Malick films I have watched. Nothing matters. Like the artist painting in Franz’s church—he paints suffering but experiences none of it. He profits from the suffering of others comfortably behind his paint brush.

I know what it is to have hope. I understand hope. My hope is in Christ.

Yes, my soul, find rest in God; my hope comes from Him. Truly He is my rock and my salvation; He is my fortress, I will not be shaken. My salvation and my honor depend on God; He is my mighty rock, my refuge.” —Psalm 62: 5-7 (NIV)

Once you experience hope through Christ, that hope is irrepressible.

“Now faith is confidence in what we hope for and assurance about what we do not see.” —Hebrews 11:1 (NIV)

Where this film fails to demonstrate hope, it succeeds in its relentless heartache. Franz must separate from Fani in a heartbreaking scene that took my breath away. His daughters miss their father and the peace of sleeping next to him at night. They don’t understand why he had to go away. Franz’s interactions with fellow inmates is tender but agonizing. The pain this family goes through is excruciating and powerful—making “A Hidden Life” very difficult to watch… especially for sensitive viewers. Even though the film is void of bad language, sexuality, or drug use; the thematic material is relentlessly heartbreaking and disturbing. There is some violence, but it is minimal… yet effective.

“A Hidden Life” is based on a true story, and I truly love the message it’s trying to make—conviction, perseverance and hope. Sadly, these positive attributes are silenced by the heartache. At one point in prison, Franz declares, “I am free.” I don’t think he believed it and neither did I.

Positive
Positive— Terence Malick films tend to be more rhapsodic than dramatic, and I often come away from them wondering what the point of all those long tracking shots, dream-like vistas, lingering close-ups and interior monologues were all about. But not with this film. Yes, all those things are present in “A Hidden Life,” and could have been pared down, but, for once, Malick brings his trademark elements together in a way that weaves a taut narrative while it pulls at the conscience. Malick never lets the viewer off the hook; he engages us in a moral dilemma that gnaws and scratches, and often stings.

When I read comments about the film, and about its main character, Franz Jagerstatter(played with understated grace, and sometimes flameless fire, by August Diehl whose doleful eyes make you sweat, and even bleed, with him), the writers” emphasis seems to be on Franz’s conscientious objection to an unjust war; however, Franz does not earn a martyr’s crown because he objects to an unjust war (Desmond Doss of “Hacksaw Ridge” was not a martyr), but because he refused to sign an oath swearing allegiance to Adolf Hitler. The film does not shy away from the costs of refusing to sign such an oath to such a man, and to that man’s proposed solutions for the world, but it reveals how one man saw those solutions for what they were, and stood up to them.

As the reviewer reminds us, there is a high price to pay for standing up to things; indeed, there is a high price for living a Christian life in the true sense of the word. Malick allows for how persuasive the argument can be that what is in our hearts matters more than what we say, or sign, in public. It is certainly an understandable compromise. I acknowledge that I make such compromises often. They may result in comfortable outcomes, but are they honest, courageous, truly Christian?

Hope is a virtue that, yes, may seem missing in the film. Despair is abundant. The town’s priest and bishop reinforce the argument that bowing to Hitler and the Fatherland are the right thing to do, and, achingly, the hardships never seem to let up, ending with an execution scene, which although it is not graphic, is perhaps the most harrowing sequence that I have ever seen. The glory of a “Tale of Two Cities” guillotine finale is not to be found here.

“A Hidden Life” is a film about faith, true faith (of which hope is its embryonic form) and conscience, the kind of conscience that is formed not by secular values but by belief in Christ and in His teachings. Malick’s film is a marvel and a modern day equivalent to a film from the 1960s whose last words certainly apply here: “I am the King’s good servant, but God’s first.”
My Ratings: Moral rating: Good / Moviemaking quality: 4